The United Kingdom is marching toward crashing out of the European Union next month and only a last-minute resolution or delay to Brexit can prevent a messy divorce.

On Tuesday, British Prime Minister Theresa May told the House of Commons she needed more time to salvage the EU withdrawal agreement which was soundly rejected by members of Parliament last month. But so far EU officials have refused to make any changes to the agreement, leaving Ms. May scrambling to find a solution that will win enough support among British MPs. Meanwhile, the cost of the growing uncertainty is piling up as business investment all but vanishes and the economy slows to its weakest growth rate in nearly a decade.

“The talks are at a crucial stage,” Ms. May told MPs on Tuesday. “We now all need to hold our nerve to get the changes this House requires and deliver Brexit on time.”

She promised to update Parliament at the end of the month but there is growing concern the talks will drag on into March and that the last chance to strike a deal will be at a two-day summit of EU leaders starting on March 21, just eight days before the United Kingdom is slated to leave the bloc.

It’s hard to see how Ms. May can strike a compromise that will win over critics. The main sticking point remains the so-called backstop which guarantees the Irish border will remain open by tying Northern Ireland close to EU regulations. Opponents, including dozens of Ms. May’s fellow Conservative MPs, say the backstop defeats the purpose of leaving the EU and they want it removed or amended with a time limit. The EU and Ireland have insisted the backstop must remain in order to uphold the provisions of the 1998 Good Friday Agreement which ended decades of sectarian violence and eliminated border controls between Ireland and Northern Ireland.

Ms. May provided few clues on Tuesday as to how she will bridge the impasse and simply told MPs that both sides “agreed that our teams should hold further talks to find a way forward.” She also ruled out requesting the EU to extend the March 29 deadline, although she acknowledged there was little time left to ratify an agreement.

Opposition MPs accused her of deliberately dragging out the process so that MPs will be forced to either accept her deal or risk the country leaving without an agreement. “It appears that the Prime Minister has just one real tactic: to run down the clock, hoping that members of this House can be blackmailed into supporting a deeply flawed deal,” Labour Leader Jeremy Corbyn told MPs. “She is playing for time, and playing with people’s jobs, our economic security and the future of our industries.”

Pro-Brexit Tory MPs also pressed Ms. May to obtain legally-binding changes to the backstop, something the EU has ruled out. “It’s clear from our side we are not going to reopen the withdrawal agreement, but we will continue our discussions in the coming days,” the EU’s Brexit negotiator, Michel Barnier, said Monday. Mr. Barnier has said the EU was willing to consider changes to the “political declaration” a 26-page framework for future negotiations on an EU-U.K. trade deal, but many Tory MPs have said that won’t go far enough. Guy Verhofstadt, the European Parliament’s lead Brexit official, expressed exasperation on Tuesday at Ms. May’s comments, saying that she and other British officials have offered no “concrete proposals to break the deadlock."

The Brexit uncertainty is beginning to be felt across the economy. On Monday, figures released by the Office for National Statistics showed the economy shrunk by 0.4 per cent in December and that it grew by 1.4 per cent last year, the slowest rate since 2009. Business investment dropped by 3.7 per cent in the fourth quarter of 2018, the fourth consecutive quarterly decline. On Tuesday representatives from 32 food industry groups said in a letter to Rural Affairs Minister Michael Gove that the industry was facing a crisis and companies were “now totally focused on working to mitigate the catastrophic impact of a no-deal Brexit.”

Bank of England Governor Mark Carney warned on Tuesday that the U.K economy could face a shock from a no-deal Brexit. “You have got to recognize this could go quite badly. We are 45 days before the possibility of it,” Mr. Carney said after a speech in London. “We shouldn’t be under any illusions – I’m not going to put a point estimate on it – but a no-deal, no-transition Brexit would be an economic shock for this economy.”

Carney warns of an ‘economic shock’ to Britain in event of a no-deal Brexit Subscriber content
February 12, 2019 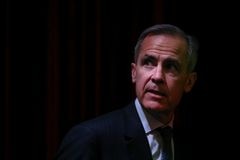 IMF chief Christine Lagarde warns Britain on Brexit: ‘It will never be as good as it is now’
February 10, 2019 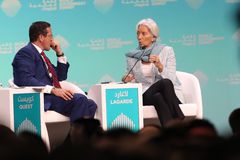