Britain’s opposition Labour Party voted Monday in support of leader Jeremy Corbyn’s bid to remain neutral on the question of whether Britain should proceed with plans to leave the European Union or change course.

Despite deep splits between Corbyn and many party members on the key Brexit question, members at a party conference in Brighton backed his approach.

Members voted down a plan that would have required the party to “campaign energetically” for a second referendum on Brexit and to argue that Britain should decide to remain part of the EU, not leave.

There was some confusion about the vote results, and some calls for a recount.

The series of three votes leaves the party’s position somewhat ambiguous, reflecting the fact that the membership in general prefers to stay in the EU while Corbyn and some in his inner circle prefer not to take a clear stance.

If unchanged, it means that the party would not take an active “remain” or “leave” position if there is another referendum on the question of EU membership, and would seek to remain neutral in a national election.

Corbyn’s focus is on winning a general election – expected within months – and bringing his left-wing party to power.

He and the party’s divided National Executive Committee do not want Labour to spell out a “remain” or “leave” stance ahead of a general election, even though the divisive issue is by far the most prominent policy matter on the political horizon.

Their complicated scenario calls for the party to win an election, take power, negotiate a new deal with the EU, schedule a referendum on whether to endorse the new deal or remain in the EU, then hold a special party conference to determine the party’s position on the matter.

Corbyn is taking a cautious stance in part out of concerns that he could alienate Labour voters in districts that in the 2016 Brexit referendum voted to leave the EU. He has always been lukewarm about the benefits of staying in the EU and prefers in his speeches to focus instead on growing economic inequality, workers’ rights and other social issues, including a shorter working week.

He faces some opposition from party members determined to keep Britain in the EU.

Mike Buckley, director of the grassroots lobbying group Labour for a Public Vote, says that a vast majority of party members want to remain in the EU under all circumstances. He says voters need to have a clear understanding of Labour’s stance.

The party has called for a referendum but has not specified what its position will be. Buckley says making its position clear could only help Labour.

“If we add a commitment to Remain, we will at last be providing the leadership the country needs,” he said.

The country remains deeply divided over Brexit, which is set to take place on Oct. 31 unless the deadline is extended. The split in opinion is reflected in the political spectrum as parties jockey for position ahead of an anticipated election.

The Conservative Party led by Prime Minister Boris Johnson and the Brexit Party headed by Nigel Farage are outspoken advocates of leaving the EU. The resurgent Liberal Democrats say they will revoke Article 50 (which triggered the withdrawal) and end the Brexit process altogether if they come to power. Brexit is also opposed by the Scottish National Party and many of the smaller parties. 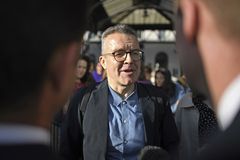 Britain’s Supreme Court to rule on legality of Parliament shutdown next week after unprecedented hearing
September 19, 2019