British Prime Minister Boris Johnson has been released from St. Thomas’ Hospital in London but he is not expected to return to work for a couple of weeks.

In a video statement on Sunday, Mr. Johnson thanked hospital staff and said the National Health Service “has saved my life, no question.” He also named several doctors and two nurses, in particular, “who stood by my bedside for 48 hours when things could have gone either way.”

“I want to pay my own thanks to the utterly brilliant doctors, leaders in their fields, men and women but several of them for some reason called Nick, who took some crucial decisions a few days ago for which I will be grateful for the rest of my life,” he added.

It is hard to find the words to express my debt to the NHS for saving my life.

The efforts of millions of people across this country to stay home are worth it. Together we will overcome this challenge, as we have overcome so many challenges in the past. #StayHomeSaveLives pic.twitter.com/HK7Ch8BMB5

He also offered a rousing call to rally around the effort to contain the novel coronavirus that causes COVID-19. “We are making progress in this national battle because the British public formed a human shield around this country’s greatest national asset – our National Health Service,” he said.

Mr. Johnson, 55, tested positive for COVID-19 on March 27. He became increasingly ill over the next 10 days and was admitted to St. Thomas’ on April 5. At the time, officials said the move was precautionary but the Prime Minister’s condition worsened and he was put into the intensive care unit the following day. He remained in the ICU until last Thursday when he improved enough to return to a hospital ward.

Mr. Johnson will now spend time recovering at Chequers, the Prime Minister’s official retreat northwest of London. “On the advice of his medical team, the [Prime Minister] will not be immediately returning to work,” said a statement from Downing Street on Sunday.

"I’m delighted that he’s out of hospital and he’s recovered,” Health Minister Matt Hancock said during a press conference on Sunday. “There isn’t any advice on how long, that will be a clinical decision for his doctors to take with him. The government is operating perfectly efficiently within the strategy that he set out.”

The Prime Minister’s fiancée, Carrie Symonds, who is pregnant, had been isolating for several days last month after developing some symptoms of the virus. She recovered last week and on Sunday she expressed thanks to the staff at St. Thomas’. "There were times last week that were very dark indeed,” she said on Twitter. “My heart goes out to all those in similar situations, worried sick about their loved ones. ... Today I’m feeling incredibly lucky.”

Mr. Johnson’s release was a bit of good news on a day on which Britain surpassed 10,000 deaths from the outbreak. The toll hit 10,612 on Sunday and some experts said Britain was on track to record the highest number of fatalities in Europe.

“I do hope that we are coming close to the numbers reducing. But yes, the UK is likely to be certainly one of the worst, if not the worst, affected country in Europe,” Jeremy Farrar, a pandemics expert on the government’s Scientific Advisory Group for Emergencies, told BBC on Sunday.

There has been concern in Britain that the government didn’t follow the example of Germany, where the number of deaths so far is fewer than 3,000. German health officials have systematically isolated anyone infected with the virus and quickly tracked and tested all of their contacts. As a result, Germany conducts more than 100,000 tests a day while the daily total in Britain is around 13,000. Mr. Hancock has set a goal of reaching 100,000 by the end of April but progress has been slow.

Amid the grim news, health experts pointed to some positive signs on Sunday. The number of confirmed cases has climbed above 84,000 but the daily growth figure has been stabilizing, suggesting the peak could be near. The NHS has also not been overwhelmed, including in London, which has seen the worst of the country’s outbreak. “We are able to support anybody who needs it in the NHS,” Mr. Hancock said Sunday.

The government faces a difficult decision in the coming days about whether to extend a near total lockdown Mr. Johnson imposed three weeks ago. The restrictions are supposed to be reviewed this week and the government is widely expected to extend them, although it’s not clear for how long.

Mr. Johnson had been eager to reopen the economy as soon as possible but he is unlikely to play much of a role in this week’s decision. Most of his duties as Prime Minister have been assumed by Foreign Secretary Dominic Raab, who indicated last week that it was too early to ease the lockdown. 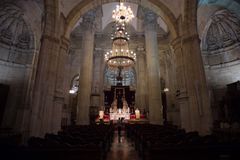 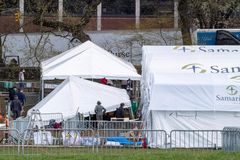 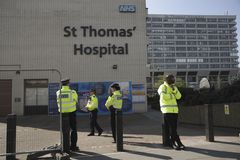