British Prime Minister Theresa May is scrambling to salvage her Brexit strategy after being rebuffed and mocked by European Union leaders who said her plan won’t work.

Ms. May took to television on Friday to defend her position and issue a sharp rebuke to her EU counterparts. “Throughout this process, I have treated the EU with nothing but respect. The U.K. expects the same,” she said. “A good relationship at the end of this process depends on it. At this late stage in the negotiations, it is not acceptable to simply reject the other side’s proposals without a detailed explanation and counterproposals.” She added that Britain was prepared to walk away from the talks without a deal.

Ms. May had clearly been rattled by the response to her Brexit plan by EU leaders during a summit in Salzburg, Austria, this week. She went into the meeting confident the other leaders would be open to her proposal, which calls for Britain to effectively remain in EU’s single market but only for trade in goods, not services. Instead, the EU leaders flatly rejected the idea, with European Council President Donald Tusk saying it “will not work … because it risks undermining the single market.” Later, Mr. Tusk posted a picture on Instagram showing him offering Ms. May a tray of cakes. He added the caption, “A piece of cake, perhaps? Sorry, no cherries,” a reference to the EU’s insistence that Ms. May cannot cherry-pick parts of the single market.

The rejection has left Ms. May’s strategy in limbo and raised concern the country will leave the EU next March without any agreement, something business groups and others have said could have devastating economic consequences. Sterling fell by as much as 1.5 per cent against the U.S. dollar on Friday, its biggest daily drop this year. “The events of the last 24 hours have made one thing abundantly clear – negotiators on both sides must change tack,” said Carolyn Fairbairn, director-general of the Confederation of British Industry. “Rejection of [Ms. May’s plan] helps nobody. The stakes could not be higher. Jobs, wages and living standards are at risk, on both sides of the Channel.“

The impasse could not have come at a worse time for Ms. May. She’s already been facing growing pressure from members of her Conservative Party caucus to scrap the plan, known as Chequers because it was formulated at the Prime Minister’s rural retreat. Up to 40 Tory members of Parliament have come out against the plan, arguing that it keeps Britain too closely tied to the EU and does not live up to the principle of Brexit. Another group of pro-European Tories has also criticized it saying it doesn’t go far enough in ensuring British businesses will have unfettered access to the EU market for goods and services. The party begins its annual conference in Birmingham next Sunday and Ms. May had been hoping to go into the convention with something positive from the EU. Now she’ll face even more pressure to drop the plan and increasing challenges to her leadership, particularly from former foreign secretary Boris Johnson.

Britain is also running out of time to negotiate a deal with the EU. Britain formally leaves the EU on March 29, 2019, and both sides have been negotiating a withdrawal agreement and the terms of the future relationship. The discussions have bogged down over Ms. May’s proposal and the future of the Irish border. Both sides are trying to avoid a hard border that would include customs checks, as that would go against the spirit of the 1998 Good Friday Agreement that ended decades of sectarian violence. The EU has proposed a “backstop” that would keep Northern Ireland within the single market, but Ms. May has rejected that idea saying it would leave the province in a different situation from the rest of Britain. She has insisted that her plan would ensure an open border.

On Friday she struck a defiant tone, signalling that it was up to the EU to come up with new proposals. “So we now need to hear from the EU what the real issues are and what their alternative is so that we can discuss them. Until we do, we cannot make progress,” she said. Britain’s May appeals to EU leaders but no sign of Brexit deal
September 19, 2018 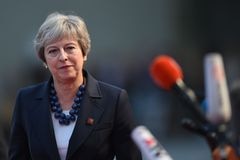 Britain’s May says Brexit deal is near, calls on EU to show ‘goodwill and determination’
September 18, 2018 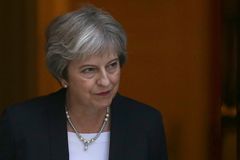