Gavin Newsom had every reason to think he was safe. A Democrat governor in one of the most heavily Democratic states in the U.S., he occupied a political stronghold buttressed by a massive electoral win that catapulted him to office in 2018 with nearly 62 per cent of the vote, a personal popularity that has remained above 55 per cent, and a track record of leadership that has included a robust pandemic response and, in an age of viral deficits, a state budget surplus of at least US$38-billion.

But Mr. Newsom has spent the summer battling for his political life after a recall effort threatened to remove him from office and elevate in his stead a conservative talk-radio host.

“This is the fourth time in American history a recall of an American governor has gotten on the ballot,” said Mike Netter, a founding member of the recall campaign. He uses superlatives to describe the effort, calling it an unprecedented volunteer initiative to use a century-old constitutional measure to boot out a democratically elected leader in favour of the radio host or dozens of other contenders.

In California, he said, “the people have become the underdog – and when the hell did that happen?”

“I’m going to tell you officially who my favourite candidate is. It’s anybody but Gavin,” he said. “That’s what California is saying. We’re sick of this. We need to make a change.”

That rhetoric does not match prevote polls, which suggest Mr. Newsom is likely to retain his seat Tuesday in a recall election, a victory for the progressive forces that also replaced Donald Trump with Joe Biden as president. It is nonetheless possible that he will be forced to make way for Larry Elder, a fiery conservative talk-radio host from Los Angeles who has backed a total ban on abortions and supported ridding schools of sexual education, elements of which he has called “pornographic.”

The anxiety in Mr. Newsom’s camp is evident in the profile of those who have come to his side during the campaign, including Mr. Biden, Vice President Kamala Harris and former president Barack Obama.

And the ferocity of the resistance behind the recall in Democratic California is perhaps the most clear sign that the anti-establishment upheaval that made Mr. Trump a president continues to remain one of the most defining elements of U.S. democracy.

The bid to recall Mr. Newsom cannot be described as undemocratic: It makes use of a provision added to the constitution in 1911. Nineteen U.S. states have mechanisms to recall governors.

Still, for such an effort to make it onto a ballot is rare. The California governor recall vote is only the fourth in U.S. history; in two of the previous attempts, voters deposed the sitting governor. The most memorable such effort removed governor Gray Davis in 2003 and replaced him with Arnold Schwarzenegger, who profited from the publicity around the release that year of Terminator 3: Rise of the Machines.

California’s recall mechanism is unusual in that it offers voters two questions on Tuesday. Should the office-holder be removed? And who should serve as a successor? If a majority answers yes to the first question, the governorship goes to the person with the most votes on the second – a list that cannot include the incumbent. That creates a situation where a governor who won nearly 62 per cent of the vote could be replaced by someone who earned far less support.

Still, Mr. Davis and Mr. Newsom entered the recall in very different places. At the time of his fall to Mr. Schwarzenegger, Mr. Davis scored comparatively low in voter approval polls and was grappling with a gaping state deficit.

Mr. Newsom shares none of those weaknesses.

For this recall, then, “what’s astonishing about it is that they even tried,” said Henry Brady, a political scientist at the University of California, Berkeley who is past president of the American Political Science Association.

He called it a reflection of “the politics we now have, which is that Republicans see themselves as a decided minority. They know they can’t win majorities in many places.” His assessment of the strategy on the U.S. political right: “If you can’t win it fair and square with elections, you’re going to try to win it by hook or by crook.”

He has called for changes to the recall system in California that, he hopes, can strengthen its democracy.

But the campaign against Mr. Newsom has brought to the fore real weaknesses in the state. Mr. Elder has loudly decried the inability of the sitting Governor – or his predecessors – to alleviate some of the state’s most difficult ailments, including a crisis in housing prices and a series of corollary problems: rising homelessness and evidence that people are leaving the state.

And where political experts see the recall bringing chaos, backers see a disenchanted electorate. Take Kevin Faulconer, a prominent Republican among those also running to replace Mr. Newsom. Despite a lengthy record of service, including six years as mayor of San Diego, polling shows Mr. Faulconer with roughly 5-per-cent support.

That’s less than a fifth of what polls show for Mr. Elder.

For Mr. Netter, however, Mr. Elder’s rise to the top of the polls suggests “California is desperate for leadership,” he said.

Even if the recall involves California alone, it matters beyond the state’s borders, argued Stephanie Suela, the recall co-ordinator in the state’s Sacramento County. A Democrat for decades, she now calls herself a libertarian. The recall, she said, “really has nothing to do with Donald Trump.”

But even if Mr. Trump isn’t on the ballot, his shadow hangs over it – and has perhaps been enlarged by it, too.

The recall is “going to tell other people that they don’t need to be afraid to question their politicians,” Ms. Suela said. “They need to stand up.” 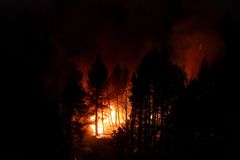 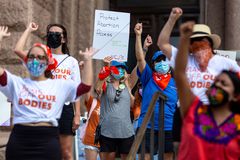 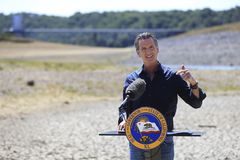