It had already been a difficult enough year for Christine Pascoe. She recovered from COVID-19 this spring just in time for local public-health officials to shutter her small electrolysis business as part of an effort to slow the spread of the virus.

The latest blow came last week, when Ms. Pascoe was forced to flee her home as wildfires encircled the small community of Ben Lomond, tucked into the mountains above Silicon Valley.

“Stress, just unbelievable stress,” Ms. Pascoe said while sitting in front of a Red Cross shelter in nearby Santa Cruz, where evacuees have been sleeping in individual tents set up inside an auditorium to enforce physical distancing. “It’s been probably the worst thing in my life.”

In recent days, California’s COVID-19 epidemic has collided head-on with the state’s long-standing climate crisis, which has sparked an unseasonably early and aggressive start to the annual wildfire season. A rare summer lightning storm earlier this month has started nearly 700 fires, burning an area the size of Prince Edward Island and forcing nearly 140,000 people to flee their homes.

The wildfires have slowed the state’s efforts to combat the pandemic at a time when California was looking to start reopening businesses and schools. The state reported that it was testing half as many people a day as it did before the fires, which have shut down almost a dozen COVID-19 testing sites.

The pandemic has also hampered efforts to tackle the blazes, with fewer firefighters available even as crews have been stretched thin by the sheer number of fires. At the same time, the wildfires have raised concerns that large-scale evacuations could cause a new wave of infections in hard-hit communities. “Any activity or action that increases mixing among people who haven’t been together in quite some time creates a transmission risk,” said Mark Ghaly, California’s health and human services secretary.

California lawmakers were scrambling to find new money for wildfire suppression before the legislative session ended this week. But that too was hindered after the state Senate was forced to shut down its in-person session because a senator tested positive for COVID-19.

The twin perils of a pandemic and wildfires have been particularly hard on small retail businesses, many of whom had received approval to move their operations outdoors, only to be forced to close down because of poor air quality from the fires.

“The good news is the earthquake has been postponed until further notice,” joked Dave Jones, who operates a small jewellery business in Santa Cruz, a coastal city at the epicentre of one of the state’s larger wildfires. Mr. Jones used to find many of his customers through flea markets. But those have been closed because of the pandemic, and few customers have been willing to brave the smoky skies to visit the table Mr. Jones set up in the city’s downtown. “It’s a nightmare,” he said.

Public-health officials are also grappling with how to advise Californians to deal with the competing risks from COVID-19 and the fires.

After urging residents earlier in the year not to buy N95 respirators so they could be reserved for essential workers, health officials are now warning that cloth face coverings won’t protect against wildfire smoke, which can exacerbate respiratory illnesses such as COVID-19. And having encouraged vulnerable populations to shelter in place, officials are struggling to persuade residents – particularly seniors in the quaint mountain towns that are in the path of wildfires – to evacuate.

“Now we’re telling many folks who haven’t left their homes for months, who are worried about exposure to COVID, that it’s safer to leave than to stay,” Dr. Ghaly said.

The pandemic has similarly thwarted firefighting efforts at a time when the state is battling a huge number of simultaneous blazes, including two of the largest in California’s history.

Typically, fire crews would be assisted by thousands of prison inmates who are paid to clear debris and cut firebreaks. But COVID-19 outbreaks in California’s prison system forced a wildfire training facility to close and prompted the state to release thousands of prisoners early, reducing the number available.

Firefighters are taking precautions to protect against COVID-19, including doubling the number of trailers used for resting between shifts, adding handwashing stations and enforcing physical distancing during meals. “We are making attempts to fight two different fights basically,” said Daniel Potter, a spokesperson for Cal Fire, the state fire agency. “The pandemic and the firefight itself.”

California Governor Gavin Newsom has asked for help from firefighters in other states, as well as Canada and Australia. But Canada has yet to send any fire crews to California, in part because agencies were still working through pandemic safety protocols.

“COVID is certainly playing a bit of a role this year and made things a little more complicated,” said Edwin Gillis, manager of the Canadian Interagency Forest Fire Centre, which co-ordinates mutual aid among provincial and territorial fire agencies as well as Parks Canada.

Officials were still sorting out how crews could travel safely in groups to fire locations across the border, how to physically distance in fire camps, and what would happen if a Canadian firefighter tests positive for COVID-19, although Mr. Gillis anticipated having some fire crews in Northern California as early as next week.

California health workers are also scrambling to prevent a wave of new infections inside crowded evacuation centres. Shelters have proved to be a breeding ground for illness during past wildfires, including a norovirus outbreak that tore through centres housing evacuees from a deadly fire two years ago in Paradise, Calif.

California’s government has already moved nearly 1,000 evacuees into hotels and motels. Inside shelters, evacuees sleep on cots in tents, eat boxed meals rather than from buffets, and are subjected to temperature checks and health screenings.

At the shelter where Ms. Pascoe was staying, evacuees with symptoms had been moved into a separate area of the auditorium. “They’re doing the proper quarantining, but still you hear somebody have an extended coughing fit and it’s like: oh no,” she said.

For some, however, the wildfires have brought a welcome reprieve from the pandemic, drastically curbing the crowds that had flocked from California’s cities to mountain and beach communities that are now blanketed in smoke.

“Our coastline was so jam-packed. It was crazy,” said Patty Bianco, who fled from her home in Bonny Doon, a mountain community near Santa Cruz that has been among the hardest hit by the blazes. “Since the fires, it’s actually been better for us as far as COVID. They’re keeping people away.” 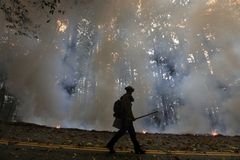 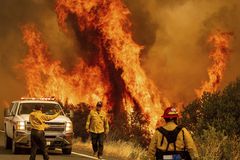