Tim Schneider has been living on and off the streets for more than 20 years. But since California declared a statewide lockdown last month, the former Red Cross worker has been staying in a San Diego-area motel.

His new accommodations are courtesy of a government program to lease 15,000 hotel rooms to house homeless residents in hopes of slowing the spread of the novel coronavirus.

For Mr. Schneider, 54, who has health conditions that put him at risk if he contracts the virus, the room with a queen bed, three daily meals, and regular check-ins by social workers is better than the bike trail near a beach where he was camping.

But the reprieve from homelessness could end soon. His voucher for the hotel room is good until May 3 and Mr. Schneider is waiting to hear if it will be renewed. Once the pandemic is over, he expects to go back to the street. “I don’t really have a plan for afterward,” he said. “I’ll probably just carry on doing what I do and trying to survive.”

The coronavirus pandemic has forced California into a new battle with its long-standing homeless crisis. With more than 150,000 homeless residents – a figure that has grown by 50,000 since 2016 – California has the United States’ largest unsheltered population. Even before the pandemic, the swelling number of people living in crowded tent encampments that line city streets had made homelessness a top political issue for voters in the state.

California has earned plaudits for early interventions that have limited COVID-19 cases in the state – 43,000 cases and 1,755 deaths as of Sunday. But advocates warn that efforts to house the homeless in hotels and shelters during the pandemic have not gone far enough and that the state lacks a viable plan for how to protect its homeless population once the pandemic ends.

Some fear that outbreaks among homeless residents could spark a new wave of infections that could hamper the state’s efforts to reopen its economy. “We’re losing, in cities, billions of dollars and if this keeps bouncing around the street or in shelters, how much longer are we delaying the opening?” said Chris Herring, a sociologist completing a PhD at the University of California, Berkeley. He spent more than a year living among San Francisco’s homeless population for his research. “That’s the real economic cost of this.”

The issue is particularly challenging for Governor Gavin Newsom, who has staked his governorship on tackling homelessness. The economic fallout from the pandemic has cast doubt on the first-term governor’s ability to fund his most ambitious proposals, including billions in new spending for homelessness and a plan to build 3.5 million new homes by 2025.

Yet California can’t afford to ignore the issue during a public-health crisis. The state has seen COVID-19 outbreaks in homeless shelters, including among more than 100 people at a single shelter in San Francisco.

Many voters also view the squalid conditions in tent encampments as directly connected to the state’s rising COVID-19 numbers, political analyst Sherry Bebitch Jeffe said. “Whether or not it’s a dramatic cause, the perception among many Californians is that the homeless situation is part of the coronavirus problem,” she said.

So far, the state’s plans to tackle homelessness have focused on repurposing hotels shuttered amid the pandemic to house homeless residents who have tested positive and those who are elderly or deemed medically vulnerable.

Both Mr. Newsom and several big city mayors have also proposed buying out hotels to turn into long-term housing once the pandemic ends.

For hotels, however, selling to state or local governments is fraught with challenges, said Lynn Mohrfeld, chief executive officer of the California Hotel & Lodging Association. Many are locked into long-term franchise agreements with hotel brands and have secured financing and insurance based on the fact that they are serving tourists, not operating as public housing.

He has heard of a handful of hotels that have signed lease-to-own agreements with the state, but expects the program to net only modest gains for new housing. “The State of California couldn’t solve homelessness before the pandemic,” he said. “I’m not sure that they can solve it right now with a few hotel rooms and a pandemic.”

Still, some are hopeful that the idea of turning hotels into homeless shelters will bear fruit. An economic recession is an opportunity for governments and non-profits to buy up distressed properties for attractive prices, said Randy Shaw, executive director of San Francisco’s Tenderloin Housing Clinic.

“This is a down market,” he said. “Everyone kept saying we should have done a better job after the down market in 2008. Here’s a chance to learn from those mistakes.”

It’s unclear exactly how much money the state will even have to buy hotels and finance continuing homeless services in the properties.

Earlier this month, government officials said they planned to pass a budget that would have restricted new spending to wildfire prevention, COVID-19 response and homelessness. But officials now concede that the state likely won’t have the funds for even that modest spending.

Political leaders say they are hopeful California will include some new funding for homeless services as part of a broader financial package to tackle COVID-19, but won’t know how much until tax returns are filed in July. “Part of the reason homelessness is still on the table is because in order for us to better manage the virus, we are going to need to move people off the streets,” said Phil Ting, who chairs the state assembly’s budget committee.

Holly Mitchell, who chairs the budget committee in the state Senate, says she believes the coronavirus outbreak may actually renew California’s political will to solve its homeless crisis.

“One thing this public-health pandemic has done is crystallize for every California resident the life experience of our vulnerable populations,” she said.

Inmates, staff of federal prison in B.C. get masks as authorities step up hygiene
April 26, 2020 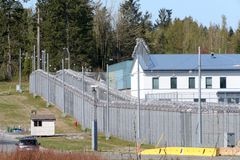