Photography and video by Wu Hao/The Globe and Mail

The whims of atmospheric circulation have not been kind to northern China. While the rain pours onto the verdant stretches of China’s south, its north, with half the country’s population, goes parched with less than a fifth of its freshwater resources.

Water is generally considered scarce in a given location when its availability falls below 500 cubic metres per person in a year. Northern China averages 184 cubic metres for each of its 130 million people; Beijing alone is short an estimated total of 400 million cubic metres of water a year, or nearly two days of the Fraser River’s average output. Other statistics are equally grim: In 1990, China counted 50,000 rivers. Today, just 22,000.

So few would have accused then-premier Wen Jiabao of exaggeration when he warned, in 2005, that water shortages threatened “the very survival of the Chinese nation.”

It was a topic that helped catapult Ma Jun from journalist to pre-eminent environmentalist after the 1999 publication of his book China’s Water Crisis, in which he warned that the country had grown “by robbing nature of its resources.”

Two decades later, Mr. Ma has a very different appraisal. China, through dint of brute force, enormous expenditure and a willingness to remake the country’s hydrological map, has “quenched the thirst of the North.” 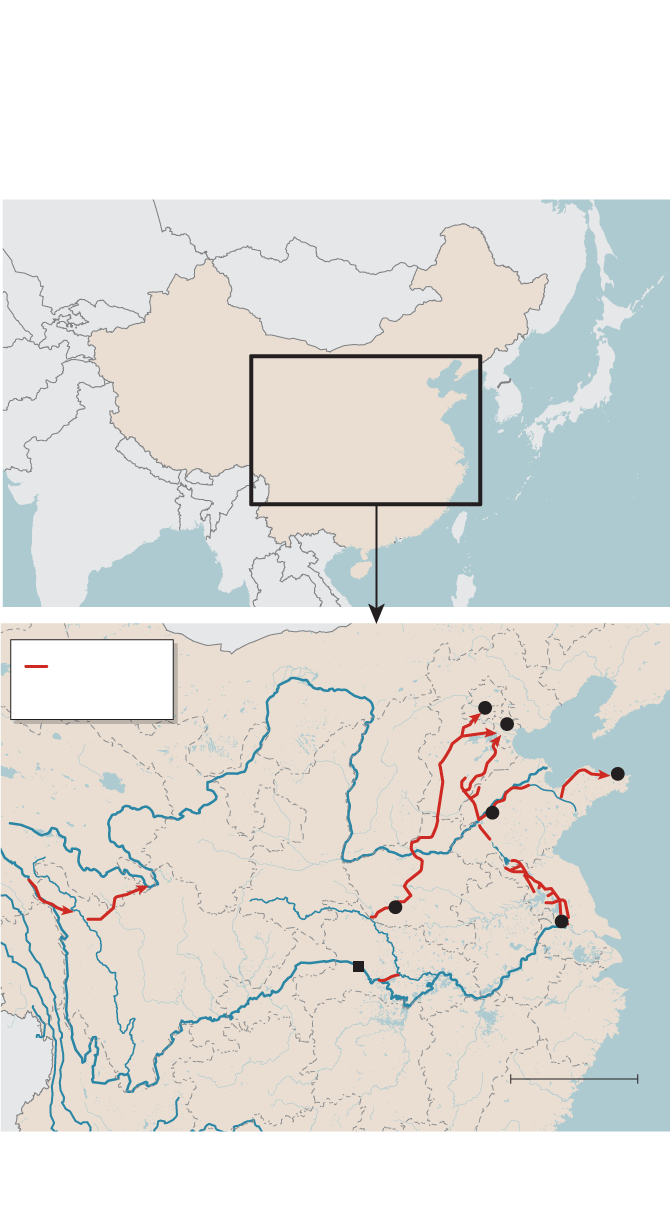 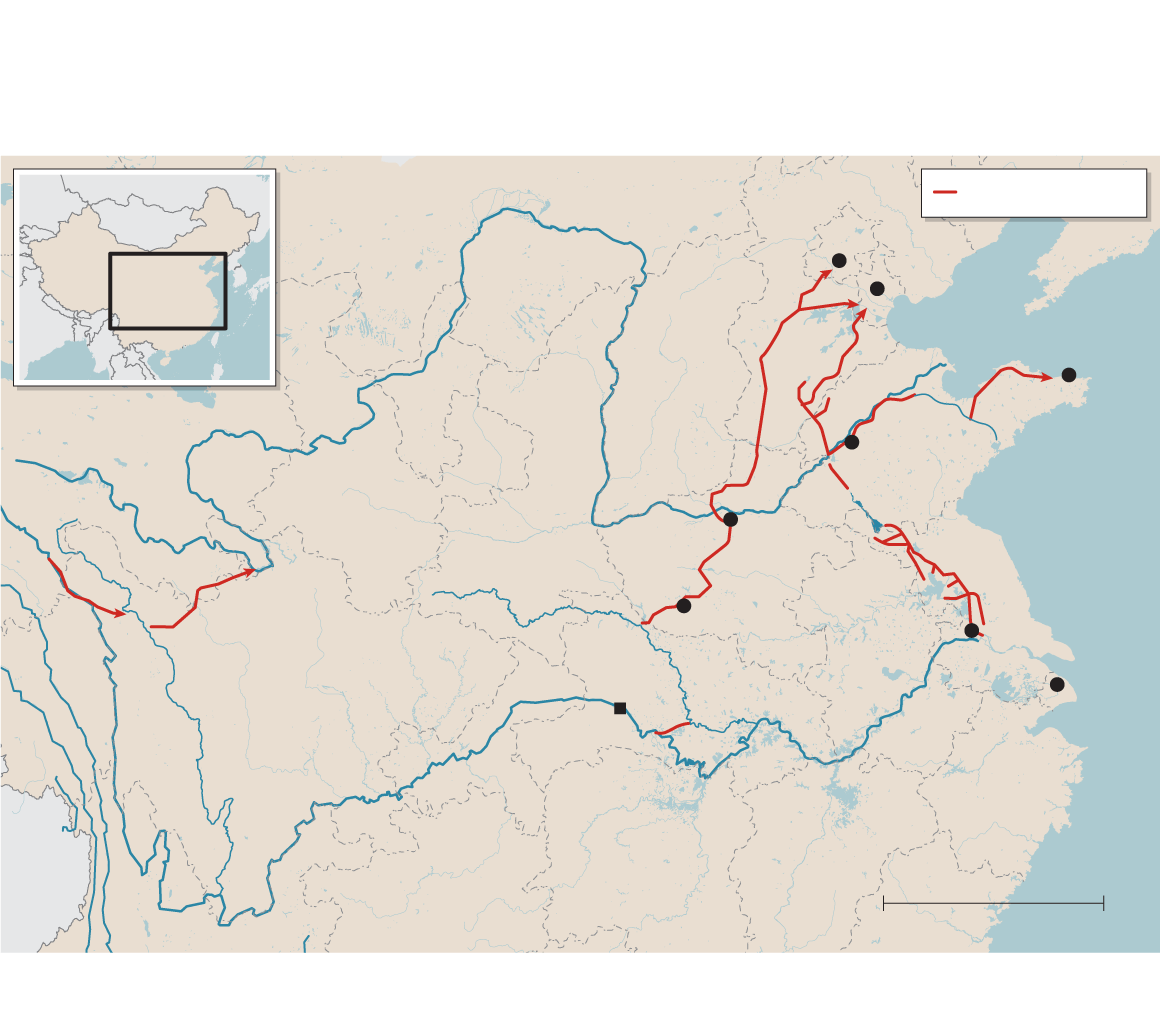 All that it required was bringing the waters of the Yangtze river system more than 1,000 kilometres from their natural course, a re-engineering of earth’s natural systems with few parallels in human history.

In the process, China’s leaders have also ensured the quality of water flowing from taps in Beijing and other northern cities is “significantly better.”

For nearly 40 years, Beijing’s water table steadily retreated, sinking some 15 metres and bringing fears of settling earth and frightening shortages. Now, however, the water table has begun to recover, surging back more than a metre in the past two years alone.

“The water crisis used to loom large over all of these northern cities – about 40 of them, with at least 10 under threat of a real crisis,” Mr. Ma said. “But now it’s different. And in the short to mid-term that has been basically alleviated.”

It is a major achievement for China, and an object lesson in what its Communist Party leaders have been able to achieve by focusing the power of the state on immense problems that once seemed nearly impossible to solve.

China’s response to its water crisis is less visually evident than its war on smog, which can also claim impressive results. In Beijing, a city where industrial air pollution regularly dimmed the sun, the average annual air-quality index has improved by 39 per cent since 2014. In 2020, the capital’s air was deemed “excellent” for nearly one in three days.

It is no longer hard to imagine Chinese leaders meeting the goal they recently set for themselves to “basically eliminate heavily polluted weather” nationwide by 2035.

Perhaps, too, progress on smog presages success in eradicating other pollutants, such as carbon – an optimistic omen for Beijing’s other recent pledge, to achieve carbon neutrality by 2060.

The country, after all, has shown itself able to redirect the waters of its mightiest river system.

For Beijing’s water woes, the solution begins some 1,267 kilometres away, at the Danjiangkou Reservoir on the Han River, the longest of the Yangtze tributaries. It is also the starting point for the central route of the South-to-North Water Diversion Project, the bland name for a project of breathtaking scale.

The initiative was famously described by Mao Zedong in 1952, when he said: “The south has plenty of water and the north lacks it, so if possible why not borrow some?”

The canals that make up the project divert the waters of the Yangtze and its tributaries. Today, just more than seven out of every 10 cups of water poured in Beijing are delivered by this achievement of infrastructure.

The scale of the project in many ways eclipses even the Three Gorges Dam, which transformed 660 kilometres of the Yangtze River into a reservoir. Three water-diversion routes have been planned, two already built: the central and eastern lines. At $57-billion in construction costs, their budget has already exceeded the Three Gorges by 50 per cent. Some 400,000 people were relocated to make way for the new canals.

Yet, as a test of China’s ability to solve a problem of immense scale, it has been a remarkable success.

“We can see from the south-to-north water transfer that China possesses major advantages when it comes to large-scale projects,” said Xia Qing, a Chinese water expert. Before the project’s completion, critics raised doubts about the quality of water it would deliver, since it passed through areas long plagued by toxic industrial runoff.

But officials along the route shut down offenders, and the water quality sluiced into Beijing is measurably better than what the city previously enjoyed.

“For the city of Beijing, the water problem can be considered resolved,” said Mr. Xia, who has been a central figure in China’s water plans. Now retired, he previously worked as an engineer at the Chinese Research Academy of Environmental Sciences and helped to direct construction of the South-to-North Water Diversion Project, personally reporting on progress to the country’s top leadership, including Mr. Wen and Li Peng, another former Chinese premier.

Slaking the north’s thirst has also trained new national attention on other problems. The Yangtze River’s mounting importance as a source of national drinking water has elevated efforts to protect the country’s best-known waterway. Last year, China enacted a 10-year fishing ban on some 332 Yangtze River conservation sites. Earlier this year, Beijing approved a Yangtze River Protection Law that prohibits the transportation of many toxic and dangerous chemicals on the river.

More difficult will be undoing a toxic past in which water was made subservient to industrial growth. What matters most to China’s future is not merely whether it has enough water, but whether it has sufficient usable water, an international group of scholars, including from the Chinese Academy of Sciences and the University of Oxford, warned in a major research paper published last year in Nature.

Together, problems with quality and quantity mean more than half of the population – between 700 million and 1.36 billion – are affected by concerns over sufficient availability of good water, they calculated.

For China, they concluded, canal-building is not enough. Conservation and environmental restoration are also needed. Because, for now, water scarcity remains “one of the most significant threats that challenge sustainable development.”

And while China has poured money into engineering solutions, it has shown less success in conservation. Governments across the country have struggled to use water more efficiently in agriculture, which uses two-thirds of the country’s supply – some pumped through irrigation systems that squander vast volumes. On average, water-transportation systems in China leak 20 per cent of what they carry. Better technology is available, but expensive, and it has proven difficult to persuade governments to spend in ways that might hurt economic performance.

Changes in agricultural practice, too, require shifting behaviours across a population of farmers that China officially tallies at 570 million, or 40 per cent of the population. “You must give people something as motivation for them to respond to plans for saving water,” Mr. Xia said.

Besides the water transfer program, Mr. Xia has also worked to resolve another difficult problem: reviving the Haihe River system, whose tributaries pass by Beijing, but routinely run dry as they travel to Bohai Bay. The volume of water flowing through the Haihe system has fallen by more than a third over the past two decades.

“We hope to get the water volume back to the two-billion level within 10 to 20 years,” Mr. Xia said.

But all of China’s recent success in hydrological engineering has, for now, created such abundance that it is making other problems more difficult to solve.

Reviving the Haihe basin, for example, will require a massive conservation project – and rather than conserve, cities such as Beijing have responded to their new canal-borne water riches by using more. Across northern China, cities are building man-made lakes and landscaping parks with fountains. In Beijing, an average person now uses more water than in some European cities blessed with far more abundant supplies.

“I do think that is wrong,” said Mr. Ma. “In Beijing, we all open the tap and it looks like the water just flows so naturally here. But actually, very few people know about the extreme high cost.”

Nathan VanderKlippe has been The Globe’s Beijing-based correspondent since 2013 and has seen the ambitions and discontents of Xi Jinping’s China take shape. He outlines some key areas to watch around China’s political and economic ambitions as it also represses ethnic minorities and holds two Canadians captive.

Alberta calls for national security rules for academics to prevent intellectual property transfer to China
May 25, 2021
Extreme weather kills 21 runners in China during ultramarathon
May 23, 2021
At least three dead, 27 hurt as earthquake shakes southwest China
May 22, 2021
What does China’s future hold? Insights from The Globe’s correspondent in Beijing
Video
June 10, 2021