Vladimir Putin and Recep Tayyip Erdogan are strongmen leaders, both used to getting their own way. But if the Russian and Turkish presidents want to avoid a direct clash between their formidable militaries, at least one of them is going to have to back down.

The two leaders will meet Thursday in Moscow, hoping to de-escalate a combustible situation in the northeastern Syrian province of Idlib, which has NATO member Turkey on the verge of conflict with nuclear-armed Russia.

Idlib has seen seven bloody days of something close to all-out war between the Turkish army and Syrian President Bashar al-Assad’s regime, which is supported by Moscow.

In an effort to internationalize the Idlib crisis, Mr. Erdogan’s government has transported tens of thousands of refugees to the borders of Europe this week, ending a 2015 deal that saw the European Union pay Turkey US$6-billion to prevent refugees from travelling any further. On Wednesday, Mr. Erdogan said he had turned down an EU offer of another US$1-billion, saying Turkey had spent US$40-billion of its own money on refugees since 2015.

Much of what happens next will be decided between Mr. Putin and Mr. Erdogan, like-minded authoritarians who have maintained a strong personal relationship even as they backed opposing sides in the Syrian civil war. As recently as a December summit, NATO leaders were fretting about the increasingly close ties between Moscow and Ankara, which saw Turkey purchase sophisticated Russian anti-aircraft systems.

Both Mr. Erdogan and Kremlin spokesman Dmitry Peskov expressed optimism Wednesday that the Moscow meeting would produce some kind of ceasefire in Idlib. But past deals have collapsed, and it’s uncertain how long any new arrangement will hold.

The personal warmth between Mr. Putin and Mr. Erdogan has always been at odds with the cold realities on the ground in Syria – and specifically in Idlib, which is the last part of the country outside the Assad regime’s control.

Mr. Erdogan wants to prevent a fresh influx of refugees into Turkey – there are currently an estimated one million people living in makeshift camps on the Syrian side of the border with Turkey – by creating a “safe zone” in Idlib to which some of the 3.7 million Syrian refugees living in Turkey could also return.

Those aims are fundamentally at odds with Mr. Putin’s goal of helping Mr. Assad recapture his entire country, in large part so Mr. Putin can declare victory and bring Russian troops home. The end of the war would also allow Moscow to begin profiting economically from its client state.

The latest fighting, centred on the strategically critical city of Saraqeb, began on Feb. 27, when 34 Turkish soldiers were killed in an air strike. Turkey lashed out ferociously, using rocket artillery and a “drone swarm” to hit back at the Syrian military. Thousands of Turkish troops then poured into Idlib province to support anti-Assad rebels, the first Turkish military operation directly targeting Mr. Assad’s forces.

According to the British-based Syrian Observatory for Human Rights, at least 183 pro-regime fighters – regular Syrian troops, as well as Iranian militiamen and members of Lebanon’s Hezbollah militia – have been killed in the Turkish offensive. Three Syrian warplanes have also been shot down.

Turkey has so far been careful not to directly blame Russia for the Feb. 27 attack, though it has said Moscow was made aware of the position of the Turkish troops before the air strike. In the first hours and days of Turkey’s response, Russia – which has near-complete control of the skies over Syria – appeared to allow Mr. Erdogan to take his revenge against Mr. Assad’s forces.

But Moscow’s patience appears to be wearing thin. On Monday, the Kremlin said it could not guarantee the safety of Turkish planes flying over Idlib. On Wednesday, a spokesman for Russia’s Ministry of Defence condemned Turkey for allowing “terrorists” operating close to Turkish positions in Idlib to launch drone attacks against Russia’s Hmeymim air base, in western Syria.

A patchwork of anti-Assad groups use the Turkish-controlled part of Idlib as a base, including al-Qaeda-linked Hayat Tahrir al-Sham. Russia has repeatedly accused Turkey of violating a 2018 ceasefire by allowing such extremist groups to operate in Idlib.

“It’s a marriage of convenience, not an alliance,” said Dimitar Bechev, a research fellow at the Atlantic Council, of the Russia-Turkey relationship. “Whenever they co-operate, people tend to forget they have a lot of points of divergence. And the same thing now: whenever they fight, people forget their points of convergence.”

Mr. Bechev said that while Mr. Putin and Mr. Erdogan would probably both be happy to reach a “messy compromise,” it wasn’t yet clear that Mr. al-Assad and his allies in Iran would play along. “We don’t know what their preferences are, and they won’t be at the table.”

Neither will the United States – which last year drew down its forces in northeastern Syria at the request of Mr. Erdogan – or other Western governments.

James Jeffrey, the U.S. special envoy for Syria, said during a visit to the Turkish border Tuesday that the Trump administration was willing to provide ammunition and other supplies to the Turkish military. But Mr. Jeffrey said the U.S. was still “considering” a Turkish request for Patriot surface-to-air missile batteries that could be used to threaten Russian planes and create a no-fly zone over Idlib.

Recent days have seen chaotic scenes at Turkey’s frontiers with Greece, where tear gas has been used to repel refugees trying to breach the border fence. Videos posted on social media show Greek coast guard boats buzzing rafts crammed with refugees in an apparent attempt to capsize the smaller crafts.

“There has been a concerted effort to transport the refugees there [to the Greek and Bulgarian borders]. They didn’t suddenly appear out of the blue,” Mr. Ulgen said. “The message is that Turkey will no longer accept the European position that this is Turkey’s problem.” 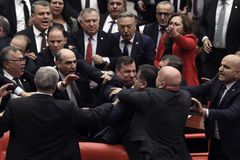 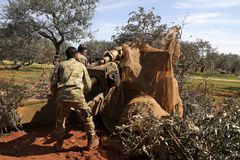 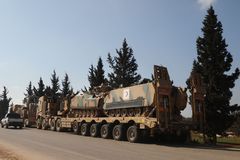