Members of the Canada-China business establishment in Beijing applauded a senior Chinese official who demanded the release of Huawei executive Meng Wanzhou and held Ottawa solely responsible for problems between the two countries.

Loud clapping rang out in a ballroom at the Four Seasons hotel in the Chinese capital on Tuesday when vice-minister of commerce Wang Shouwen called for Ms. Meng to “come back to her homeland as soon as possible.” He was speaking at a dinner for the Canada-China Business Council annual general meeting.

The room remained quiet when the Canadian government asked for equal treatment. Silence followed when Mary Ng, Minister of Small Business, Export Promotion and International Trade, called for the release of Canadians Michael Kovrig and Michael Spavor, who are being held in spartan Chinese detention centres, and requested clemency for Robert Schellenberg, a Canadian sentenced to death on drug charges. It was silent, too, when Canadian ambassador Dominic Barton called for the same.

Nearly two years after the arrest of Ms. Meng in the Vancouver airport at the request of U.S. authorities, a gulf is widening between Canadians who want little to do with Beijing and those with financial interests in China who see acquiescence to Beijing’s demands as the simplest way out of the impasse.

“That this issue has been dragging is frustrating,” said Olivier Desmarais, the scion of one of Canada’s most influential corporate families who is senior vice-president of Power Corp. and chairs the business council.

Members of the group “very much want to see these legal cases resolved,” Mr. Desmarais said in a videotaped address to the dinner on Tuesday night, in a reference to Ms. Meng and the two Canadians.

The scallop and strip-loin dinner sponsored by Huawei Technologies Co. Ltd. and several Canadian firms was the closest the two countries came to a commemorative event on Tuesday for the 50th anniversary of diplomatic relations. Leaders in Ottawa and Beijing did not have a phone call to mark the date, which in the past has been feted as a moment Canada helped spark broad Western recognition of Communist-run China. This year, it comes amid an intractable dispute.

Montreal-headquartered Power Corp. has long held a position of unique influence between the two countries, and Mr. Desmarais’s comments express a sentiment that has grown among a business establishment that sees China as a place of long-term growth and an immediate salve to the pain of the pandemic. While Canada’s worldwide exports fell 16.7 per cent in the first seven months of the year, they were up 2.2 per cent to China.

“The Chinese market is incredibly important to Canadian jobs,” with salaries that “depend on a strong continued relationship,” Mr. Desmarais said.

A recent Pew Research Center survey showed that Canadian public opinion toward China has plunged to levels never before recorded, with 73 per cent now holding unfavourable views of the country.

Foreign Affairs Minister François-Philippe Champagne, too, has adopted a more skeptical posture to China, saying that much of the agenda between the two countries, including talks toward a free-trade agreement, has been placed on hold or halted.

Canadian businesses, however, continue to press for greater ties – and the Chinese government is renewing its push for a trade deal. A “free-trade agreement is in line with our interests,” Mr. Wang, the vice-minister, said on Tuesday, adding that liberalized trade could expand flows of capital and talent and “bring more dividends to people on both sides.”

“Business is incredible,” he said.

Huawei increased its research and development spending in Canada by 30 per cent this year. Huawei has kept “our commitment to the country,” said Yan Lida, a board member of the Chinese technology giant.

“There’s a lot of noise out there, a lot of ripples on the surface, a lot of posturing,” said Bob Kwauk, an emeritus partner with Blake Cassels Graydon LLP, who led the firm’s Beijing office. “But business, trade will get done.”

Mr. Barton noted that China’s retail sales market is now nearly equal in size to that of the United States.

“China is here to stay. It’s going to be and is already a superpower in what they’re doing, and we have to figure out how to work together over the next 50 years,” he said. Ottawa has made a priority of “getting our relationship right,” he said, and wants “to deepen our understanding of China. Deepen our China capabilities, with the ambition of having the best China desk in the G7.”

Mr. Desmarais pointed to ways China and Canada can meet each others' needs in innovation, health care and environmental technologies.

“Honestly, we could do so much together,” he said.

Trudeau vows to stand up to China’s ‘coercive diplomacy’
October 13, 2020 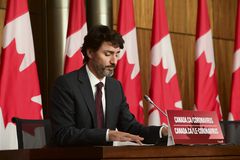 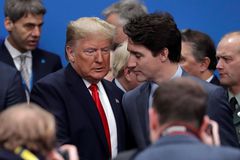