Canada has reduced its funding of Syria’s famed White Helmets rescue group, cutting even the $70 a month in stipends to 43 people who were left behind in a Jordanian refugee camp following a Canadian-led evacuation in the summer of 2018.

Canada has long been seen as one of the staunchest backers of the White Helmets, a group of civilians who earned global prominence by racing towards the front lines of Syria’s horrific civil war to try and rescue as many people as possible. The White Helmets have been credited with saving tens of thousands of lives, and the Canadian government has repeatedly boasted of the millions of dollars in annual aid it had provided to the Nobel Peace Prize-nominated group.

But Farouq Habib, deputy general manager of the White Helmets, told The Globe and Mail that Canadian funding of the organization – including specific funding for clearing mines and other unexploded ordnance, as well as money targeted at bringing more women into the organization – stopped at the end of 2019. Documents obtained by The Globe through an Access To Information request show Canadian support to the White Helmets was worth about $4-million per year, with final payments of just under $900,000 being made in March, 2020.

Mr. Habib said officials at Global Affairs Canada had suggested the funding might be resumed once a broad review of Middle East policy was completed – but he bemoaned a lack of urgency on the file, pointing out that meanwhile deaths from the war in Syria continue. Mr. Habib said that while other donor governments – the U.S., Britain, Germany, France and Denmark – were continuing their support, the White Helmets were having to curb some of their programs because of the cut in Canadian aid.

“We are the only actors on the ground working to clear mines and other unexploded ordinance. This is very important for the civilians,” Mr. Habib said in a telephone interview. “They [Canada] say politically that they are friends and supporters of the White Helmets – but they need to take things more seriously.”

Canadian funding of the White Helmets ended shortly after the death of the group’s British co-founder, James Le Mesurier, who committed suicide in November, 2019. Earlier that year, Dutch authorities had launched a fraud investigation into Mr. Le Mesurier’s non-governmental organization, Mayday Rescue – which received Canadian funds and then passed the money on to the White Helmets, the documents obtained by The Globe show.

The accounting questions surrounded US$40,000 in cash that Mr. Le Mesurier withdrew from his organization’s safe to cover expenses related to the 2018 rescue, which saw 422 people – White Helmets and their family members – evacuated from southern Syria just before the rebel-held area was recaptured by forces loyal to President Bashar al-Assad’s regime. Mr. Le Mesurier came back without receipts to cover some of his spending, leading to questions arising about Mayday.

Sources with direct knowledge of the situation say that while other donor governments found ways to continue supporting the White Helmets without involving Mayday, officials at Global Affairs Canada have pulled away from the file. Global Affairs did not respond to emailed questions by press time.

The last trickle of Canadian funding to the White Helmets was an emergency stipend of $70 per person per month to the eight White Helmets members and their families – 43 people in all – who have been stuck in Jordan’s desolate Azraq refugee camp since the 2018 evacuation. But those payments, worth a total of $3,010 per month, ended in November, 2020.

Canada was lauded on the world stage for organizing the rescue operation – which saw the White Helmets evacuated to Jordan via the Israeli-controlled Golan Heights – and e-mails from that time, previously reported in The Globe, show Canadian officials promised that any White Helmets members who reached Jordan would swiftly be resettled to Canada.

The eight families were left behind after their resettlement was blocked for reasons that have never been made public. After their plight was reported in The Globe, Canada started paying the monthly stipend – a crucial lifeline to the families, who are staying in a special high-security zone of Azraq.

It’s a measure that was originally intended to protect the White Helmets from any Assad regime sympathizers who might be inside the camp, but it’s one that has also prevented them from leaving the camp to find jobs in Jordan like other refugees can. One of the White Helmets in Azraq said the end of the stipends has made life even more difficult for the families – especially during the holy month of Ramadan, when many Muslims fast from sunrise to sunset.

“We are spending very difficult times,” said the White Helmets member, whom The Globe is not naming out of concern they could face retribution from Jordanian authorities. “The temperature reaches 45 degrees during the day, and there is no electricity.”

Mr. Habib said it was “shameful” that the eight families had been abandoned in such conditions. “Everybody failed them.”

The end of Canadian aid has also affected female members of the White Helmets, many of whom were recruited under a special Canadian program that helped bolster the number of women from about 2 per cent to 10 per cent of the organization’s staff. Documents show that in 2017 and 2018, Canada paid a salary of $150 a month to some 216 female volunteers, and spent another $650,000 to fund women’s centres in what are described as “besieged areas” of Syria.

Mr. Habib said the women’s centres and female staff were valued by women and families inside Syria, especially by women who preferred to receive medical treatment from another woman. He said the aid cut had reversed the progress that he credited to former foreign minister Chrystia Freeland, now Deputy Prime Minister, and Robin Wettlaufer, Canada’s former special representative to Syria, who is now based in the Palestinian Territories.

“We suspended the plan, which Canada supported in the beginning, to empower more women in the White Helmets and provide health care to more women and children in Syria,” Mr. Habib said.

“White Helmets women felt failed – they felt they were supported by Canada when Freeland was minister and Robin was the special representative. After they left to new positions, they left a big space which has not been covered yet.”

Editor’s note: While Canada has ended its funding of mine clearance and women’s centre programs run by Syria’s White Helmets in 2019, Canada has ongoing funding to the group in the form of a $1.6-million grant to supply PPE to Syrian health workers dealing with the pandemic. Incomplete information appeared in the original version of this article.

The sting: How a Canadian is fighting back in Syria’s high-stakes disinformation war
Subscriber content
April 3, 2021 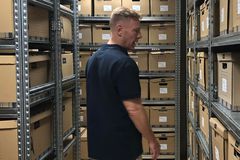 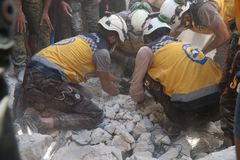 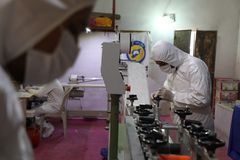 Follow Mark MacKinnon and Colin Freeze on Twitter @markmackinnon @colinfreeze
Report an error Editorial code of conduct
Due to technical reasons, we have temporarily removed commenting from our articles. We hope to have this fixed soon. Thank you for your patience. If you are looking to give feedback on our new site, please send it along to feedback@globeandmail.com. If you want to write a letter to the editor, please forward to letters@globeandmail.com.
Comments