Canada’s Foreign Minister was bound for London for private talks with a trusted ally after butting heads with leading figures from Lebanon and China, capping a bubble-bursting, four-country tour amid an unprecedented global pandemic.

Foreign Affairs Minister François-Philippe Champagne met face to face Thursday with Lebanese President Michel Aoun in Beirut, exhorting him to bend to the will of his country’s “street” and heed their calls for reform.

A day earlier in Rome, Mr. Champagne crossed paths, unexpectedly, with his Chinese counterpart, the hard-nosed Wang Yi, and told him in no uncertain terms that Canada has the world’s liberal democracies on its side as he ratcheted up his push for the release of Michael Kovrig and Michael Spavor.

“I was very clear that coercive diplomacy is not going to lead to the desired outcome,” Mr. Champagne said in a conference call from Lebanon on Thursday, where he had the first chance to rebut a Chinese ministry spokesman dismissing his latest advocacy for “the two Michaels.”

“He [Wang] is well-aware that the international community is seized of that issue. This is not just two Canadians being detained arbitrarily. Those are two citizens of liberal democracy, and every liberal democracy in the world should be concerned.”

Mr. Champagne said his meeting with Mr. Wang – a “robust” 90-minute talk that focused on the “two Michaels” and human-rights concerns – was brokered by the Italian foreign ministry after he discovered they were in the same city.

Mr. Kovrig and Mr. Spavor have been imprisoned in China since December, 2018, in what is widely seen as retaliation for Canada’s arrest of Huawei executive Meng Wanzhou on an American extradition warrant.

Mr. Champagne pushed Mr. Wang to allow Canadian diplomats to visit Mr. Kovrig and Mr. Spavor, access that has been denied since early this year. China says it can’t allow access to their prisons during the COVID-19 pandemic.

“I reminded him that Canada will always insist of having consular access to both Michael Kovrig and Michael Spavor, and that we expect them to respect the spirit and the letter of the Vienna Convention,” Mr. Champagne said, referring to the international agreement on consular access.

While winning the release of Mr. Kovrig and Mr. Spavor remains Mr. Champagne’s top priority, the Aug. 4 explosion in Beirut, which exacerbated a simmering political crisis in Lebanon, is also galvanizing the minister for a very real domestic political reason – the 200,000-strong Lebanese community in Canada has also been loudly calling for change in their homeland.

The Aoun meeting was the centrepiece of a four-country trip this week that saw Mr. Champagne shed his COVID-19 cocoon of video diplomacy and join the likes of Mr. Wang and U.S. Secretary of State Mike Pompeo in taking to the world’s skies. He flew on commercial airlines and will have to quarantine for 14 days when he returns to Canada.

Prior to arriving in Lebanon, he visited Switzerland and Italy, where he also met a series of politicians and host of representatives from international agencies.

Mr. Champagne appeared grim faced in a tweeted photo of his meeting with Mr. Aoun, in which he affirmed Canada’s solidarity with the people of Lebanon who have been demanding change since the explosion that killed 200 people, injured 6,000 and flattened districts of Beirut.

“My key messages to President Aoun today was: There cannot be aid without real reforms. That impunity must cease. That youth, young women, the street has spoken. And that the way forward is clear now,” Mr. Champagne said.

Lebanese people have taken to the streets demanding an independent investigation into the explosion and to protest widespread corruption in their country. Champagne also met with victims, rank-and-file Lebanese, first responders and international agencies trying to help the country.

“I thought there was something symbolic to be one of the first foreign ministers to come here and to show support and to listen to the people,” he said.

“And to speak loud and clear to the authorities as to what we see is needed to ensure a more inclusive and better future for Lebanon.”

Champagne posted a video on Twitter from the burned-out hulk of the city’s decimated port after his meeting with Aoun.

“You can smell destruction. You can feel destruction, you can see also the resilience of the Lebanese people,” the minister said, against a vast backdrop of brown and grey ruin.

“We have said we will be there for Lebanon and I can assure you what you’re seeing is only part of the destruction. You cannot even see with your own eyes the size of that destruction.”

Mr. Champagne’s trip will end in London where he will meet in person with British Foreign Secretary Dominic Raab.

The two will talk behind closed doors – face to face and without the long-distance digital link that already brings them together at least once a week.

China, as well as the instability in Hong Kong, Belarus and Mali, along with his first-hand account of Lebanon, and descriptions of his meetings with various figures were all going to feature in his discussion with Mr. Raab, said Mr. Champagne.

He said the talks would be part of his efforts to “broaden an alliance of liberal democracies” to confront various global crises.

“I’m sure we could spend a day,” Mr. Champagne quipped. “With Secretary Raab, we have one of the closest relationships I have built between a foreign minister, and I think it’s serving Canadian interests very well.” 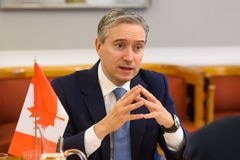 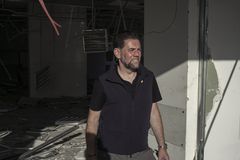 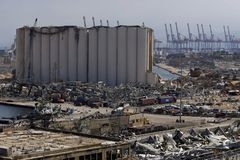