The federal government is holding up Canada’s experience with residential schools as a warning to China over its mass detention of Muslims – a subject raised by Prime Minister Justin Trudeau with China’s Premier this week.

Over the past two years, Chinese authorities have placed large numbers of people, many of them ethnic Uyghurs living in the country’s western Xinjiang region, into centres for political indoctrination and skills training as part of a campaign against “anti-extremism.”

But “if you forcibly put people into schools or re-education camps, to forcibly teach them to disavow their own traditions, or religions, or pasts or beliefs and adopt new ones – it doesn’t always work out well,” John McCallum, Canada’s ambassador to China, said in an interview Thursday.

Canada’s historic use of residential schools has “parallels” with the “current situation with Uyghurs in China,” Mr. McCallum said.

Those responsible for the establishment of residential schools may have thought they were pursuing the betterment of the country, or of Indigenous peoples themselves, Mr. McCallum said. “But it turned out it was not good at all. And it left a very bitter legacy that is with us to this day.”

In raising the issue with China, Canada has sought to “acknowledge our own troubles,” Mr. McCallum said, and “point out that those episodes in Canadian history could have lessons for China today.”

China has said it is offering free vocational training and legal education to people at risk of radicalization in Xinjiang, and lashed out at critics.

“If we can take care of prevention, then it will be impossible for terrorism to spread and take root,” China’s Foreign Minister Wang Yi said this week. He called the efforts “completely in line with the direction the international community has taken to combat terrorism,” and said people “should not listen to gossip or rumour, because the Xinjiang regional government, of course, understands the situation in Xinjiang best, and not some other people or organizations.”

But Western nations, including Canada, have become increasingly vocal in decrying Chinese policies in Xinjiang. Both Mr. Trudeau and Foreign Minister Chrystia Freeland have expressed concern with their Chinese counterparts. Mr. Trudeau met this week with Chinese Premier Li Keqiang in Singapore and had a “fairly in-depth conversation on this topic,” Mr. McCallum said.

The fact that some Uyghurs have committed acts of terror in China “doesn’t mean that every Uyghur is an extremist,” he said. “And so I think the way you deal with that is in ways other than what the Chinese are currently doing.”

Western scholars estimate that hundreds of thousands of people, and perhaps more than a million, have been placed in the centres. Chinese state media has said those inside learn useful employment skills, and participate in cultural activities such as dancing.

Former detainees have told The Globe and Mail they spent hours being drilled in the Chinese language, in addition to reciting allegiance to the Communist Party and President Xi Jinping. People as old as 87 have been detained. Some have died, with families blaming poor conditions.

In the U.S., members of Congress have called for the Trump administration to target Chen Quanguo, the region’s top leader, under the Global Magnitsky Act. That legislation allows for individual sanctions against people involved in serious human-rights abuse or corruption.

Canada helped to co-ordinate a joint diplomatic letter sent this month requesting a meeting with Mr. Chen, who is widely seen as the driving force behind Xinjiang’s “anti-extremism” campaign.

The letter was signed by 15 ambassadors who said they are “deeply troubled by reports of the treatment of ethnic minorities, in particular individuals of Uyghur ethnicity,” according to Reuters, which saw a draft copy of the letter sent on Nov. 2. The letter’s existence was confirmed to The Globe by multiple diplomatic sources.

“In order to better understand the situation, we request a meeting with you at your earliest convenience to discuss these concerns,” the letter reads.

Hua Chunying, a spokeswoman for China’s Foreign Ministry, on Thursday called the letter “rude” and “unacceptable.” She responded by raising the treatment of minority people in the U.S. and Canada. If they “learn English, shouldn’t it be seen as an attempt by those governments to eradicate or assimilate the language and culture of minority groups?” she asked.

Ambassadors, she added, should not “gossip, making unreasonable demands of the country they are stationed in and doing things that interfere in that country’s internal affairs.”

“China doesn’t care too much about being criticized about its human rights record – but it doesn’t want to be an outlier in the international community either," he said, “and the Xinjiang mass internment campaign has just landed China there.” 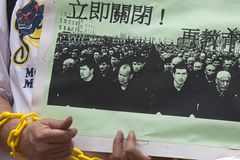 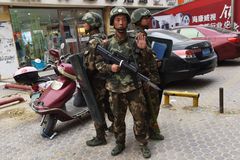 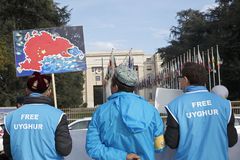