A Chinese court has sentenced a Falun Gong practitioner who held a Canadian passport to eight years in prison for belonging to a spiritual movement that Beijing calls a “cult.”

Sun Qian also renounced her Canadian citizenship in the process – a move her supporters say she made under duress and torture.

“I believe she should still be regarded by us as a Canadian citizen,” former Liberal justice minister Irwin Cotler said. Mr. Cotler, who has worked on Ms. Sun’s case, accused the Chinese of securing a false confession from her.

“If someone is tortured into making a false confession, that doesn’t mean we have to acquiesce and accept it.”

China’s legal system made its decision just weeks after a British Columbia judge ruled against Huawei executive Meng Wanzhou, who was arrested at Vancouver International Airport in late 2018 on a U.S. extradition request. Ms. Sun’s supporters say they believe the ruling Tuesday is linked to the Meng case.

Meng Wanzhou lost her B.C. ruling on extradition. What now?

Ms. Sun, a Chinese-born woman who immigrated to Canada in the mid-2000s, pleaded guilty to organizing or exploiting cults to undermine the implementation of law, a charge commonly used against believers in Falun Gong, a spiritualist tradition Chinese authorities see as a threat to its rule and have banned.

Ms. Sun was sentenced nearly 3½ years after her arrest. Barred from using her own legal counsel in court, she appeared with a court-designated lawyer and “voluntarily abandoned her Canadian citizenship and waived her right to appeal,” according to Xie Yanyi, a Chinese human-rights defender who has followed her case.

Ms. Sun told a lawyer she was mentally tortured in prison and pepper-sprayed while restrained. At a trial in September, 2018, she said she had done nothing illegal and described mistreatment while in detention.

Two months later, she wrote a note saying she was in the process of pleading guilty and no longer wanted to meet with her lawyer.

He said she was threatened, intimidated, deceived and deprived of freedom, adding her decisions to confess, take a court-appointed lawyer, waive an appeal and give up her Canadian citizenship don’t add up. “All these are against common sense and are merely the results of her being deprived of free will,” Mr. Xie said.

“Canada continues to closely monitor the case of Ms. Sun and Canadian officials are providing consular assistance to her and her family,” said Krystyna Dodds, a spokesperson for Global Affairs. “Consular officials attended the June 30 verdict pronouncement. We have raised her case directly with Chinese counterparts in keeping with our commitment to promoting and protecting human rights and engaging on consular cases in China.”

Ms. Sun began practising Falun Gong in 2014 and credited it for alleviating health problems. Once a billionaire joint owner of a biochemistry company with her husband, her family has said it suspects she was arrested in early 2017 as a ploy to seize her assets.

But her sentencing Tuesday “is directly related to Meng Wanzhou’s case,” Mr. Xie says. He pointed to the “growing contradictions between China and Canada” and to the timing of the sentencing, little more than a month after the B.C. Supreme Court ruled against Ms. Meng, who has sought to end the extradition proceedings against her.

The daughter of Huawei founder Ren Zhengfei, Ms. Meng is accused by U.S. prosecutors of fraud related to violations of sanctions against Iran. She says she has done nothing wrong.

Li Xun, president of the Falun Dafa Association of Canada, decried China’s treatment of Ms. Sun and called on the Canadian government to demand her release.

“We condemn the illegal imprisonment and sentencing of Ms. Sun by the Chinese Communist regime. Ms. Sun is innocent [and] should have never been arrested in the first place,” Mr. Li said.

“The persecution of Falun Gong violates the UN Charter and other international human rights conventions. It also violates China’s own constitution and laws.”

Mr. Li said Ms. Sun “has suffered at the hands of the evil Communist Party for over three years,” and recounted her mistreatment. “She has been illegally detained and physically and mentally tortured with reports of her being shackled, handcuffed to a steel chair, pepper-sprayed in the face and under sustained brainwashing and psychological manipulation.”

Ms. Meng was arrested at Vancouver International Airport in December, 2018, on a U.S. extradition request. China has vociferously opposed her detention and has accused Canada of being an accomplice to a U.S. scheme to “deliberately oppress Chinese high-tech companies.”

The Huawei executive is currently on bail in Vancouver fighting the U.S. extradition request. She is accused of bank fraud in connection with the violation of U.S. sanctions against Iran. In late May, a B.C. judge rejected Ms. Meng’s first bid to strike down the extradition case against her. 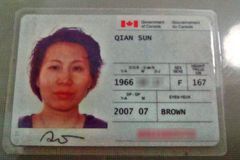 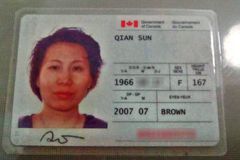