Prosecutors provided enough evidence to move toward trial for five Michigan men accused of plotting to kidnap the state’s governor because of her measures to control spread of the coronavirus and they will all remain held without bond, a federal judge ruled Friday.

A two-day preliminary hearing in Grand Rapids this week featured testimony by one of the FBI agents who ran the investigation, relying on confidential informants and undercover agents to thwart the purported scheme to abduct Democratic Gov. Gretchen Whitmer.

U.S. Magistrate Judge Sally Berens said the five men’s cases can go to a grand jury, which will determine whether to issue indictments. That is required for them to face trial.

Berens also ruled following a Friday bond hearing that Ty Garbin will remain in custody along with Adam Fox, who waived his right to a hearing. Berens on Tuesday denied bond for the three other Michigan residents charged in the case: Kaleb Franks, Daniel Harris and Brandon Caserta.

A sixth man, Barry Croft, was separately ordered on Tuesday to be transferred to Michigan from his home state of Delaware.

Authorities allege members of two anti-government paramilitary groups took part in plotting the kidnapping of Whitmer. Six men, led by Fox of the “Michigan III per centres,” are charged in federal court. Eight others are believed to be members or associates of a group called the Wolverine Watchmen and are charged in state court with counts including providing material support for terrorist acts.

Fox and Croft were among those who attended that session, according to testimony and court documents. But it was not clear if talk of targeting Northam went beyond that meeting, and nothing from the complaint or Trask’s testimony indicated that anyone had been charged with a plot involving Northam.

The men could get up to life in prison if convicted.

Several of their defence attorneys implied during questioning that their clients were “big talkers” who did not intend to follow through with action.

“It’s loose talk,” Scott Graham, an attorney for Franks, said. “And again, the point is: What has been done to show you that there was an actual agreement?”

Assistant U.S. Attorney Nils Kessler, though, argued that the group demonstrated their discussions were serious by taking steps to keep them secret, including using encrypted chat tools. Authorities found conversations among group members in which they were worried that federal authorities had infiltrated their planning sessions, he said.

Some of them also participated in surveillance of Whitmer’s northern Michigan home, Kessler said, rejecting defence attorneys' implication that the men participated in paramilitary group exercises without a specific plan for using those techniques.

“You’re crossing a pretty serious line when you go in the middle of the night in multiple cars and stage up at a gas station and … you go to the house of the sitting governor of the state to go surveil their house at night,” Kessler said.

Berens agreed, saying prosecutors didn’t have to show the men “signed on a dotted line” at this stage of their case.

A preliminary hearing is sometimes described as a mini-trial but requires a lower standard of proof – probable cause – than a criminal trial. Berens found that the information presented showed the men had a unified purpose – to kidnap Whitmer – allowing the case to move forward.

“The fact that (the plan) was likely to be unsuccessful or difficult to accomplish” isn’t relevant, she said.

Douglas Parker, the attorney for Harris, said outside the courthouse that he disagreed with the judge’s decision.

“There were a bunch of questions that are still unknown by the hearing, and we’re going to have to see where the evidence goes,” Parker said. “All I’d say is: Keep an open mind.”

Whitmer, who is nearly halfway through a four-year term, has been widely praised for her response to the coronavirus but also criticized by some conservatives. The state capitol has been the site of many rallies, some with gun-toting protesters demanding her ouster.

Michigan – particularly the Detroit area – was hit hard early during the pandemic, leading Whitmer to restrict personal movement and the economy. Many of the limits have since been lifted.

Some of the Wolverine Watchmen are accused of planning and training for other violent crimes such as storming the Michigan Capitol building and attacking law enforcement officers. 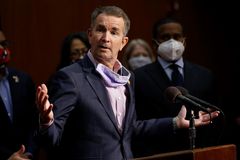 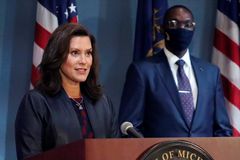 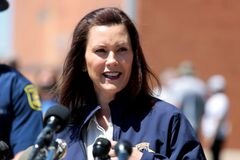