With the Summer Olympics fast approaching, the double gold-medalist Caster Semenya is facing a bizarre choice: she can compete in the 200-metre dash or the 5,000-metre long-distance event.

Those are the last options remaining to her today. The multiple world champion, who fought her way up from a small, impoverished South African village to reach global fame in the 800 metres, has been barred from her strongest track events – unless she takes chemicals to reduce her naturally elevated testosterone levels.

More than 11 years after the first gender-verification tests were imposed on her, Semenya has refused to surrender to the sport’s regulators. Her protracted legal battle against World Athletics, the international governing body, has now moved to the European Court of Human Rights, where she can pursue the rights issues that she sees at the heart of the dispute.

But with the growing likelihood that a ruling will not be issued before the Olympics begin in Tokyo in July, the 30-year-old runner is obliged to train for an event allowed by the new rules, even if it is far outside her middle-distance speciality.

“It just goes to show her bravery,” says Gregory Nott, one of the leaders of her legal team. “She’s an indomitable spirit. This is now her 11th year of having this hang over her head.”

Last year, Semenya was training for the 200-metre sprint. But earlier this month, South African sports officials suggested that she is more likely to compete in long-distance events.

“She has decided to go back to longer distances, above 3,000 metres,” Athletics South Africa president Aleck Skhosana told a parliamentary committee.

In an interview with The Globe and Mail, her lawyer would not confirm whether she has made a final decision. “She’s training,” Nott said. “There isn’t a day that goes by when she doesn’t run. It’s quite phenomenal.”

Semenya rarely grants interviews. But on her social media accounts last month, she said: “This fight is not just about me. It’s about taking a stand and fighting for dignity, equality and the human rights of women in sport. All we ask is to be able to run free, once and for all.”

World Athletics, for its part, has shown no sign of backing down, insisting its regulations are a “reasonable, necessary and proportionate” way to ensure fairness and equal rights for all female athletes.

Since winning her first world championship in 2009, athletics regulators and rival runners have demanded answers for Semenya’s extraordinary achievements. She was ordered to take medically unnecessary drugs to lower her testosterone, even though they made her constantly ill.

By 2018, the International Association of Athletics Federations (now known as World Athletics) believed it had found enough evidence to impose the new testosterone limits – but only in the 400 metres, 800 metres and 1500 metres, which were precisely the distances in which Semenya specialized.

She challenged the rules in the Court of Arbitration for Sport, based in Switzerland, which rejected her challenge in a split 2-1 ruling – even though it expressed reservations about the new rules. Her appeal to the Swiss Federal Supreme Court was rejected last year.

Last month, Nott and his legal team – including the Canadian lawyers James Bunting and Carlos Sayao – filed their latest appeal at the European court, backed up by thousands of pages of documents.

They are also trying to raise about US$1-million to cover costs. Her fate has always been decided by courts in expensive European cities, and the new case in Strasbourg is no exception. Her supporters are raising funds by selling T-shirts with her favourite sayings, such as, “Doors might be closed but not locked.”

Despite her court losses, Semenya has won support around the world. The World Medical Association said the new regulations are flagrantly discriminatory and contrary to medical ethics, forcing athletes to take potentially harmful medication. Physicians are ethically obliged to refuse to administer such treatments, the association said.

Human Rights Watch, in a report in December, said the regulations are “arbitrary, invasive and degrading” and “not based on accepted science.” They are “implemented in coercive environments where women are forced to choose between their careers and their basic human rights,” it said.

A new international movement, #LetHerRun, led by doctors, scientists and former athletes, is campaigning for the right for Semenya and other athletes to compete in the Olympics without restrictions. They argue that the latest regulations are just a new variation of the sex testing and “nude parades” that have been imposed on female athletes for many decades. Women are being told that they are “not woman enough,” it says.

Nott, who first volunteered to work for Semenya when she was ordered to take gender verification tests after her world victory in 2009, says her legal case is ultimately about human dignity.

“The issue, for me, has become bigger and bigger, more understandable and more defensible,” he said.

“It’s about a person saying, ‘I’m Caster, this is who I am.’ Caster tests all of our ordinary thinking. She’s very proud of who she is. She is a woman and won’t be challenged on that. That’s strength in itself.” 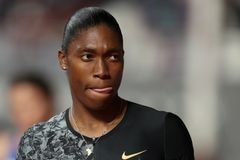 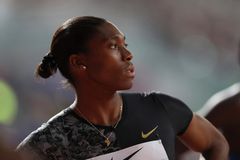 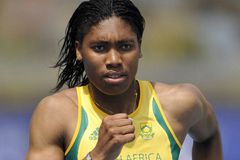