Chinese authorities blocked a Canadian woman from entering the country to visit her imprisoned dissident father on Wednesday, keeping her under close surveillance in the Hangzhou airport until they could escort her onto a flight to South Korea.

Ti-Anna Wang landed in China after she was granted a visa that she had spent nearly a decade waiting to secure. She wanted to see Wang Bingzhang, her aging father, a Chinese National who studied in Montreal in the late 1970s as a medical student before becoming an activist. An organizer of political opposition groups overseas, he was kidnapped in Vietnam in 2002 and smuggled to China, where he was sentenced to life in prison on espionage and terrorism charges.

Ms. Wang has not seen her father since 2008 because Chinese authorities have continually denied her a visa. However, she received authorization to visit the country last year.

But when she landed in Hangzhou on Wednesday, immigration authorities told her she could not come in. She was travelling with her husband and 11-month-old daughter, both of who can enter, Ms. Wang said in a telephone interview. “But I cannot. And we have to leave China immediately.”

Ms. Wang was eventually booked onto a flight to Jeju, in southern South Korea, that departed Wednesday evening.

Her inability to enter China came at a time of heightened tension between Beijing and Ottawa, which has raised concerns for Canadians travelling to the country.

Ms. Wang was given a visa to China in August, 2018, but the complexities of arranging family travel kept her from flying to the country until this week. It’s not clear why she was denied entry. Airport authorities said, “they don’t know the reason themselves. They said they have been ordered from above,” she said.

It’s not the first time she has received a visa only to be blocked at the airport. A similar sequence of events took place in 2009.

China has now held two Canadians, Michael Kovrig and Michael Spavor, for more than a month. Both men are accused of endangering China’s national security, but their detention has been widely seen as reprisal for the arrest in Vancouver of Meng Wanzhou, the chief financial officer of Huawei, whose father is the tech giant’s founder. The United States has sought the extradition of Ms. Meng, whom it accuses of fraud related to violation of sanctions against Iran.

Canada has led an international campaign to demand the release of Mr. Kovrig, a former diplomat who is an analyst with International Crisis Group, and Mr. Spavor, who helped to bring tourists, investors and athletes to North Korea.

Mr. Wang, the jailed dissident, is not a Canadian citizen, although his daughter is. Ms. Wang has been the face of a multinational effort to press China for her father’s release. He has been imprisoned, his family believes, because he was organizing a Chinese political opposition movement.

But Ms. Wang worries that the government of Canada’s attempts to secure the release of Mr. Kovrig and Mr. Spavor will divert attention from her father’s plight.

“It’s really difficult in this situation, because I feel like, with the detention of Canadians – as upsetting and distressing and unjust as that is – the reality of what it means for my father is that his case is just going to fall lower on the priority list,” she said.

The United Nations Working Group on Arbitrary Detention has called Mr. Wang’s imprisonment a contravention of the Universal Declaration of Human Rights, noting that China has never produced any evidence of him urging others to commit violence.

Ms. Wang’s half-sister visited him in late December, and told him Ms. Wang would be coming for a visit, since she had secured a visa.

“This was supposed to be a very meaningful trip for all of us,” Ms. Wang said. “I didn’t want to be too hopeful. But I think deep down, I really thought I was going to see my father. … He’s not doing too well in terms of his mental health. And we were also hoping that I could bring my daughter into the visitation room.”

Instead, she spent Wednesday in a room at the Hangzhou airport. Agents followed her and her husband as he walked with her daughter.

The Canadian government has “been in contact with Ti-Anna Wang, and have been providing her with consular assistance,” Global Affairs Canada spokesman Guillaume Bérubé said.

“Our former parliamentary secretary has met with Wang Bingzhang’s family to discuss his case, and we remain in contact with the family.”

But, he said, “every country or territory decides who can enter or exit through its borders.” 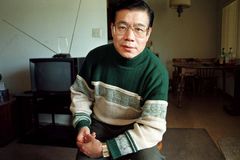