Hong Kong maintains the trappings of democracy. It has legislators and councillors, scheduled elections, political parties and legal assurances that its people will be granted universal suffrage to choose their leader.

But the arrest of dozens of legislators, pro-democracy politicians and scholars on Wednesday – a “political guillotine” that marked the single-biggest enforcement action since the imposition of a national-security law last year – brought into stark relief the enormity of Beijing’s changes to the political rights of Hong Kong residents, including hundreds of thousands with Canadian passports.

Its residents may still be allowed to vote in the future, but “elections do not equal democracy,” said Ivan Choy, a scholar and political commentator at the Chinese University of Hong Kong. The prospect of a democratic Hong Kong, an island that has long cherished rights and freedoms not available in mainland China, has now been snuffed out, he said. From now on, elections will only take place when Beijing “can guarantee they can control more than half of the seats.”

Over the past six months, Beijing has used the provisions of the national security law to curb free speech, sweep protesters off the streets, silence activists and take into custody some of its most prominent critics in the city, including publisher Jimmy Lai.

On Wednesday, the law was used to arrest 53 people, including prominent lawmakers, a high-profile academic activist and a respected pollster who had been involved in organizing a primary election last July for pro-democracy candidates, which drew 610,000 voters. Six people were accused of subverting state power by organizing the primary ballots, the others arrested for their participation. Attorney John Clancy, a U.S. citizen who has worked with a party that helped organize the election, was also arrested.

The mass arrest of activists & politicians in #HongKong is a grave repression of political pluralism. It demonstrates a total disregard for Hong Kong's Basic Law & further erosion of the « One country two systems ». We call for their immediate release. https://t.co/sE1loMZAyc

Secretary for Security John Lee described the primary election as an attempt to overthrow the government by parties seeking to secure enough seats to “veto the government budget regardless of the actual content,” thereby creating “a situation in which the chief executive had to resign and the government stopped functioning. This was to paralyze the government.”

The Hong Kong Liaison Office, Beijing’s representation in the city, praised the police sweep, saying in a statement that it supports “the separation of those suspected lawbreakers who breached the law by strategically organizing or paralyzing the government away from the general public, who were actually misled to vote in the so-called ‘primary elections.’”

The office took specific aim at scholar Benny Tai, who had formalized a “35-plus” strategy to take a majority of the 70 seats in the city’s Legislative Council, accusing him of “sinister intentions” and posing a danger to Hong Kong society.

The statement left little doubt that the normal aim of a democratic election – a peaceful contest to determine who can govern – has no place in Hong Kong, where the government is defined as those who serve at Beijing’s pleasure.

“Clearly, what they’ve done today to the pan-democrats is a real political guillotine. They are beheading the major opposition parties,” said Jean-Pierre Cabestan, a political scientist at Hong Kong Baptist University who studies Chinese governance.

Police also ordered three media outlets – Apple Daily, Stand News and In-Media – to produce “documents in connection with national security cases” in a week. Each of those outlets had links to the primary election, either by organizing a forum or accepting related advertisements.

Those arrested are widely expected to be disqualified from running in elections for the Legislative Council, which are scheduled for September after being delayed a year.

“They’re disqualifying democracy, is what they’re doing,” said Mark Simon, the top aide to Mr. Lai, the founder of Apple Daily. “If you can’t select your candidates, if candidates can’t campaign, it’s not a democracy.”

In mainland China, however, scholars accused democracy advocates in Hong Kong of misunderstanding their rights and their role under the “one country, two systems” formulation that Beijing uses to govern the city.

“They think that under one country, two systems the two systems are parallel, like well water and river water,” said Tian Feilong, a law professor at Beihang University who specializes in Hong Kong law.

But any political rights in the city cannot be independent of mainland China’s legal system or Beijing’s control, Prof. Tian said. The national security law, which places the city under Beijing’s definition of subversion, secession and foreign interference, amounts to “a restatement of the legal boundaries of democratic politics in Hong Kong.

“The filibustering, fierce criticism of [Communist] Party leadership and even opposition to the socialist system … which used to be common in Hong Kong society may now be perceived as illegal,” he said.

“Hong Kong citizens still have the freedom of political expression protected by the Basic Law,” he added, referring to the city’s mini-constitution. But “the exercise of their rights must be lawful and within the bounds of legal requirements.”

Beijing’s commitment to keep Hong Kong distinct is primarily intended to maintain its corporate and trading vitality, Prof. Tian said. “It is in China’s national interest to maintain Hong Kong’s status as a free economy and global financial centre.”

The city continues to enjoy freedoms of speech, association and academic inquiry not available in mainland China, although those have been circumscribed. Hong Kong’s courts have also maintained their independence, although the city’s judiciary has come under pressure from Beijing to show more deference to Chinese dictates.

“Even running for a seat in a civilized, government-run election can be considered a subversive act,” said Avery Ng, a pro-democracy activist who was among 15 people arrested last year as what Chinese state media called “riot leaders.”

“In short,” he said, “they will only allow representation of a single official view only.” 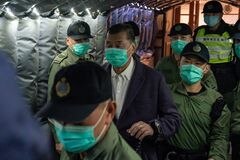