If the Chinese capital is back to business in the midst of the global coronavirus epidemic, it is a strange kind of normal – one that presages the discomfort likely to accompany attempts elsewhere, including in Canada, to restart everyday life while minimizing the chances of a new outbreak.

It’s an approach that, in China, relies on a raft of surveillance, regulatory and enforcement measures: cellphone tracking, computerized decision-making, a thicket of rules, police monitoring by social media, and an army of volunteers in red armbands, stationed at apartment compounds and alleyway entrances across the city screening each person entering and leaving.

Though China’s severe initial virus response was criticized as the unpalatable conduct of an authoritarian state, countries around the world adopted some of its harshest measures, including sweeping lockdowns.

And governments may once again look to what China is doing in the postlockdown period, after the country on Monday said no confirmed or suspected COVID-19 cases remain in Hubei province, where the outbreak first spread.

States around the world are employing a raft of approaches to hold the deadly virus at bay while resuming daily activities.

What each holds in common is a prevention-and-control regime that, while looser than a lockdown, continues to alter the daily lives of large numbers of people – perhaps for a long time to come. “Some experts predict COVID-19 will stay for as long as two years, and we have to accept the reality that we can’t go back to pre-COVID-19 life during that time,” Kim Gang-lip, South Korea’s Vice-Health Minister, said last week.

”If you don’t compromise, things are going to get worse,” said Ivan Hung, chief of the infectious diseases division at the University of Hong Kong. Without maintaining some restrictive measures, the virus “is not going to stop, and people are going to die.” That means ”you can’t go 100-per-cent back to normal," he said. "But at least you can have 50 per cent, which will allow you to resume, to a certain extent, your business.”

What that’s meant is baseball games without spectators in Taiwan; government-backed coronavirus apps in Singapore and Australia that use Bluetooth technology to track people who come in close contact; a ban on gatherings of more than four people in Hong Kong; a detailed code of conduct in South Korea that calls for people to work from home, keep restaurant stays brief and book seats in empty rows on public transit.

Perhaps nowhere is the advent of a strange normal as visible as in China.

Offices in Beijing cannot allow more employees into work than can be accommodated while respecting distancing requirements. Retail shops must bleach before opening and regularly disinfect fitting rooms and sales terminals, while keeping in stock sufficient sanitizing liquid, gloves and masks for their employees. Schools, which on Monday reopened only to Grade 12 students in Beijing, must maintain limits on their numbers in classrooms and adhere to strict disinfection schedules.

Many restaurants and bars record identification and phone numbers of those entering, after verifying a readout from an app that they are clear to leave their homes. In the Sanlitun entertainment district, eateries have been ordered to join a large group on the messaging app WeChat and to post hourly photos of their interiors, which police scrutinize for compliance to seating limits.

The Chinese approach is more invasive and wide-reaching than that employed by most other countries – and has won plaudits for its scale and its rigour. “It’s very good policy,” said Chang-Chuan Chan, dean of the College of Public Health at National Taiwan University. “You have to have very strict and clear guidelines, and also have systems to check that people actually follow the rules.”

Not everything that China does will work in democratic systems, said Prof. Chan, who has previously criticized the unreliability of information from Beijing. Any country, however, will “want to increase social distancing as much as possible,” even when emerging from lockdown, he said. It’s also important to be clear that easing restrictions might not be permanent: Strict measures need to be reinstated quickly in the event of a new outbreak. “So you have to tell citizens it will be an on-and-off sort of thing.”

China has sought to maintain vigilance by keeping people in red armbands at the outdoor desks and makeshift blockades that have sealed off large parts of the city – including its famous hutong alleyway districts. The restrictions have frustrated the normal flow of people and goods through Beijing, giving the city an air of martial law.

Behind the barricades are retired cadres such as 70-year-old Communist Party member Li Jun, who screens each person entering and leaving Beijing’s Songyu Xili community, conducting what Ms. Li calls “countless” temperature and document checks. Only residents are allowed in, a restriction designed to “keep possible threats out of the area,” she said.

“These check procedures are very necessary and effective,” she added.

They are also a reflection of the immense effort the country is expending to prevent a second wave of the virus, much of it through unpaid labour by aging cadres.

At Songyu Xili, some 70 to 80 volunteers work the only two gates to the community still open. At Caochang Santiao, Cao Hongli was one of 40 people working five-hour shifts Monday. “I want to help fight against the epidemic. I want to make my own contribution,” said Mr. Cao, who previously worked at Capital Iron and Steel Corporation, a major state-owned firm.

Some residents are annoyed at the community blockages. But fighting the virus “requires both sides, policy makers and the people, to co-operate,” he said. “It won’t work that well in other countries if people can’t do what’s necessary to make it work.”

In the Dajiang neighbourhood, meanwhile, a single blockade controls access to a 1.5-kilometre road that splinters off into numerous small residential alleyways. On Monday, it was guarded by Liu Jianjun, a Communist Party member who expressed pride in the order she helped to impose by maintaining community control.

By contrast, “the scenes overseas still look messy,” she said. “It seems like they don’t know what really matters.” 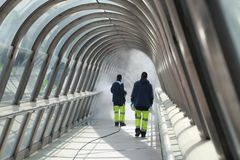 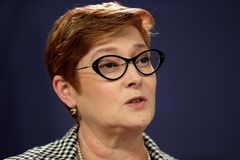 Flattery and foot dragging: China’s influence over the WHO under scrutiny
April 25, 2020 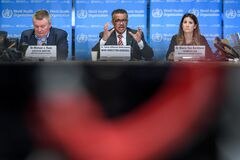