Authorities in China’s western Xinjiang region are peering deep into the lives of people there with an extensive surveillance system that categorizes people as suspicious according to 36 different criteria and can automatically prompt investigations by authorities based on a person’s conduct and relationships.

A smartphone app obtained and analyzed by a human-rights group offers a glimpse into the heart of an emerging system of digital authoritarianism in Xinjiang. It is a region where as many as a million people, primarily Muslim Uyghurs, have been placed into centres for forced political indoctrination and vocational training in the midst of an extended anti-extremism campaign.​

“The depth, breath and intrusiveness of the Chinese government’s mass surveillance on its citizens may be unprecedented in modern history,” Human Rights Watch writes in China’s Algorithms of Repression, a report released Wednesday.

”What’s happening in Xinjiang is basically a story of where humanity may be going," said Maya Wang, the China researcher who wrote the report. "It’s not just a story about Xinjiang, or just about China. It’s about whether or not human freedoms exist in a world of networked devices where authorities or companies have access to that data without privacy restraints.”

Human Rights Watch reverse-engineered an app used as a mobile portal to Xinjiang’s Integrated Joint Operations Platform, or IJOP, a central surveillance platform used by authorities in the region. The first version of the app was released in December, 2016.

Among the findings is a list of 36 types of people designated for special attention, including those considered unofficial imams; those who suddenly returned home after a lengthy absence; those who have given up smartphones in favour of analog phones; those deemed as not socializing with neighbours, failing to use a front door or acting suspiciously; those collecting money for mosques “with enthusiasm”; those whose houses use “abnormal” amounts of electricity; those who know how to weld or make explosives; those linked to people abroad or on the run; those who have moved; and those who “for no apparent reason, [are] unwilling to enjoy policies that benefit the people or fail to participate in activities organized by the local government or the [Communist] Party.”

Some of the criteria have specific security connections, such as people previously imprisoned for rioting. Chinese authorities have said they are striking hard at terrorism and extremism in Xinjiang, but in accordance with the law and while protecting human rights.

But “a lot of these criteria for indicating suspiciousness are quite frankly bogus,” said Ms. Wang of Human Rights Watch. The app “is incredible in basically automating” aspects of surveillance. “It’s telling them in minute ways, ’go and investigate this person.’”

Earlier this week, authorities in Kenya signed a $230-million agreement with Chinese tech giant Huawei for the construction of a data centre and smart cities project, which includes a “public safe city” component. The IJOP system was built by a subsidiary of China Electronics Technology Group Corp., a state-owned military contractor.

But the Kenya agreement “more than likely exports technology developed and used for surveillance in Xinjiang,” noted Adrian Zenz, a researcher at the European School of Culture and Theology who specializes in Xinjiang, on Twitter.

Information contained in the IJOP app suggests that authorities in Xinjiang can be dispatched to investigate when a person’s electricity usage fluctuates or when their phone, vehicle or national identification card has gone “off-grid.“

The system parses data from gas stations; parcel delivery services; cameras (some of them with facial recognition abilities); WiFi sniffers; personal relationship networks; residential entry systems and smartphones. It identifies 51 “suspicious” internet tools, including WhatsApp, Skype, iMessage and VPN software used to skirt what is known as China’s Great Firewall. And it silently compiles information at checkpoints from devices that log data from a person’s phone, such as its International Mobile Equipment Identity, or IMEI, number.

“The kinds of information the app is designed to collect suggest that the Chinese authorities are not simply looking for signs of terrorism, as their official statements claim, but trying to shut down any attempts by individuals to create some modicum of privacy for themselves, and to bring every action of every citizen under the scrutiny of the state,” said Rian Thum, a scholar who studies Xinjiang at Loyola University New Orleans.

Such surveillance is “particularly disturbing in a context where such vague designations of ‘suspiciousness’ are enough to get members of minority groups sent to internment camps without any legal charges or trial,” Mr. Thum said.

The systems in place seem designed to “deprive each individual of mental and physical autonomy,” said Rukiye Turdush, a Canadian Uyghur who has been critical of China’s conduct in Xinjiang.

“I am getting more worried about the youth,” she said. She fears mass surveillance will instill a desire to leave behind cultural and religious roots in favour of closer integration with the dominant Han Chinese culture. Then, she said, “maybe they will hate their own identity.”

Kazakh activist campaigning against Chinese crackdown on Muslims arrested by own government
March 10, 2019 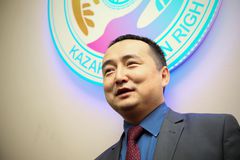 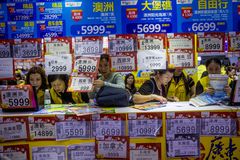 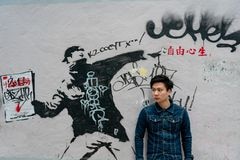