Eighteen months ago, China began using economic, political and judicial means to increase pressure on Ottawa after the arrest of Huawei executive Meng Wanzhou. Now, Beijing is taking a strikingly similar approach with Australia, after Prime Minister Scott Morrison demanded an inquiry into the origins of the deadly coronavirus.

China has blocked imports of some Australian beef and imposed a crippling 80-per-cent tariff on Australian barley, an echo of the measures it took against Canadian canola and meat.

The Chinese government has warned its people against travelling to Australia, citing a rise in discrimination against people from China and other Asian countries. Beijing similarly warned against travel to Canada, citing what it called the “arbitrary arrest” of a Chinese citizen, a clear reference to Ms. Meng, who is wanted in the United States on fraud charges and is in the midst of extradition proceedings in Canada.

“This is the playbook,” said Natasha Kassam, a former Australian diplomat to China who is now a research fellow with the Lowy Institute, a Sydney-based international policy think tank.

Beijing has a history of exacting economic retribution against countries that have earned its displeasure. Norway, South Korea, the Philippines and Japan have all suffered trade reprisals from China.

But China’s strikingly similar responses to Australia and Canada coincide with Beijing’s hardening stand toward U.S. allies, particularly those it sees as economically or politically vulnerable to its pressure. In Canada, the Justin Trudeau government initially sought a rekindling of ties with China, the world’s second-largest economic power. Australia relies on China for more than 30 per cent of its exports.

“China is seeking to divide and isolate alliance partners of the United States, and with Australia I think they see an opportunity to teach other countries a lesson,” said Ms. Kassam.

“Australians are at risk,” she said.

Behind the Chinese measures, some in Australia say, a new “geoeconomic world order” is taking shape, one in which global primacy is determined not just by economic size or military might but by the ability of a country to impose its will through its corporate, manufacturing and trade strength.

In that domain, China wields advantages, said Jane Golley, director of the Australian Centre on China in the World at the Australian National University.

“They’re the masters of it. They have the state-owned enterprises. They largely control, or can control, significant flows of credit. They can direct their economic actors in ways that neo-liberal market economies can’t. So they’ve got more geoeconomic power than just about anyone.”

What it means for Australia, Prof. Golley said, is clear: “They know they can hurt us. And we are going to hurt. We’re hurting already.”

Such tactics have soured public views of China in both Canada and Australia while effecting little change in their capitals. Ottawa has not intervened to release Ms. Meng from the extradition proceedings against her. Canberra, too, has shown no sign of changing course. On Thursday, Mr. Morrison vowed that Australia will “never be intimidated by threats,” saying the country will not abandon its values because of Chinese “coercion.”

In Canada, some suggest Australia itself bears some of the responsibility for what has taken place.

“My general sense is that Australia has been edging toward a major diplomatic conflict with China for some time,” said Paul Evans, a scholar with the Institute of Asian Research at the University of British Columbia. “Canberra has pushed a number of buttons in the past two years,” he said, pointing to a decision to ban Huawei from Australia’s 5G networks, new rules to counteract secret foreign influence efforts and, most recently, the calls for a coronavirus investigation.

Such steps “were bound to cause offence, but what has been distinctive has been the tone that puts Canberra closer than many other countries, including Canada, to the Cold War rhetoric coming out the U.S. … A little more subtlety would have gone a long way."

Canada, by contrast, “has learned pretty well how to manage conflicts with its biggest trading partner, recognizing the power imbalance,” Prof. Evans said.

Others, however, believe Canada would do better to more closely align with countries that have received similar treatment.

“China has been taking such measures and taking hostages with impunity, including the Garratts,” said Phil Calvert, a former diplomat who has served in Beijing and is now a senior fellow with the China Institute of the University of Alberta. Canadian coffee shop owners Kevin and Julia Garratt were detained in China in 2014. Accused of stealing state secrets and illegally providing them to overseas entities – the evidence against him included a picture of soldiers working beside a public road and a photo of a police jeep driving through town – Mr. Garratt was held for 775 days.

Michael Kovrig and Michael Spavor, the two Canadians detained following the arrest of Ms. Meng, have now been in Chinese custody for 549 days.

“It seems to me that the best reaction is a united front from concerned countries,” Mr. Calvert said. “For example, countries whose citizens have been taken hostage and others who support them out of concern for this behaviour could join forces and decide on a collective action beyond just issuing statements – trade measures, perhaps.”

Acting on its own, he added, Canada “is unlikely to come out on top or get a result in a tit-for-tat trade battle with China, but joining with others might be quite effective.” 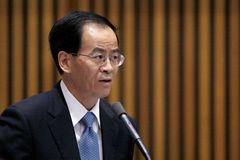