Nathan VanderKlippeAsia correspondent
Beijing
Published May 25, 2020 Updated May 26, 2020
Comments
Please log in to listen to this story. Also available in French and Mandarin. Log In Create Free Account

Beijing’s looming imposition of a security law on Hong Kong has spread fear through charities and advocacy groups in the city, as China prepares to go after foreign-backed organizations deemed to interfere in local affairs or carry out “destructive” or “subversive” activities.

For decades, Hong Kong was a haven for civil society, a safe place for activists who had fled China and an operational base on the fringe of the mainland for groups pursuing social justice, labour rights and democracy.

Now those groups are contemplating whether they can continue to exist as China prepares a national security law for Hong Kong that will take aim at what Beijing deems “foreign interference.” It’s a charge mainland authorities already routinely level against advocacy groups in the city.

“Hong Kong has been a refuge to Chinese activists and civil society groups. And the law would likely eliminate that refuge,” said Brad Adams, executive director of Human Rights Watch’s Asia division.

A draft order released by China’s National People’s Congress, the country’s rubber-stamp parliament, says the new law should oppose “any foreign or overseas forces interfering in the affairs of the Hong Kong Special Administrative Region in any fashion,” according to an English rendering by China Law Translate. The draft also pledges to “stop and punish foreign and overseas forces’ use of Hong Kong to carry out separatist, subversive, infiltrative, or destructive activities.“

The law itself has yet to be made public, and the Hong Kong Department of Justice said Monday that “it is inappropriate for anyone to make unwarranted speculations on the content of the legislation.” On Sunday, Chinese Foreign Minister Wang Yi said Beijing will target ”a very narrow category of acts that seriously jeopardize national security,” while leaving unaffected “the rights and freedoms of Hong Kong residents or the legitimate rights and interests of foreign investors in Hong Kong.”

But the draft directive follows Beijing’s sustained attacks on some non-governmental organizations operating in Hong Kong, particularly those that focus on human rights.

The Hong Kong Police Force has also rebuked Amnesty International after it documented police brutality toward protesters, including torture in detention. In September, Chief Superintendent John Tse accused Amnesty of distributing “malicious rumours” that “have affected the citizens’ confidence in the Hong Kong police.”

“The potential impact of this national security legislation could be very damaging to the work that we and others are doing,” said Joshua Rosenzweig, who leads Amnesty International’s China team. For now, Hong Kong remains a viable place for Amnesty to do its work, he said. But “the tone of the language in the NPC decision is worrying and forces us – along with many other organizations based in Hong Kong – to keep a watchful eye,” he said.

But there is little cause for concern, said Wang Zhenyao, founding dean of the China Global Philanthropy Institute, which is dedicated to cultivating generosity in China. The new security law will make Hong Kong’s NGOs “more healthy,” said Mr. Wang, a former official in China’s Ministry of Civil Affairs. Most of Hong Kong’s charitable organizations have nothing to fear – even those that operate with money from overseas. “If we can see that the source of the foreign funding has never been involved in activities that could harm national interests,” then the flow of that money “won’t be affected by this law at all,” Mr. Wang said.

Still, he suggested certain groups should not be considered NGOs.

“Groups that involve themselves in politics – I don’t think they can be regarded as NGOs or charitable groups at all.” After all, ”what country would allow its people to destroy subway exits and burn everything up?”

Those most at risk in Hong Kong are groups that operate with money from what Christine Loh, the chief development strategist at the Hong Kong University of Science and Technology, called a “politically connected funder,” such as those backed by the U.S. State Department. “There may also be other funding bodies where the funding of projects come from state-sponsored sources,” said Prof. Loh, a former politician who has operated a think tank in the city and has founded several non-profits.

A national security law passed in 2009 by Macau, which holds similar legal standing in China to Hong Kong, criminalizes links with foreign political groups for donations or for “the collection, preparation or public dissemination of false or grossly distorted news.” In China, strict laws place NGOs under official control and have made it difficult for groups to operate with foreign funding.

In Hong Kong, further worry has arisen over a provision in the draft security law order that says organs of the Chinese government “relevant for the protection of national security are to set up institutions” in the city. Such a security apparatus “could have very penetrating investigative power,” said Albert Ho, a former legislator with Hong Kong’s Democratic Party. “That itself is already very scary. It could create a lot of intimidation and harassment on Hong Kong NGOs.”

The fear is that “the scope of the new legislation could affect a very broad spectrum of business, civil society and educational institutions in Hong Kong,” said Geoffrey Crothall, the director of communications for China Labour Bulletin, which is dedicated to workers’ rights in China.

But if Beijing does take a strict approach to civil society in Hong Kong, it could force major change.

To adapt, some groups may “learn from their counterparts in China by operating under the radar,” Mr. Adams of Human Rights Watch said. Some may “stop being critical of the government. Others would relocate.” 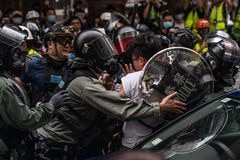 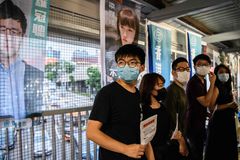