The skies over Beijing were illuminated by fireworks this week, as tens of thousands of spectators waved Chinese flags inside the Bird’s Nest, the famed Olympic stadium.

But the grand performance they had gathered to watch was celebrating not sporting victory, but political. Next month marks 100 years since the founding of the Chinese Communist Party, the 90-million-person strong organization that rules over the People’s Republic of China.

Such success seemed inconceivable even 50 years ago, when China was in the grips of the Cultural Revolution. Back then, Xi Jinping, now China’s President, was just one of millions of urban youth “sent down” to toil in the countryside.

Those who had a vision for future greatness, reformers such as Mr. Xi’s father, Xi Zhongxun, and the country’s eventual leader Deng Xiaoping, had to wait until Mao Zedong’s death in 1976 to begin transforming the country into the superpower it would become.

Often that transformation was achieved in spite of the Party not because of it. Many of the seeds of Mr. Deng’s economic miracle were laid by ordinary people during the Cultural Revolution. The “reform and opening” period would later be recast as purely a top-down success, with the Party “lifting” millions out of poverty, ignoring that many had been impoverished by earlier Communist policies.

Such nuance was not on display during the Bird’s Nest gala this week, nor will it be in any centennial celebrations. In today’s China, no interpretation of the past is permitted but the Party’s. Ahead of July 1, the authorities launched a hotline for citizens to report incidents of “historical nihilism,” with millions of posts scrubbed online.

And more than ever, the Party’s achievements, and those of the country, have become intertwined with the figure of Mr. Xi himself – the most powerful leader since Mao – for whom the centennial celebrations will also be something of a personal victory lap.

There is much to celebrate: more than a year from the start of the coronavirus pandemic, China has come out of it stronger than ever. On the international stage, Beijing largely shrugged off a concerted challenge from Washington during the Donald Trump administration, shows no signs of doing otherwise in response to renewed efforts by his successor Joe Biden, and continues to defy Western pressure over Hong Kong, Taiwan and allegations of genocide in Xinjiang.

“Success against COVID-19, economic recovery, [China’s] growing influence in the developing world make it a great power that the world can no longer afford to ignore,” said Lynette Ong, an expert on Chinese politics at the University of Toronto. “This is particularly the case when China is juxtaposed against sluggish economic growth in the U.S. and the rest of the Western world.”

Mr. Xi, too, is in a position of enviable strength, his grip on power unchallenged. He is on course to secure an almost unprecedented third five-year term as general secretary.

There are reasons for a degree of paranoia behind the wall-to-wall propaganda and insistence on controlling the historical message along with the sense that if people are allowed to think for themselves, they might not cast such a rosy eye on the Communist Party.

China is facing numerous challenges both domestic and international: an ageing population, slowing economic growth and territorial spats on seemingly every border. By gathering more and more power to himself, Mr. Xi has concentrated the potential risk of failure as well.

“Xi believes he can mold China’s future as did the emperors of the country’s storied past. He mistakes this hubris for confidence – and no one dares tell him otherwise,” Jude Blanchette, a China analyst at the Center for Strategic and International Studies, wrote this month. “An environment in which an all-powerful leader with a single-minded focus cannot hear uncomfortable truths is a recipe for disaster, as China’s modern history has demonstrated all too well.”

Mr. Xi’s far-reaching anti-corruption campaign has served to rein in both the political and business elite, but the more he signals he’s not going anywhere, the greater the chance of internal challenge from equally ambitious Party upstarts.

Prof. Ong, the University of Toronto analyst, questioned “to what extent is he capable of keeping elite dissent tightly under control is uncertain, as it is highly contingent on a number of factors, such as continued growth that keep the elites happy, and if the pie stops growing, there must be redistribution among the elites to benefit those who pose a threat to him.”

“But the signs coming out of China these days are tighter control across-the-board – from the private sector, technology giants to political elites and society,” she added. “Thus, where is the give-and-take going to happen?”

The CCP’s longevity – surviving the death of Mao, the collapse of the Soviet Union and numerous economic shocks – has in part been due to an ability to adapt to the requirements of the day, such as transforming from an aggressively Marxist organization to one that counts some 100 billionaires as members.

But such flexibility often came from a position of weakness, and as the Party enters its second century in a position of unprecedented strength, it remains to be seen how success shapes its ability to respond to future challenges.

James Griffiths is The Globe and Mail’s new Asia correspondent. Currently based in Hong Kong, he joins The Globe after more than five years with CNN, reporting on the ground from China, South Korea, Malaysia and Sri Lanka, among other countries. 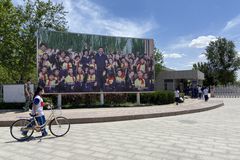