Police in China said they have detained a 30-year-old Canadian man with the surname of Wu on suspicion of committing rape, with state media identifying him as Chinese-born pop singer Kris Wu.

Mr. Wu was being investigated over accusations made online of “tricking young girls into having sex with him,” according to a statement by police in the Chaoyang district of Beijing late on Saturday.

In the post on China’s Twitter-like Weibo, the police did not spell out his full name, but gave his age and his nationality. The People’s Daily soon shared the post and identified him as Kris Wu.

Mr. Wu’s personal Weibo account and that of his studio were found to be shut down on Sunday.

Mr. Wu was publicly accused last month by an 18-year-old Chinese student of inducing her and other girls, some of them under the age of 18, to have sex with him.

Influencer Du Meizhu told Chinese media last month that Mr. Wu had lured her into having sex when she was 17 after plying her with liquor. A police statement last month said the student was invited by Mr. Wu’s team to his house for casting in music videos.

Mr. Wu has previously denied the accusation and was not contactable on Sunday.

In a statement on Sunday, Global Affairs Canada said it was aware of the media reports and that consular officials were liaising with local authorities to gather more information. Because of the Privacy Act, no further information would be disclosed.

After Ms. Du spoke out, more than two dozen other women have come forward online to accuse Mr. Wu of similar misconduct, according to state media. Several of the accusers are teenagers. The legal age of consent to sexual activity in China is 14.

It was not immediately clear whether Mr. Wu’s arrest was linked to the student who made the accusations in July.

Mr. Wu, born in the southern Chinese city of Guangzhou and moved to Vancouver with his mother when he was 10. IMDB says Mr. Wu attended Point Grey Secondary School and Sir Winston Churchill Secondary School, both in Vancouver. In an interview with VladTV in 2018, Mr. Wu said he had a huge passion for basketball when he was a teenager and once played for a B.C. team.

At the age of 18, he auditioned in Vancouver for one of the largest entertainment companies in South Korea, SM Entertainment. He then found fame with the K-pop group EXO.

He appeared in several NBA All-Star Celebrity Games. In 2016, he played with Team Canada and, in 2018, he was a teammate with Justin Bieber.

At least a dozen brands including Porsche and Bvlgari cut ties with Mr. Wu after the accusations, which have caused a social-media storm in China.

In 2017, Mr. Wu ranked 10th on the Forbes China celebrity list, with earnings of close to US$29-million. His ranking rose to eighth last year.

Chinese state media have indicated that Mr. Wu’s celebrity status and foreign citizenship are unlikely to help his case.

“Foreign nationality is not a talisman, no matter how famous he is, there is no immunity. Whoever breaks the law will be punished by law,” said the Communist Party-owned People’s Daily on a social-media posting on Saturday that referred to the case.

Other political organizations in China such as the Communist Party’s Central Political and Legal Affairs Commission (CPLAC) and its Central Commission for Discipline Inspection (CCDI), an anti-graft unit, also voiced criticism of Mr. Wu.

CPLAC, echoing the People’s Daily, commented on Weibo, saying everyone needs to abide by Chinese laws as long as they are in China. CCDI posted an article on its Wechat account, saying that some public figures enjoy popularity and resources but are not able to shoulder social responsibilities. It stressed that complying with laws is the “bottom line.”

Reuters, with reports from The Globe and Mail’s Xiao Xu in Vancouver and James Griffiths in Hong Kong 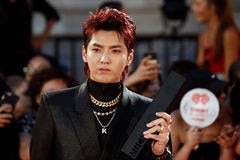