China’s parliament approved a decision on Thursday to go forward with national security legislation for Hong Kong that democracy activists in the city and Western countries fear could erode its freedoms and jeopardize its role as a global financial hub.

China says the new legislation will aim to tackle secession, subversion, terrorism and foreign interference in the city but the plan, unveiled in Beijing last week, triggered the first big protests in Hong Kong for months.

Thursday’s move brought immediate condemnation from the United States, Britain, Australia and Canada. U.S. President Donald Trump’s economic adviser said Hong Kong may now need to be treated like China when it comes to trade and other financial matters.

“We can’t let this go unnoticed and they will be held accountable for that,” National Economic Council Director Larry Kudlow told CNBC.

Trump, who has vowed a tough U.S. response, told reporters he would hold a news conference on China on Friday. “We’ll be making certain decisions and we’ll be discussing them tomorrow,” he said.

The security law is fuelling fear that Beijing is imposing its authority and eroding the high degree of autonomy the former British colony has enjoyed under a “one country, two systems” formula since it returned to Chinese rule in 1997.

Last year, Hong Kong was rocked for months by often violent pro-democracy demonstrations over an unsuccessful bid to introduce a law governing extradition to China.

Riot police were out in force in Hong Kong as its lawmakers debated another piece of legislation, a bill to criminalize disrespect of China’s national anthem.

Members of China’s mostly rubber stamp parliament, the National People’s Congress, burst into prolonged applause when a tally showed 2,878 votes to one in favour of moving forward with legislation, with six abstentions.

Details of the law, which could see Chinese intelligence agencies set up bases in the city, are expected to be drawn up in coming weeks. It is expected to be enacted before September.

Chinese authorities and the Beijing-backed government in Hong Kong say there is no threat to the city’s autonomy and the new law would be tightly focused.

The law would be good for Hong Kong’s long-term stability and prosperity and the “one country, two systems” formula would remain a national policy, Premier Li Keqiang said.

Beijing’s move comes at a time when U.S.-China tensions have worsened amid mutual recriminations over the coronavirus pandemic, which began in China but has hit the United States hardest.

Under congressional legislation Trump signed last year, it now falls to him to decide to end some, all, or none of the U.S. economic privileges the territory enjoys.

U.S. officials and people familiar with the discussions said the administration is crafting a range of options, including targeted sanctions, new tariffs and further restrictions on Chinese companies.

Two sources told Reuters on Thursday Washington was also planning to cancel the visas of thousands of Chinese graduate students believed to have links with China’s military.

While Trump has promised tough action on Hong Kong, his response is likely to be tempered by concern about the effect on the more than 1,300 U.S. companies that have offices in the city and provide about 100,000 jobs.

Hong Kong’s Beijing-backed leader Carrie Lam said her government would work with Beijing to complete the legislative work as soon as possible.

“The law will not affect the rights and freedoms enjoyed by Hong Kong residents,” she said in a statement.

Democracy campaigners in the city were despondent, however.

“This is the death knell for Hong Kong, make no mistake of it, this is the end of ‘one country, two systems’ … the Hong Kong that we loved, a free Hong Kong,” said pro-democracy lawmaker Dennis Kwok.

“This is show time for Hong Kong,” she wrote in a commentary for the South China Morning Post. 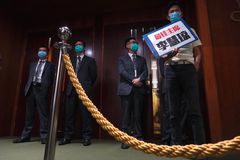 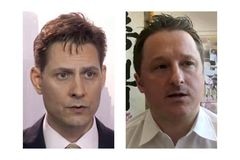 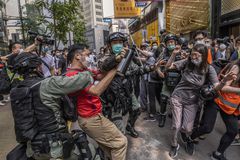