Inside the granite walls of a Beijing courthouse Monday, authorities held a secret trial for Canadian Michael Kovrig, a closed-door hearing that one legal scholar called a “showcase” of justice in China.

Chinese authorities again denied requests by Canada and others to observe the trial, leaving dozens of diplomats to stand outside the courthouse on a sidewalk, while police grabbed and kicked journalists.

With the entire process shrouded in secrecy, little was known about what took place inside: how and when Mr. Kovrig was brought to court, what evidence was brought against him and what opportunities he had to speak in his own defence.

China has put Michael Kovrig and Michael Spavor on trial in secret. What now?

Just before 6:30 p.m., court authorities issued a statement confirming that a trial for Mr. Kovrig had been held and that a verdict would be announced at a later date. No other details were released, leaving little change in the information void surrounding the case.

“We have no insight into what happened,” said Jim Nickel, Canada’s charge d’affaires in Beijing, speaking on a darkened street outside the courthouse after nightfall.

“Michael Kovrig has been detained arbitrarily in China for more than two years now – precisely 833 days. This is completely unacceptable.”

Some 22 countries sent representatives to the trial, in addition to the European Union, in a broad show of support for Mr. Kovrig, whose detention alongside fellow Canadian Michael Spavor has widely been described as an act of hostage diplomacy.

Authorities completed a two-hour trial for Mr. Spavor on Friday.

“The United States stands shoulder to shoulder with Canada in calling for the immediate release of their two citizens from arbitrary detention,” said Bill Klein, the acting deputy chief of mission for the U.S. embassy.

Both men were seized by Chinese state security agents days after the arrest of Huawei executive Meng Wanzhou at the Vancouver airport.

Mr. Kovrig has “been arbitrarily detained, and now we see that the court process itself is not transparent,” Mr. Nickel said Monday. “We are very troubled by this.”

Foreign demands for access were rejected by Chinese authorities, who say the country’s laws require cases involving state secrets to be conducted in private. “That means nobody can enter to observe the trial,” a court worker said. In response, international legal experts have pointed to China’s consular agreement with Canada, which specifically bars domestic law from pre-empting consular rights.

“It sends a strong message that China does not play by the same rules it expects other countries to abide,” said Jorge Guajardo, a former Mexican ambassador to China. It is “just China being China, expecting to be above the rules.”

At the same time, the large number of diplomats who attended the trial sent a signal of its own, said Margaret McCuaig-Johnston, who is on the advisory board of the Canada China Forum.

“Countries are banding together to tell Beijing that this is not behaviour befitting an aspiring superpower,” she said. Chinese President Xi Jinping “should pay attention to what’s going on outside the courthouse in Beijing and anticipate what could happen if all those countries collectively sanction China and its officials.”

Canadian law allows for closed hearings as well, she said, before criticizing the Canadian government for “gross interference in China’s judicial sovereignty.”

“We admonish Canada that engaging in microphone diplomacy and forming a clique to exert pressure on China will never succeed,” Ms. Hua said. “It will ultimately only be a waste of effort.”

China’s leaders do not want the country “to be viewed as a rogue state,” said Wang Jiangyu, a professor at the City University of Hong Kong School of Law and joint editor-in-chief of The Chinese Journal of Comparative Law.

The trials of the two Canadians, which have cast a bright light on a justice system that carries out much of its work in secret – not disclosing a single piece of evidence against them, even after completing hearings that could lead to life sentences – but nonetheless generally follows set procedures.

“This whole process is very much a showcase of China’s justice system,” Prof. Wang said. “China does not seem to be very afraid of that, as it believes that it is following its own law.” Barring access to the trial, for example, could be seen as fair treatment. “Under Chinese law, national state-secrecy-related cases are not open,” he said.

At the same time, China has stretched the timelines for the arrest and trial of the two Canadians beyond what is normally prescribed in the country’s procedural law. “The period that it has taken for these two cases to proceed has been abnormally long,” said Wu Qiang, a former Tsinghua University scholar who is researching what he calls China’s conduct outside the bounds of its own laws.

In a legal sense, “what the international community now faces is the problem of a Chinese default,” he said. “China faces a systemic default on everything from the Vienna consular treaties to the United Nations Charter to the human-rights conventions it has itself signed.”

As for Mr. Kovrig and Mr. Spavor, their trials amount to “a performance that China has directed at international society. It is an essential part of China’s hostage diplomacy,” he said. “China is holding this trial to show the world its determination. It is strengthening the scale of the aggressive signal it is sending to the world.” 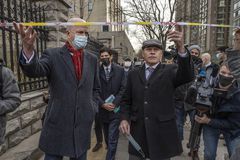