Li Yonghui is a millionaire many times over, a Chinese-born entrepreneur with a Canadian passport who has previously been jailed, fought accusations of fraudulent accounting and, for the past year, employed dissident tactics to mount a high-profile campaign against local officials cracking down on his company.

Last Friday, his efforts came to a dramatic head, when authorities seized him in Shijiazhuang while he was on a morning walk outside the 52-storey high-rise owned by the company he founded, the U.S.-traded Fincera Inc., which has built a financial technology business lending investors’ money to small and medium enterprises.

It was part of a co-ordinated sweep that, in short order, took down a company that had been held up as a Canadian success story in China. Now, it’s become a particularly vivid example of the potential consequences of doing business in a country where politics holds heavy sway and justice can be delivered bluntly.

Mr. Li has built multiple businesses – in real estate development, truck leasing and small-business lending. But his company, Fincera, prospered in a corner of the Chinese financial world, where other companies have committed major fraud. Fincera denies wrongdoing, but last Friday morning, its servers were abruptly pulled offline. Police surrounded the company’s headquarters in Shijiazhuang, an industrial centre that is the capital of Hebei province in northern China. About 300 kilometres away in Beijing, dozens of officers descended upon a satellite office, detaining employees from morning until night, preventing them from using their phones and carting away computers and paperwork before loading about 10 people in a bus and driving them to Shijiazhuang.

In the following days, the number of detained employees rose to 38, out of roughly 750 in total. Border authorities have barred Mr. Li’s son, Spencer, who is also Canadian, from leaving the country, accusing him of involvement in illegal financing. (Although diplomatic tensions are high between Canada and China, there is no indication that the allegations against the men are related to their nationality.)

In a statement, Global Affairs Canada spokesman John Babcock said the department “is aware of the detention of a Canadian citizen in Hebei. Consular officials are in contact with local authorities and are providing consular assistance to the individual.”

He added: “While Canada cannot control the laws or entry and exit requirements of another country, we hope and expect that Canadians are treated in a fair and transparent manner during their travels.”

What took place at Fincera was ”a sudden attack,” said James, whose wife worked in the company’s accounting department and was among those detained. The Globe and Mail is identifying him by his English first name only because of the risk of speaking out in a continuing legal situation. James was himself among those held by police last Friday, after rushing to the office to inquire about his wife after he stopped hearing from her. He was let go after five hours, urging his wife to “be brave” as he left.

Fincera was founded by Mr. Li, a serial entrepreneur who secured a Canadian passport in 2000, but did his life’s main work in Shijiazhuang, where Fincera’s assets reached nearly $900-million in value, according to company estimates this summer.

His was a career, however, marked by turbulence. Authorities once locked him up for three months when he tried to buy a state-owned hotel, before releasing him without charges. Later, the company he founded, then called AutoChina International Ltd., came under attack by short-sellers who alleged financial fraud. Nasdaq delisted the company (it’s now traded over the counter) and the U.S. Securities and Exchange Commission issued market manipulation charges, leading to a US$4.5-million settlement in 2014. AutoChina admitted no wrongdoing.

Mr. Li’s most recent business created a large peer-to-peer, or P2P, lending service, a financial structure that involves gathering money from investors and lending it out. Investors receive interest, small businesses obtain working capital and Fincera earns facilitation fees. It’s a model that gained rapid popularity in China over the past decade until a series of high-profile failures, with some companies exposed as Ponzi schemes that had attracted billions of dollars from investors.

Chinese regulators stepped in with a series of new rules in 2016, and by the end of June of this year, 4,748 P2P platforms had vanished. By this December, only 456 remained, according to industry statistics.

Fincera was among those holding on, with Mr. Li, 57, convinced he had made changes necessary to stay onside of the new rules, his son said. Instead, the company found itself increasingly squeezed by local authorities, told to cut its outstanding loans, which total $1.6-billion, by two-thirds.

But “we refused to scale down,” Spencer said. ”We follow central regulations.” But Spencer said some local leaders are conservative in their outlook and see P2P as tainted and risky. “They don’t want anything to happen on their watch.” Mr. Li has faulted officials in the office of the Shijiazhuang mayor and finance bureau.

In fact, regulators across China are “trying to wind down the entire industry in a gradual and orderly fashion,” said Zhu Ning, an expert on the Chinese economy who is deputy dean at Shanghai Advanced Institute of Finance. The idea is to prevent large well-developed firms “from getting into trouble. The advice is for the platforms to repay their existing obligations and reduce, if not stop, the issuing of new products.”

Fincera, however, sought to stand fast against the tide. Mr. Li adopted the tactics of a dissident. He used a megaphone outside local government offices to broadcast complaints. He posted critical open letters on social media, in which he combined arguments of legal defence with stinging corruption allegations. In one, he accused financial regulators of using well-placed family members to cash in on the industry they are meant to oversee.

Meanwhile, his business grew more difficult. Local authorities asked local P2P companies to voluntarily close down. When Fincera refused, it began to run into obstacles. It failed in an attempt to move operations to Beijing, blaming interference from local officials. It was unable to raise cash by selling assets – because of local interference, it says. Government offices in Shijiazhuang then refused to process regular business paperwork.

Local officials told Caixin, a Chinese financial publication, that Fincera is a “high-risk institution.” As rumours spread that the company was under scrutiny, its non-repayment rate rose. Government pressure meant people didn’t “have any incentive” to repay, Spencer said.

Then, on Friday, officers descended.

Fincera is accused of illegal acceptance of public funds. The company called the allegations “without merit,” saying it “vehemently disagrees with the investigation.” Statements from authorities, however, suggest “there’s very little chance the company will be reopened. I think investors will suffer some losses,” Prof. Zhu said. The company counts 26,117 borrowers and 77,172 lenders, Caixin reported.

“My dad didn’t really have to fight the government,” Spencer argued. Mr. Li simply wanted to support those who counted on his company, his son said. 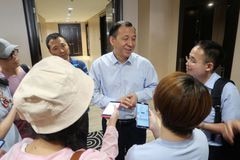