It took the coronavirus crisis – alongside the threat of an unprecedented fourth election in just over a year – but Israeli Prime Minister Benjamin Netanyahu has finally convinced rivals to join a coalition government that he will lead even while facing corruption charges.

A pact agreed on Monday night creates the basis for a broadly-based government of national unity, that parties from across Israel’s political spectrum are expected to join. However, the deal represents a clear victory for Mr. Netanyahu, extending his run as the country’s longest-serving prime minister, after three elections that produced no clear winner.

Mr. Netanyahu left his opponents with little choice but to join him in government if they wanted to avert a fourth consecutive election. He now has the green light to move ahead with plans to annex some or all of the West Bank – which has been under Israeli military occupation since a 1967 war – in accordance with the peace plan unveiled earlier this year by U.S. President Donald Trump. The plan upends decades of U.S. foreign policy and could inflame the conflict, say experts.

Israeli media reports say the coalition agreement includes a clause allowing for territorial moves in the West Bank as early as July 1.

The country’s political right has long sought the annexation of Jewish settlement blocs in the West Bank, as well as the strategic Jordan Valley. The construction of settlements is considered by most countries as breaking international law because they sit on occupied land. Such moves would dramatically undermine the feasibility of an independent Palestinian state. “The formation of an Israeli annexation government means ending the two-state solution and the dismantling of the rights of the people of Palestine as established under international law and resolutions,” Mohammad Shtayyeh, the prime minister of the Palestinian Authority, said Tuesday.

Hamas, the militant Islamist movement that controls the Gaza Strip, said the coalition agreement “confirms the failure of the so-called peace process.”

Benny Gantz, whose Blue and White party fought Mr. Netanyahu’s Likud to effective draws in a trio of elections since April 2019, becomes defence minister and will assume the newly created post of “substitute prime minister” – a job that will come with an official residence in Jerusalem – for the first 18 months of the new government. The two leaders are supposed to swap jobs in October 2021.

Mr. Netanyahu is likely to still be in the prime minister’s post when he faces trial on charges of bribery, fraud and breach of trust. With the initial court hearing scheduled for May 24, the coalition deal reportedly contains a clause that would send the country into a fourth election if the Supreme Court intervened to rule that Mr. Netanyahu could not serve as prime minister while standing trial.

Despite the indictments, Mr. Netanyahu – who has been in office since 2009 – will retain the power to choose the country’s next attorney-general, as well as the state prosecutor and head of the national police force.

The deal represents a capitulation by Mr. Gantz, a former army chief who had previously vowed that he wouldn’t join a government led by Mr. Netanyahu. The Blue and White party fractured last month over Mr. Gantz’s decision to enter coalition talks with Mr. Netanyahu. If and when the two men swap jobs, Mr. Netanyahu will likely remain the most powerful person in government, as he will control the largest share of the coalition’s parliamentarians.

In the shorter term, Mr. Netanyahu has clear responsibility for the country’s handling of the coronavirus crisis, with Likud and its right-wing allies expected to retain control of the crucial health and finance ministries.

“Gantz doesn’t want any part of [the coronavirus file]. He doesn’t want to take responsibility,” said Mitchell Barak, a Jerusalem-based political analyst. “The problem is, Gantz will be blamed if it’s a failure, because he’s deputy PM. But if it’s a success, it’s all [Mr. Netanyahu’s].”

The coalition government is expected to include parties from across Israel’s wide political spectrum, from right-wing religious groups to the left-wing Labour Party.

Peace Now, a left-wing movement that favours an agreement with the Palestinians based on the two-state solution, criticized Mr. Gantz for entering a government that was focused on annexing territory even amid the coronavirus pandemic. “Anyone who bolsters the far right now will be responsible in the future if annexation is implemented and Israel’s democratic future is imperilled,” the group said in a statement.

But Mr. Barak said the July 1 annexation schedule would likely prove difficult to implement as COVID-19 continues to take its toll and Israel’s economy, like most around the world, slides into recession. “If the economy is tanking, no one is going to be dealing with [annexation],” he said. “By the time we hit July, we’re going to be in a different world.” 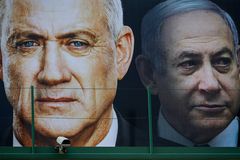