Thousands of Colombians gathered in cities across the country Friday night to demand an end to a wave of activist killings that threatens to undermine a fragile peace process.

Demonstrators holding candles filled Bogota’s main Plaza Bolivar to draw attention to the 311 leftists and human rights defenders that authorities say have been killed since 2016, the year the government signed a landmark peace deal with the Revolutionary Armed Forces of Colombia.

The gatherings in almost 50 cities came a little more than two weeks after Ivan Duque was elected Colombia’s president, and the conservative politician’s pledge to roll back parts of the accord was on many protesters’ minds.

“A lot of us are worried that with the change of government the progress in terms of human rights and the peace deal is at risk,” Chris Duarte said as she collected handwritten letters of support that she intends to deliver to activists in high-risk rural areas where the vast majority of the killings have taken place.

The protests were organized hastily over social media following an especially bloody week in which at least four activists were slain, including a campaign worker for Gustavo Petro, Duque’s leftist rival in the polarizing presidential race.

Ana Maria Cortes died Tuesday when an unidentified gunman opened fire at her at a coffee shop just a few steps from a police station in the western town of Caceres.

Defence Minister Luis Carlos Villegas further alarmed many people by claiming, without offering any evidence, that Cortes might have been linked to Colombia’s biggest drug-trafficking organization.

“This is a sad mistake,” Adam Isacson, a Colombia expert at the Washington Office on Latin America, said of Villegas’ comments.

He said that instead of publishing information on victims, authorities should focus on the killers and those who fund and direct them.

Petro said that Cortes had denounced the town’s mayor for corruption and that she and other campaign workers were targeted with insults and threats by the local police chief.

While homicides in Colombia fell to the lowest level in four decades in 2017, activists tied to causes like peasant land rights and the environment are increasingly under threat, especially in remote areas where drug-trafficking gangs and dissident rebel groups are operating.

Many of those gathered Friday said they feared a return to the campaign of extermination that followed a previous attempt at peace with the FARC in the 1980s. Thousands of former guerrillas, communist militants and trade unionists were gunned down by paramilitary death squads, sometimes in collaboration with state security forces.

Outgoing President Juan Manuel Santos, the architect of the peace deal, has boosted resources to investigate the killings and punish those responsible. The chief prosecutor’s office says it has identified the perpetrators in half of the 178 slayings of social leaders that it has registered since 2016 and made 184 arrests.

But the killings continue – on average one every three days, according to the government’s top human rights official.

Duque joined Santos and the United Nations in condemning the killings.

“I don’t accept that any Colombia undergo threats because of their political thinking, race or personal beliefs,” the president-elect said from Spain. “I want a country where the law shines and all Colombians feel protected.”

Jonathan Melo, a government employee, said he is tired of politicians’ promises and worries the opportunity to end decades of civil conflict could be squandered, given that some of Duque’s allies have vowed to tear the peace accord to shreds.

“It’s been a year and a half since authorities started warning about this problem,” Melo said at a demonstration in Bogota’s wealthier north, “and so far the killings are still taking place.” 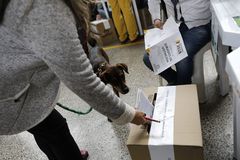 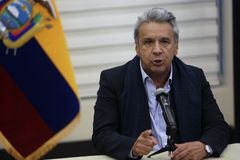 Colombia’s peace deal brings a new season of fear for those who live in areas once controlled by FARC
June 17, 2018 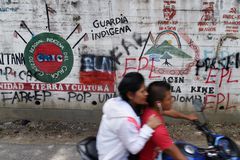