Colombia and Cuba are locked in a stalemate over the extradition of 10 guerrilla leaders on the island nation after negotiations to end Colombia’s last armed conflict broke down earlier this year. Colombian President Ivan Duque ended talks after the leftist National Liberation Army (ELN, in its Spanish acronym) killed 21 people and injured 68 more in a car bombing at a police academy on Jan. 21. Mr. Duque demanded that Cuba hand over the leaders who had been in Havana for talks; Cuba refuses, saying the Colombian president is violating the terms of protocols established for the negotiation.

The diplomatic spat, which also involves other countries in the region and European nations that were acting as guarantors for the talks, is the latest sign of how difficult it is for Colombia to bring full peace to a still sharply polarized and unequal country.

In the immediate wake of the attack, Mr. Duque also had his chief prosecutor reissue arrest warrants, and reactivate Interpol alerts, for the ELN leaders with whom his government had been negotiating in Cuba, and demanded that Cuba extradite them for prosecution. The demands violate the protocols for the talks – terms for which Cuba, Norway, Brazil and Chile are guarantors – which include a clause that says that in the event the ELN left the table without a deal, its leaders would have 15 days, including a 72-hour cessation of hostilities, and safe passage back to ELN-controlled territory in Colombia.

Mr. Duque said the protocols don’t apply to him, since they were signed by the previous president – but the other nations were quick to remind him that the signature of a government is binding, regardless of changes in head of state. His move shocked even Colombia’s close allies: Such protocols are viewed as fundamental in any conflict negotiation, and Mr. Duque’s decision sets a dangerous precedent.

“It was clumsy, unstructured and not well-thought-out,” said Jorge Restrepo, the director of the Conflict Analysis Research Centre in Bogota.

And it was bad for Colombia’s domestic security, he added, because the ELN leaders stayed in Cuba, where the organization has deep roots. “Now they have a safe haven – are they preparing for war? Purchasing new weapons? We don’t know because they are in Cuba.”

The ELN insisted that the January bombing was “legitimate” because the police academy was a military target in a decades-long campaign to win a radical change in Colombia’s state structure. (International humanitarian law says students are not justifiable targets.) But the attack outraged most Colombians, costing the ELN precious political capital.

The bombing was ordered by an ELN commander who opposes the peace talks in Cuba, and who has stayed behind, moving across the border with Venezuela.

Attacks like these are a risk in this form of negotiation in which the parties talk even as conflict carries on, said Frank Pearl, calling the bombing abhorrent but not unexpected – and no excuse for violating the protocols. Mr. Pearl is a Colombian-Canadian who served as a senior peace negotiator for successive Colombian governments; he was the first to make contact with the ELN, more than a decade ago, and it was he who signed the protocols in the name of the Colombian government. The Duque government knew about the protocols when it took power last August, he said, and did not reject them; and in fact conducted more than a half-dozen unpublicized meetings with the ELN in Cuba before the bombing.

In contrast with the Revolutionary Armed Forces of Colombia (or FARC, in Spanish), the best-known Colombian rebel group, who signed a peace deal with the government in 2016, the ELN is smaller, more radical and less cohesive, and achieving peace with the ELN is likely to be even more difficult than the long, painful process with the FARC, Mr. Pearl said. The ELN has an estimated 2,500 armed fighters, compared to the 9,000 the FARC had when the peace deal was signed. The ELN has control in five areas of the country, but is isolated and does not have logistical or even communication lines between those areas. The ELN has a more opaque agenda, rooted in ideas of social participation, with fewer concrete demands than the FARC.

“They are much more rigid ideologically than FARC, much, much more," said Mr. Pearl, who met with the ELN for years, first covertly in the jungles of Brazil and Ecuador, and later in formal negotiations. “It’s difficult to advance. It takes more time. It’s tougher because of the way they conduct discussions. And their ideology is so strong. But with patience? There’s no one issue on the ELN’s agenda that cannot be negotiated in terms that are acceptable for the Colombian government and the people of Colombia.”

Mr. Duque heads a right-wing government that had seen its support in public-opinion polls decline steadily after his election – until the bombing, when his hard-line response to the ELN sent his popularity soaring by about 19 per cent. Now, Mr. Pearl said, he’s trapped – the country needs the conflict solved, but Mr. Duque has aligned himself with the most hawkish elements of the Colombian right who reject all negotiating. The ELN, however, with its underground, largely urban structure, can’t be crushed through military confrontation.

Carlos Velandia Jagua, a former ELN commander who spent 10 years in prison for his guerrilla activities and now acts as a consultant on peace and conflict issues, said the ELN misread Mr. Duque’s willingness to continue the negotiations track begun by the previous government. “The ELN has a problem right now interpreting reality – it’s too ideological and not realistic,” he said. The bombing was likely about more than just divisions within the group, he added. “It was a threat – ‘take me seriously or forget it.’ ”

While the January bombing made international headlines, the ELN carries out almost daily attacks in the areas it controls, targeting the oil and gas industries in particular. But Prof. Restrepo said he is not without optimism: The ELN could declare a unilateral ceasefire, he said, because of how badly it was weakened by the fallout from the bomb, or there could be a mediated negotiation in secret. Perhaps most likely, he said, the improvements in Colombia’s security that have resulted from the FARC deal may make clear to the ELN that it has no future as a guerrilla movement, sandwiched between pressure from the armed forces, and other criminal groups who don’t want interference in their illegal drug, mining and logging businesses. 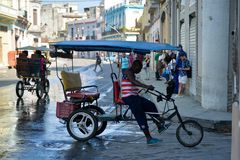