A year after an inferno engulfed Paris’s Notre-Dame Cathedral, salvage and reconstruction works are running months behind schedule, delayed by massive quantities of toxic lead, winter storms and now the coronavirus pandemic.

A suspected electrical short circuit or cigarette butt at dusk on April 15 ignited a spark in the cathedral’s attic.

Flames tore through the oak-framed roof and consumed its spire as Parisians lined the banks of the Seine and millions around the world watched in horror.

With France’s 67 million people under lockdown as Europe battles to contain the coronavirus outbreak, the delicate work to make Notre-Dame safe again has shuddered to an abrupt halt.

When President Emmanuel Macron announced the order on March 17, workers had just started to dismantle the 40,000 pieces of scaffolding left in a tangled molten mess by the fire.

That work had been slated for the autumn, but was delayed by an investigation into the dispersal of clouds of poisonous lead during the blaze and then by a series of winter storms.

Only when the twisted 200-tonne cage has been removed, will engineers be able to inspect how structurally sound the damaged vaults are, Jean-Louis Georgelin, in charge of the rebuild, told Senators in January.

“The restoration phase will no doubt begin during 2021,” Monsignor Patrick Chauvet, the rector of Notre-Dame, said.

However, last week the city’s archbishop held a small ceremony in the cathedral to mark Good Friday amid the coronavirus pandemic.

Only seven people attended the service in the apse behind the Pieta due to the lockdown but many more watched on television.

Even as Notre-Dame still smouldered, Macron promised it would be rebuilt “even more beautifully” within five years. The delays have dealt a reality check to the president’s ambitions.

Chauvet said the aim was for Notre-Dame to be open for mass by 2024.

“What’s important is that we can breathe life back into the cathedral, that the archbishop can return, that we can pray inside once more and sing a beautiful Te Deum,” the rector said.

“All that is the cathedral’s outside beauty, its damaged stones, its gargoyles, the spire, all that we can do (later).”

The delays are already pushing the costs higher. Georgelin’s team is already studying how it can return a small number of workers to the site before France begins its planned unwinding of the lockdown on May 11.

So far, only about a fifth of the more-than €900-million pledged to help finance Notre-Dame’s restoration have been received, though officials are confident commitments will be upheld.

Some people have questioned whether the economic turmoil wrought by the coronavirus shutdown might test donors resolve.

“We cannot say yet that the cathedral is saved,” said Jeremie Patrier-Leitus, a spokesman for the reconstruction project.

Notre-Dame Cathedral is so fragile there’s a ’50-per-cent chance’ structure might not be saved, rector says
December 25, 2019 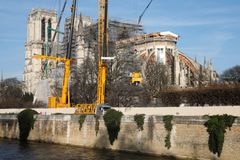 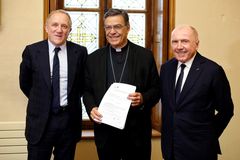