A couple of baguettes tucked under her arm, Maha Rambousek fiddled with a face mask that kept sliding off her nose. After a local decree made masks mandatory in public, she had quickly stitched it together but was left confused when the policy was overturned two days later by the central government.

“I don’t know who’s wrong or who’s right,” Ms. Rambousek said. “And I can’t turn to anybody for certainties.”

The measure in Sceaux, a well-to-do suburb just south of Paris, was one of an increasing number of exceptional local challenges to the government’s handling of the coronavirus outbreak, which has shaken confidence in a cornerstone of French society: the primal authority of the centralized state.

The city of Perpignan lodged contagious patients in a hotel after the central government told people to self-isolate at home. Officials in the city of Marseille carried out widespread testing of both the sick and healthy even as the government ordered that only the seriously ill be tested. The city of Paris tightened a national lockdown by banning daytime jogging.

While France’s vaunted health care system has staved off disaster, France has suffered the world’s fourth-biggest death toll – now at 23,660 official deaths, behind the United States, Italy and Spain – a consequence, critics say, of the central government’s failure to anticipate the onslaught of the contagion.

That failure and a critical shortage of masks and testing kits – also resulting from gaps in state policies – led to the virus’s rapid early spread, prompting France to impose one of the world’s strictest nationwide lockdowns, now in its seventh week.

Prime Minister Édouard Philippe announced a tentative plan Monday to gradually reopen the country starting May 11. Schools and businesses would start reopening, although not restaurants or cafés. He urged companies to keep their employees working at home. And he promised that masks and testing would be made sufficiently available.

But it was not clear that those steps would halt what polls show is declining confidence in the government’s handling of the pandemic.

“Trust in the state has been eroding for some time, since the state is no longer able to respond to the need for security,” said Philippe Laurent, the mayor of Sceaux and the secretary-general of the Association of Mayors of France.

About a dozen complaints have been lodged by individuals and medical organizations with the French Court of Justice, a special court that hears accusations of government mismanagement. Several officials have been accused of wilfully failing to take appropriate measures to combat the virus, endangering people’s lives.

The government’s failure to stem the initial outbreak undermined the important social contract between the state and the people, said Pierre Vermeren, a historian.

“We have some of the highest taxes and biggest public spending in the world, and the French people accept that because, implicitly, their protection was guaranteed by the state,“ said Mr. Vermeren, who teaches at the University Paris 1 Panthéon-Sorbonne.

Critics blame France’s poor showing, at least in part, on the excessive centralization of the French state, embodied by a president, Emmanuel Macron, who has spoken of his belief in the “top-down” exercise of power and has employed martial language in describing the fight against the virus.

Like many leaders, Mr. Macron initially derived a boost from the crisis, but that has begun to fade. Nearly 60 per cent of respondents described him as a “bad president” in one recent poll, while another poll showed confidence in the government’s management of the crisis declining steadily to 39 per cent from 55 per cent in the past month.

In keeping with his reputation for aloofness and heavy-handedness, Mr. Macron initially angered many French by harshly blaming them for not respecting physical-distancing measures during the same weekend last month that he allowed local elections to be held – a decision widely condemned since then.

He is also held responsible for the government’s flip-flopping messages on masks, which many French now perceive as a deception to cover up a blunder by the state, which allowed its stockpiles to decline.

Still, there is no doubt that the French state has been better equipped than most on many levels.

France’s traditionally strong health care system has succeeded in treating the sick and avoiding the kind of triage seen in Italy. The government mobilized high-speed trains to transfer hundreds of patients to relieve overwhelmed regional hospitals. It spent tens of billions of euros to support businesses and workers, softening the crippling effects of the lockdown.

But challenges, such as that from Sceaux, population 20,000, to the authority of the state have been met with a stiff rebuke, regardless of the shifting understanding of the virus.

France’s Interior Minister quickly condemned Sceaux’s mask ordinance as a threat to “fundamental freedoms,” and the Council of State, the country’s highest administrative court, overturned it. The city of Nice, which was about to make masks mandatory, backed down.

Critics say the French state’s shutting down of any challenges was a sign of weakness by a government left in a defensive crouch after it failed to quickly grasp the threat.

Even after the coronavirus had raged through Asian countries, Mr. Macron and his wife, Brigitte, made a point March 6 of attending the theatre to encourage people to keep going out despite the pandemic. Eleven days later, when Mr. Macron imposed the nationwide lockdown, the virus was out of control in France, too.

In a recent interview with Le Point, Mr. Macron acknowledged that France became aware of the pandemic in China at the beginning of January. By Jan. 24, the first cases of COVID-19 were recorded in France.

In Asia, countries close to the epicentre of the pandemic in China, such as Taiwan and South Korea, reacted quickly with contact tracing and testing, limiting official deaths to six and 246, respectively.

Despite the extra time afforded by geography, France’s enduring vision of itself as a “great power” prevented it from seeking pointers in Asian countries’ nimble response, said Jean-Jacques Roche, a specialist on French foreign policy at the University Paris 2 Panthéon-Assas.

In a written reply, Mr. Philippe’s office said that the “French state was on alert very early on,” adding that hospitals and health associations were warned of the pandemic by mid-January.

The collective failure by some of the West’s leading countries to respond quickly and effectively to the virus has left experts elsewhere in the world bewildered.

“Contact tracing and isolation are the basics of a response to any epidemic,“ said Mosoka Fallah, a Liberian epidemiologist who is managing the response to the coronavirus in his country and led contact tracing efforts there during the 2014 Ebola outbreak. “I’m really surprised that they didn’t do that.”

But France was – it has become clearer over the weeks – desperately short of both masks and test kits. In late February, France had the capacity to carry out only 3,000 tests a week. Even today, the weekly number of tests in France, 175,000, is a fraction of the 840,000 tests carried out weekly in Germany.

In the first weeks of the pandemic, the French authorities tracked and tested the infected in two small clusters. But they quickly ran out of capacity when a major outbreak occurred in mid-February after a large gathering at an evangelical church in the Grand Est in eastern France, the second-most affected region after Paris.

After the gathering, the church’s congregation of 2,000 worshippers spread the virus across the country before the authorities realized the scale of the contamination, said Jean Rottner, the president of the Grand Est region and an emergency physician. By then, he said, “it was pointless” to try to track the people who had attended the gathering.

But in South Korea, where the first major outbreak also originated in a church, health officials did just that – quickly imposing emergency measures and retracing worshippers’ movements. Those efforts stemmed the contamination.

The French government, having failed at that, imposed some of the world’s tightest lockdown restrictions, confining 67 million to their homes and deploying security forces to keep people off the streets.

“It’s not only medieval, but we’ve never experienced this in our history,” said Mr. Vermeren, the historian, adding that past pandemics had put French cities under quarantine but never confined an entire population to their homes.

As infections and deaths rose exponentially after the start of the lockdown – forcing Mr. Macron to extend it to two months – several regions in France ordered millions of masks, mainly from China. By that time, though, they were engaging in a worldwide competition for supplies that at times pitted them against their own government.

As France prepares to open up starting May 11, some regions, feeling bitten, are hedging their bets.

Mr. Rottner, the president of the Grand Est, said that he was already ordering millions of test kits. He said he didn’t want to “make the same mistake again.” 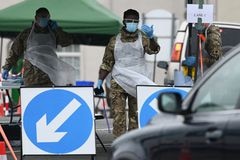