The Shetland Islands are best known for their ponies, wool and stunning vistas. But the windswept archipelago has also become a hotbed of discontent, and there’s a movement afoot to break away from Scotland.

Last week the Shetland Islands Council voted overwhelmingly to explore options for “financial and political self-determination.” The council said the islands' reliance on Scotland was “seriously threatening the prosperity, and even basic sustainability, of Shetland as a community.”

“It’s just a recognition that as the years have gone past what we’re seeing in Shetland is the decision-making is increasingly happening in Holyrood [the Scottish Parliament],” lead councillor Steven Coutts said in an interview. “Ultimately what we are looking for is a local parliament, the ability to make decisions locally.”

The Shetland Islands have been under Scottish control since 1468, when they were given up by King Christian I of Denmark, Norway and Sweden as part of the dowry for the marriage of his daughter to the King of Scotland, James III. But Shetlanders have kept their distinct Norse culture, which stems from their roots as a Viking settlement 160 kilometres off the northeast coast of Scotland. They’ve also developed a thriving economy thanks to healthy fish stocks and their proximity to North Sea oil.

As a result, many of Shetland’s 23,000 inhabitants have never felt entirely at home in Scotland or Britain. That alienation has fostered resentment over the years as regional funding from Edinburgh decreased and revenues from North Sea oil flowed south. The last straw for many councillors was the pandemic and, more specifically, Shetland’s inability to formulate its own response to the crisis.

“Clearly we have some significant advantages [in] being an island community, but ultimately what we saw in terms of COVID-19 restrictions, and the response, was that it was all determined by national governments without input or any measure of local decision-making,” Mr. Coutts said. “So I think that’s brought [self-government] back into sharp focus.”

There’s more than a little irony in the fact that Shetland’s push for self-determination comes as Scottish nationalists renew their drive for independence. Scottish First Minister Nicola Sturgeon, who leads the Scottish National Party, has indicated that she wants to hold a second referendum on sovereignty as early as next spring. In 2014, 55 per cent of Scottish voters chose to remain in the U.K., with support for the union even higher in Shetland, at 64 per cent.

Shetland’s departure would be more than a political embarrassment for Ms. Sturgeon; it would also deal a blow to the economy of an independent Scotland. The islands are home to one of Europe’s largest oil terminals – which transfers crude from North Sea rigs to tankers – as well as a major natural gas plant. The construction of Britain’s biggest onshore wind farm is also under way. According to a study done for the islands council in 2011, Shetland was sending about £82-million ($140-million) more in revenue every year to Edinburgh than the islands were getting back in funding for local services. The council argues that gap has widened considerably since then.

Mr. Coutts insists the Shetland council’s motion is not a move to head off a Scottish referendum, but rather an attempt to keep more control over local resources. If Scotland votes to leave the U.K., Mr. Coutts said, Shetland’s council “will assess the situation there and decide what’s best for Shetland.”

Shetland Islands and Orkney seeking to 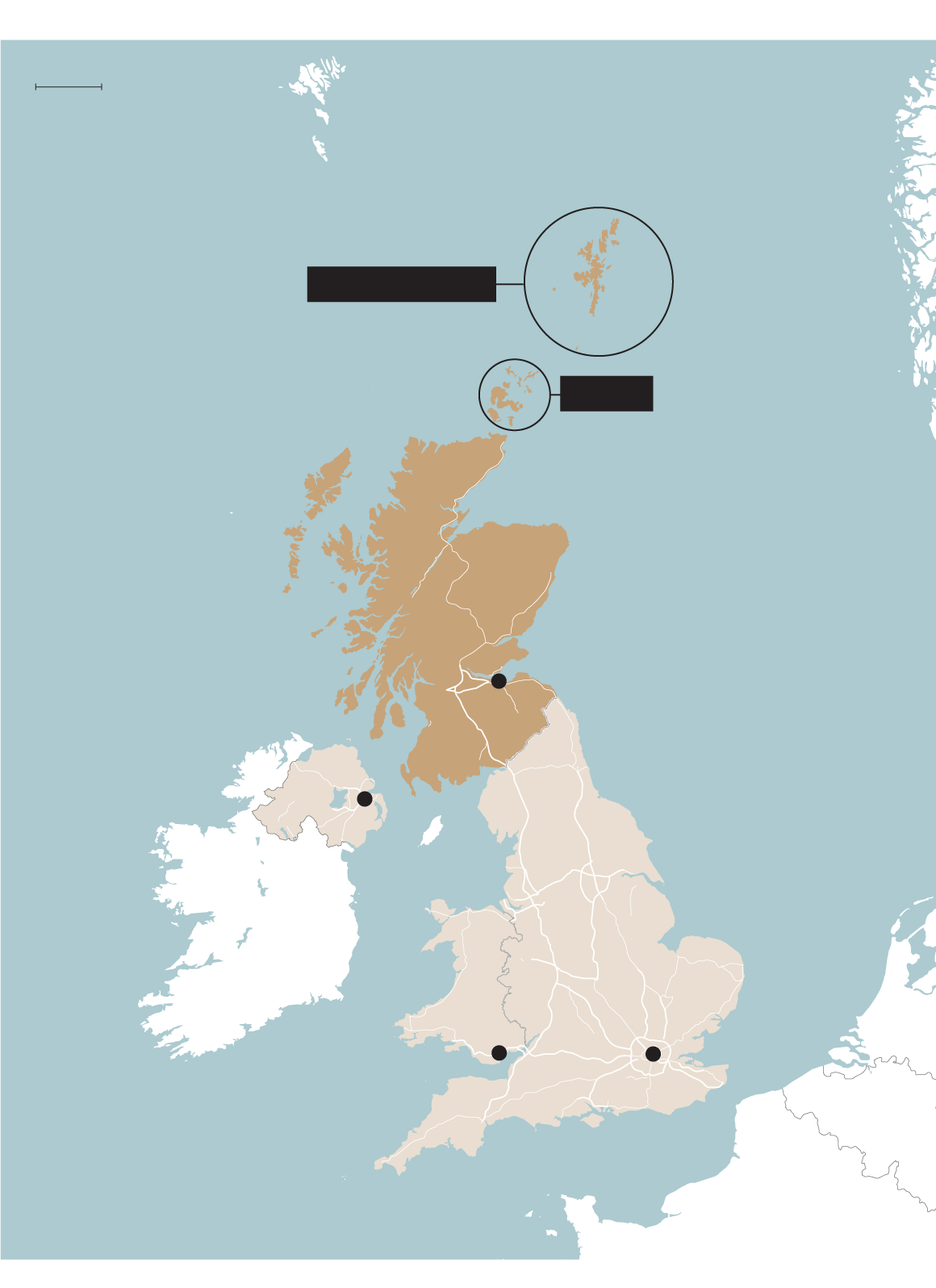 Shetland Islands and Orkney seeking to break free from Scotland

For now, he said, the council plans to explore various options for self-government and hold its own referendum. One of the leading examples is the nearby Faroe Islands. They are part of Denmark but run almost all their own affairs and negotiate international trade deals. Faroe has also stayed outside the European Union even though Denmark is an EU member. Shetland could also become a Crown dependency like Guernsey, Jersey and the Isle of Man. Those islands are not part of Britain and have their own governments and legal systems. Westminster is responsible for their defence and foreign relations, and Britain has an obligation to ensure their administrations run properly.

This isn’t the first time Shetland has agitated for more autonomy. In 1979, the islands voted against the establishment of the Scottish assembly, fearing it would undermine local authority, and the council explored the idea of becoming an independent state when the assembly was created. A political party, the Shetland Movement, kept those ambitions alive in the 1980s and 1990s but eventually petered out. The movement was briefly revived as Wir Shetland after the 2014 referendum but again floundered.

“Although the issue is not new, it does seem to have crept back from out of nowhere,” said Mathew Nicolson, a PhD student at the University of Edinburgh who lives in Shetland and studies island politics. Mr. Nicolson isn’t convinced there’s a groundswell of public support for self-government and can’t see it happening any time soon. “I think it’s something that maybe Shetland could move toward gradually. I don’t think it’s very likely in the near future,” he said.

The Scottish and British governments have also given the notion short shrift. The British government said it had no plans to “change the current devolution settlement,” and Scotland’s Islands Minister, Paul Wheelhouse, said legislation adopted in 2018 already put more focus on the islands' needs. “No additional-powers requests have been submitted thus far,” he added.

Shetland has received support from its neighbours in Orkney. That chain of islands has also griped about its relationship with Scotland, and its council supports Shetland’s move. “We’ve always seen ourselves as a bit different,” said James Stockan, who leads the Orkney Islands Council, which is also considering options for self-government.

Mr. Stockan’s family dates back to the Viking era, and he would love to see Orkney and Shetland govern themselves one day. When asked about the likelihood of that happening, he replied: “That is in the hands of God. It depends what He wants. We can only ask the questions.”