It is a made-for-New York brawl between two Democrats, pitting the state’s famous governor against an even more famous actress who says he is not progressive enough.

Cynthia Nixon, best known for playing the character Miranda on the television series Sex and the City, launched her campaign this week to unseat Andrew Cuomo with promises to fix New York’s dilapidated subways and help struggling public schools.

Her bid to defeat Mr. Cuomo in the Democratic primary is a long shot. But it reflects a deep discontent in the left-leaning wing of the Democratic Party, where voters feel that establishment candidates have failed to address issues such as income inequality.

Ms. Nixon is one of several underdog candidates who are challenging mainstream Democrats from within their own party, including in races for the U.S. Senate in California, the governor’s office in Michigan and congressional districts from Illinois to Texas.

I love New York, and today I'm announcing my candidacy for governor. Join us: https://t.co/9DwsxWW8xX pic.twitter.com/kYTvx6GZiD

The first year of President Donald Trump’s administration has energized Democratic voters and prompted a wave of first-time candidates – many of them women – to run against Republicans in November’s midterm elections. In some cases, that has produced crowded Democratic primaries, with candidates jockeying to prove their anti-Trump and progressive credentials.

For many of Ms. Nixon’s supporters, her campaign “is going to be a fight to reshape what it means to be a Democrat in New York and nationally,” said Basil Smikle, the former executive director of the New York State Democratic Party.

At the kickoff event for her campaign on Tuesday, Ms. Nixon laced into Mr. Cuomo, a two-term governor. “We are tired of fake corporate Democrats who won’t lift a finger unless their donors say it’s okay,” said Ms. Nixon, speaking in a church auditorium in one of the poorest neighbourhoods in Brooklyn. Mr. Cuomo’s time in office has been “an exercise in living with disappointment, dysfunction and dishonesty.”

Mr. Cuomo, 60, is sitting on a US$30-million war chest for his campaign and benefits from the support of traditional Democratic organizations, including labour unions. During the campaign, he can point to a slate of accomplishments such as the introduction of a US$15 minimum wage, the launch of paid parental leave in the state and the passage of gun restrictions. “I’m not nervous about whoever runs,” Mr. Cuomo said last week. “There’ll be people who run. That’s called elections, and that’s fine.”

At the same time, Mr. Cuomo – who is widely believed to harbour presidential ambitions – is dealing with problems of his own. He came to the state capital of Albany pledging to clean up its reputation for sleaze but later shut down a commission investigating public corruption. Earlier this month, a man who was formerly one of his closest aides was convicted of bribery-related crimes. (Mr. Cuomo has not been accused of any wrongdoing.)

The contest between Mr. Cuomo and Ms. Nixon comes with a healthy dose of local intrigue. Mr. Cuomo has a famously frosty relationship with Bill de Blasio, New York’s mayor. Although the two men are both Democrats and once were close, they have feuded behind the scenes for years. Ms. Nixon, 51, is an ally of New York’s mayor and is employing some of the same strategists who once helped Mr. de Blasio.

In a taste of what could prove to be a bitter and personal campaign, Christine Quinn, the former speaker of the city council who backs Mr. Cuomo, described Ms. Nixon on Tuesday an “unqualified lesbian” who was engaging in a “flight of fancy.” Ms. Quinn, who is also gay, described herself as a “qualified lesbian” whom Ms. Nixon failed to endorse as mayor back in 2013.

Ms. Nixon is a native New Yorker, the mother of three children and a long-time advocate for education issues. At Tuesday’s event in Brooklyn, Zakiyah Ansari, 51, described how she had worked with Ms. Nixon for years, travelling together to Albany to push for resources for students. Ms. Nixon has used “her celebrity to elevate the voices of black and brown parents,” said Ms. Ansari, while Mr. Cuomo “has been screwing over our kids.”

The prospects of Ms. Nixon beating Mr. Cuomo are very slim, experts said. George Arzt, a Democratic political consultant, said that Ms. Nixon’s name recognition may allow her to do better than the last candidate to challenge the governor in the party’s primary in 2014. “But I don’t think this is going to be a close race,” said Mr. Arzt.

Still, Ms. Nixon is tapping into real dissatisfaction, he added. “There’s no doubt that the progressive wing, sort of prodded on by [Senator Bernie] Sanders and [Senator Elizabeth] Warren, yearns for its candidates.” 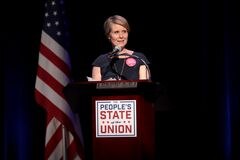