American advocates calling for supervised injection sites as a life-saving measure to prevent overdose deaths have been forced to rely on data from Canada and elsewhere to show that the sites are a valid public health intervention – until now.

New data, released Monday at a major international harm reduction conference in Porto, Portugal, provide the first look at a supervised injection site (SIS) situated on American soil. The research involves data collected from the U.S. site – a secret, illegal one as such sites are not permitted under U.S. law.

“What I can tell you is the results from the first four-and-a-half years in an undisclosed location, [operated] by an undisclosed agency,” said Barrot Lambdin, a senior epidemiologist with RTI International, a non-governmental organization based in North Carolina.

Dr. Lambdin presented results of the study at HR19, the world’s largest conference of harm reduction advocates – physicians, parliamentarians, drug users, front-line workers and others seeking a range of policies to reduce harms associated with the use of illicit drugs such as heroin or cocaine.

“Nearly 8,400 public injections were prevented. These would be injections that would [otherwise] occur in parks, streets, bathrooms of business, et cetera,” Dr. Lambdin said.

Although small and secret, the SIS has overseen 9,000 injections for about 540 people since opening in September, 2014. The site operates by invitation only, and is open five or six days a week for eight to 10 hours a day. The limited operation is a necessary result of its illegal nature, and is a weakness in assessing its potential reach.

“What we also know,” said Dr. Lambdin, “is that 85 per cent of people [injecting in unsupervised settings] rush their shot.” This leads to easier overdose as well as the spread of infectious diseases, and development of abscesses avoidable through better and less hasty injection technique.

Over the period of the study, 26 overdose events were reversed by site staff using naloxone, an opioid antagonist that temporarily blocks the effects of opioids. There were no fatalities. By contrast, elsewhere in the United States 70,000 people died of drug overdose in 2017, with 68 per cent of those deaths involving an opioid.

Similar sites have been proposed in New York, Seattle, San Francisco, Boston, Denver and other cities, but this is the first to actually operate in the United States. When North America’s first SIS, Insite, opened in Vancouver’s Downtown Eastside in 2003, it was a desperate experiment in keeping people alive. Since then, government health officials from around the world have toured the site, which contributed to a dramatic drop in transmission of infectious diseases such as HIV and hepatitis C.

A Supreme Court ruling in 2011 affirmed that former federal health minister Tony Clement’s multiple attempts to close the site went against the Charter of Rights and Freedoms by threatening drug users’ lives and safety. Since 2003, 3.6 million injections have taken place at Insite, with 6,440 overdoses but zero deaths. In Canada, numerous SIS and supervised drug-use sites (where illicitly acquired drugs may also be consumed, snorted or sometime smoked, thus reaching a wider population of vulnerable users) have been established since.

The U.S. Justice Department under President Donald Trump has strongly opposed establishment of American supervised injection sites following the same model. In February, prosecutors filed a lawsuit to prevent such a sanctioned site from opening in Philadelphia, which has one of the highest fatal overdose rates of any large U.S. city.

The American research team at the unsanctioned site has been able to observe changes in the opioid overdose epidemic since starting up. These include a rapidly increasing overdose rate – from one overdose for every 1,000 injections to six. This could relate to the increasing presence of fentanyl in the illicit opioid supply, or even stronger unknown-dose opioids like carfentanil.

“For every 165 injections there is an overdose,” Dr. Lambdin explained. “That’s a massive overdose rate that requires a massive effort in the community.”

The increasing overdose rate at the unsanctioned site could also be related to increased multiple-drug use.

“When the site first started, people were more reporting opioid use on its own, more frequently. Now it’s more of a mixture with meth and cocaine, et cetera. People often mix, maybe to stay awake,” Dr. Lambdin reported. This, like the rising overdose rate, is a trend also seen at legal sites in Canada, and on the street.

To date, no one in the world has died in a supervised injection site. The facilities also offer a linkage point to voluntary addiction treatment, primary health care and information about disease prevention, safer sex and other health issues.

“My hope as a scientist is that we can really try them in the U.S., that we could perhaps pilot a larger scale operation that we can pilot and evaluate,” Dr. Lambdin said. “We’re seeing data from the site that is very positive.”

Harm Reduction International’s 26th conference this week gathered over 1,200 people, including Michelle Bachelet, United Nations High Commissioner for Human Rights, Jorge Fernando Branco de Sampaio, the former president of Portugal who oversaw the development of Portugal’s unique policy of decriminalization and harm reduction, and architects of that policy. The event involved four days of research presentations and strategizing on ways to advance global drug policy that provides support rather than punishment for people who use drugs, and that shifts national drug policy budget lines from law enforcement to health care. The last conference was held in Montreal in 2017.

How drug decriminalization could help stem an epidemic of drug overdoses
May 26, 2019 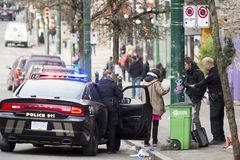 No 'tent in an alleyway’: The fight for Atlantic Canada’s first supervised drug-use site
April 23, 2019 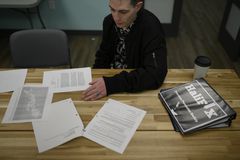 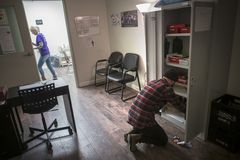