Desperate residents stranded on rooftops amid swirling currents. Rescue efforts stalled by flooded vehicles and roads turned to rivers. Communications in ruins and basic infrastructure – including shelters, hospitals and public buildings – under water.

And all around, vicious winds and crashing waves brought on by Hurricane Dorian, one of the most powerful storms recorded in the Atlantic, continued to whip the low-lying islands of the northwestern Bahamas for a second day.

“It’s not just the power and ferocity of the storm, it’s also the length of time it spent over Abaco and Grand Bahama." “That’s a disastrous outcome.”

Seven people have died, Prime Minister Hubert Minnis said at an evening news conference, although the toll may yet climb. Children were among those killed, Mr. Dames had said earlier.

Hurricane Dorian first made landfall in the Bahamas as a Category 5 storm Sunday, but then it lingered, pummeling the low-lying Grand Bahama and Abaco Islands, blocking even a basic accounting of the number of victims and the destruction. The true extent of its toll is only beginning to emerge as the storm began to pull away.

Cindy Russell, a resident of Marsh Harbour whose home was destroyed, said she had no words to describe what Dorian left in its wake.

“It’s like we just need to be rescued and put on another island to start over again,” she said. “Complete devastation.”

Although the hurricane, now a Category 2, was pushing its way toward Florida, it was not expected to clear the islands well into the evening Tuesday.

A video from a helicopter flyover showed entire neighborhoods reduced to unrecognizable fields of rubble, houses crushed into splinters and boats tossed into heaps like toys. About 60 per cent of the land is under water, satellite company Iceye said Monday. That includes the airport. All around, massive waves curled toward the island, delivering new blows.

“Storm surge is the No. 1 killer in a tropical storm,” said Dennis Feltgen, a meteorologist at the National Hurricane Center in Miami, speaking of the rising of the sea that results from the wind and pressure changes brought on by a storm.

In Freeport, the largest city on Grand Bahama, Sarah Kirkby watched helpless as a massive tidal flood poured in and inundated her house.

“It was absolutely terrifying,” she said. “I have never seen water come in like that. You don’t realize the power until you’re in it.”

Some local rescue efforts began Tuesday, she said, as the water began to recede, with neighbors manning Jet Skis to rescue people trapped on their roofs – but it was unclear where they might go, since many shelters were also flooded or damaged by the storm.

There was so much water that government offices, including the government radio station, had to leave the lower floors.

The islands in the northwestern Bahamas that were hit the hardest – the Abaco Islands and Grand Bahama – are nine metres at their highest point and the storm surge reached up to seven metres, not counting the waves, said Joel Cline, the tropical program co-ordinator at NOAA.

Photographs from flights over the island show trees sheared of limbs and leaves and saltwater ponds covering swaths of land where homes once stood. Some houses had their roofs ripped completely off, while others were reduced to piles of debris mired in water. All around, a rough ocean lapped at the low-lying islands.

On the Abaco Islands, east of Grand Bahama, officials believe whole towns have been wiped out. The area, whose population includes Haitian migrants living in shantytowns such as the Mudd and Pigeon Peas, is especially vulnerable.

Caribbean disaster response managers say that they may not be able to get any firsthand information out of the islands until Wednesday.

The Bahamas are no stranger to hurricanes. But Dorian, with sustained wind speeds of 298 kilometres an hour, ranks as one of the strongest to ever make landfall, tied with the 1935 Labor Day hurricane.

The powerful storm’s sluggish pace – it crawled over the island at about 2 km/h from Monday afternoon to Tuesday morning – ensured steady, brutal destruction, with harrowing images of residents among the ruins of their homes surfacing on social media.

On Tuesday, many residents faced the terrifying choice between staying in their rapidly flooding homes or plunging into the volatile waters to seek shelter.

Tim Aylen, a Grand Bahama resident, waded through chest-deep storm surges with his wife and young son, spurred on by fear and horror. He barely had time to make the decision to flee.

“You open the door and the water’s just pouring in,” he said. “You think, ‘No, that’s going to flood the house.'"

In that frantic moment, he made the call to leave the house, rather than flee to the attic. With their belongings in bags, his family and their three dogs forded the rushing water.

“We have experienced a lot of hurricanes in our time, but nothing like this,” he said.

Hurricane Dorian, as of Tuesday, Sept. 3

MURAT YUKSELIR / THE GLOBE AND MAIL,

Hurricane Dorian, as of Tuesday, Sept. 3

MURAT YUKSELIR / THE GLOBE AND MAIL, 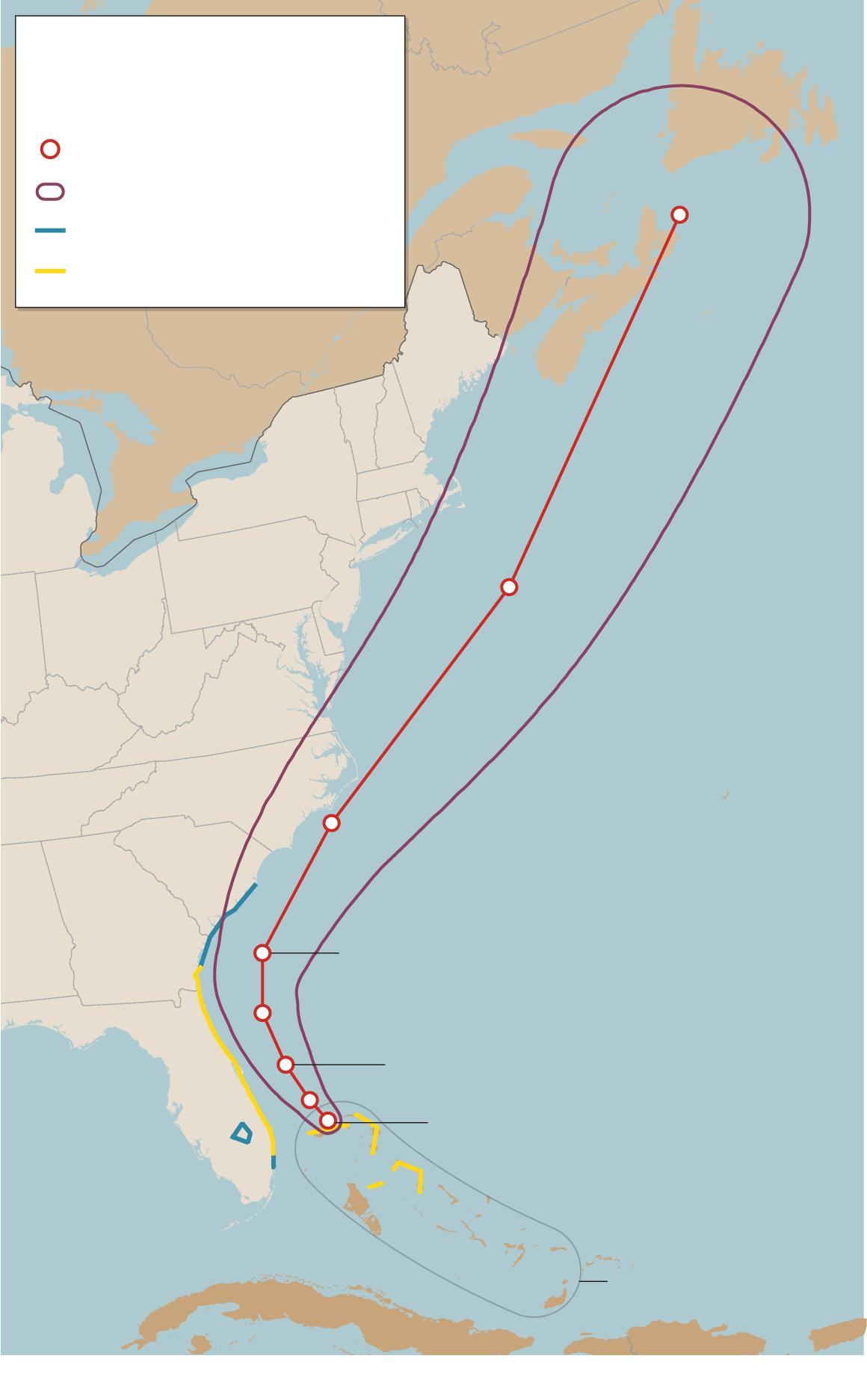