Thousands of people took to the streets of Minsk and other Belarusian cities on Friday, after a 31-year-old anti-government protester died in hospital following what demonstrators said was a severe beating by security forces.

Witnesses said Roman Bondarenko was detained after scuffling with people in plain clothes who had come to a playground to remove red-and-white ribbons representing a months-long protest movement against President Alexander Lukashenko.

The interior ministry denied responsibility for Mr. Bondarenko’s death, saying he had been killed in a scuffle with civilians.

The state Investigative Committee alleged Mr. Bondarenko had been drunk. Local media reports contradicted this, citing the official medical report into his death that they said showed he had no alcohol in his bloodstream.

The death on Thursday was the latest flashpoint in months of mass protests against Mr. Lukashenko following a disputed presidential election in August. The opposition says Mr. Lukashenko rigged the vote to secure a sixth successive term.

However, having previously promised to stay the course for a full term, on Friday he said he would announce the terms and conditions for his resignation at a special assembly next year.

“I will just leave this post when I need to,” he said in televised comments. “Under no circumstances will we go abandon people and leave. I’m not going to run anywhere.”

He offered his condolences to Mr. Bondarenko’s family.

“We need to investigate everything honestly and objectively,” said Mr. Lukashenko, a 66-year-old former Soviet collective farm manager who came to power in 1994.

A violent crackdown after the election prompted a new round of Western sanctions on Minsk.

The European Union in a statement from its foreign policy department called Mr. Bondarenko’s death “an outrageous and shameful result of the actions by the Belarusian authorities” who had “directly and violently carried out repression of their own population.”

The bloc, which has blacklisted some Belarusian officials, threatened further sanctions.

Rupert Colville, spokesman for the United Nations High Commissioner for Human Rights, called for a “thorough, transparent and independent investigation.”

Videos posted by Belarusian media on Friday showed people standing along roads, near universities, factories and hospitals with red-and-white flags in their hands and portraits of Mr. Bondarenko.

In a video from the courtyard where Mr. Bondarenko was detained, hundreds of people stood in a minute of silence and then chanted: “We will not forget, we will not forgive.” Large piles of flowers were laid at the site.

“It’s impossible to bear, what they did. Everybody is crying here,” said a participant in one of the human solidarity chains in Minsk.

Hundreds gathered near the Catholic Cathedral of the Holy Name of Mary in Minsk, where a service was held for Mr. Bondarenko.

The news outlet Nasha Niva reported that police had detained protesters in at least four towns.

Sviatlana Tsikhanouskaya, Mr. Lukashenko’s main opponent, who fled into exile in Lithuania after the election, announced the creation of a “People’s Tribunal” and an amnesty for anyone who managed to capture Mr. Lukashenko or his associates.

“Our country has finally turned into a crime scene. I declare that Alexander Lukashenko and his accomplices are a terrorist organization that must answer for their crimes,” she said in a statement. 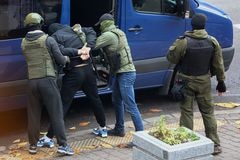 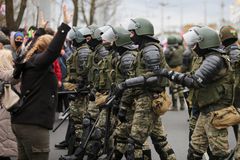 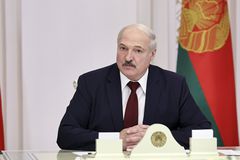