As street protests stretched into a second day in Iranian cities on Sunday, authorities were reported to be throttling internet access to suppress news of the angry demonstrations against the Iranian military shootdown of a Ukrainian passenger jet with 176 people on board, including 82 Iranians and 57 Canadians.

The shutdown of much of Iran’s internet access, documented on Sunday by internet researchers and social-media users, was the latest sign of the Iranian government’s growing fear of escalating public outrage over the disastrous military decision to attack the passenger jet.

In defiance of a massive police presence, thousands of protesters have marched through Tehran and other cities for the past two days, accusing Iran’s top leaders of being murderers and liars for covering up the military’s role in the shootdown of the airplane.

Many U.S. officials, including President Donald Trump, encouraged the Iranian protests in tweets and other public statements during the weekend, although it was unclear if the U.S. statements would have any influence, since Iranians were equally outraged at the U.S. assassination of Iranian military commander General Qassem Soleimani earlier this month.

The protesters in Tehran and other cities were angered that the government failed to shut down Iran’s civilian air space and airports last Wednesday, when the military was on high alert for possible incursions by U.S. warplanes. Instead, the Ukrainian plane was allowed to take off from Tehran’s airport, followed by its shootdown just minutes later.

The protesters are also upset that the government lied about the cause of the crash for three days, calling it an accident until it finally reversed itself on Saturday and admitted the truth.

“Death to the liars,” the protesters shouted, according to videos and other reports posted on social media. “Dishonourable! Resignation is not enough!”

They expressed outrage that the Iranian military had carefully avoided any U.S. casualties in its missile attacks on Iraqi military bases where U.S. troops were located, while recklessly shooting down a civilian airplane with Iranians on board.

Bessma Momani, a political scientist and Middle East expert at the University of Waterloo, said the protests are unusual because of their presence in Tehran, as well as other cities. “We’re seeing far more of the middle class in these protests,” she told The Globe and Mail in an interview on Sunday.

“These are big protests for Tehran,” she said. “There is even, within the internal core [of the political system], enormous frustration and an unprecedented opposition to the regime.”

But the Iranian regime is too institutionalized and embedded in every part of society to be easily toppled by the protests, she cautioned. There is no indication that the balance of power has reached a tipping point, she said.

Many of the protesters were university students, who gathered near Iranian university gates, reflecting the fact that many of the passengers on the Ukrainian jet were students from Iran and Canada.

On Saturday, Iranian security forces responded with tear gas and water cannons to disperse the protesters. They also arrested British Ambassador Rob Macaire at one of the demonstrations, but released him shortly afterward.

The arrest sparked international criticism, including statements of protest by Canada, the United States, Britain and many European countries. Britain called it “a flagrant violation” of international law. Canada said it was “deeply concerned” by the arrest.

Mr. Macaire, in a tweet later, said he had been paying his respects for the plane-crash victims at a vigil, not a demonstration, and left the event as soon as chanting began. The Iranian government, for its part, said he was detained because he was an “unknown foreigner in an illegal gathering” and was released when authorities realized who he was.

The street protests are the latest sign of rising discontent with the Iranian government. Just two months ago, thousands of protesters took to the streets to demonstrate against soaring inflation, economic problems and government corruption. Police and security forces killed hundreds of protesters, possibly as many as 1,500 by some estimates, but the protesters on Saturday and Sunday were undeterred by the risk of another crackdown.

Parliamentary elections are scheduled for next month in Iran, and the continuing protests could be a foreshadowing of setbacks for the government in those elections.

Until the airplane shootdown, Iran had been following a careful strategy of calibrating its response to the U.S. drone strike that killed Gen. Soleimani. Although it retaliated by firing missiles at military bases in Iraq where U.S. troops were based, Iran gave advance warning of the missile strikes, allowing the troops to avoid any casualties.

But the shootdown of the Ukrainian airplane has inflicted heavy damage on Iran’s political strategy and its efforts to gain international support. Paul Ziemiak, a top leader of one of Germany’s biggest political parties, the Christian Democratic Union, told a German newspaper on Friday that sanctions should be imposed on Iran in response to the airplane attack. In another potential threat to Iran’s economy, many global airlines are now avoiding Iranian airspace and airports. 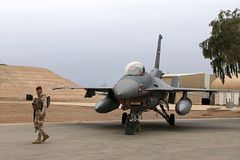 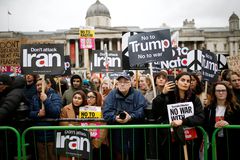 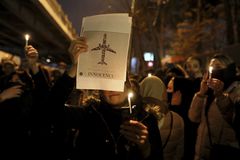