Ethiopia’s military on Thursday said it was responsible for a deadly air strike on a busy marketplace in the country’s Tigray region. Health workers said the attack killed at least 64 people, including children, but the military insisted only combatants were targeted.

A doctor who managed to reach the market in Togoga village after Ethiopian soldiers blocked medical teams from responding to Tuesday’s attack described a “horrible” scene of badly wounded people lying on the ground, crying in pain with no medical care.

“It was very traumatizing,” he told The Associated Press. “I think most of the patients, they died because we were late there, because care wasn’t available.”

Most of the patients taken to regional hospitals weren’t critical, he said: “The critical patients were already dead.” Like others, he spoke on condition of anonymity for fear of retaliation.

“The Ethiopian air force uses the latest technology, so it conducted a precision strike that was successful,” he said.

But the doctor who reached the scene said “most of the patients we found were mothers, children and elderly fathers. There were few young men.”

The air strike wounded more than 100 people, half of them seriously, a regional health official said. Health workers said Ethiopian forces blocked medical teams from responding and shot at a Red Cross ambulance trying to reach the scene.

Bodies were still being pulled from the rubble and dozens of survivors were still arriving at regional hospitals with shrapnel and blunt trauma wounds two days after the air strike, said a doctor in the regional capital, Mekele. The International Committee of the Red Cross called the transport of seriously injured to Mekele “a matter of life and death.”

Even on Thursday, United Nations spokesman Stephane Dujarric told reporters that the U.N. still hasn’t been able to reach the scene. “Between the fighting and different groups on the ground we need clearance to go and we’ve just not been able to get it,” he said.

The air strike, one of the worst massacres of the war, came amid some of the fiercest fighting in Tigray since the conflict began in November as Ethiopian forces, supported by neighbouring Eritrea, pursue Tigray’s former leaders.

The Ethiopian military spokesman denied Tigray fighters’ claims of gains in recent days, saying Ethiopian forces had been deployed to other locations for Monday’s national election.

The United States and the European Union have condemned the air strike in Togoga that left children, including a 1-year-old baby. screaming in pain.

A “reprehensible act,” the U.S. State Department said. “Denying victims urgently needed medical care is heinous and absolutely unacceptable. We urge the Ethiopian authorities to ensure full and unhindered medical access to the victims immediately. We also call for an urgent and independent investigation.”

The U.S. also called for an immediate cease-fire in Tigray, where thousands of civilians have been killed and 350,000 people are now facing one of the world’s worst famines in years.

Ethiopia claims that aid is being delivered to most of Tigray’s 6 million people, but aid workers have said they have been repeatedly denied access to several parts of the region by soldiers.

With Ethiopia recently declaring Tigray’s former ruling party a terrorist group, concerns have been widespread among Tigrayans, aid workers and others that anyone seen as linked to Tigray fighters, including civilians, could be targeted.

Tigrayans were appalled by Ethiopia’s assertion that the air strike was aimed only at combatants.

“It’s an insult to the people and adding salt to the wounds, you know?” said Hailu Kebede, a former Togoga resident and official with the Salsay Woyane Tigray opposition party. He described how his brother, who has a shop in the market, ran for his life while his nearby home was destroyed.

“We know the area. I grew up there. There were no combatants,” Hailu said. “The destroyed homes are those of my friends and my family.”

One of his friends lost a child in the air strike while another child had her hand amputated, he said.

The real death toll from the air strike could be even higher because some people likely took the dead home to their nearby villages and buried them without telling regional officials, Hailu said. 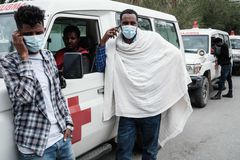 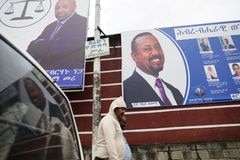