Emergency teams searched on Monday for more than 200 people listed as missing in the deadliest northern California wildfire on record as officials voiced concerns the casualty toll will climb higher and crews battled for a fifth day to suppress the flames.

At least 42 people have been killed, officials said late Monday.

The deadly Camp Fire also ranked as California’s most destructive ever in terms of property losses, having incinerated more than 7,000 homes and other buildings in the Sierra foothills of Butte County, about 280 kilometres north of San Francisco.

More than 15,000 more structures remained listed as threatened on Monday in an area so thick with smoke that visibility was reduced in some places to less than half a mile.

California wildfires: What we know so far and how you can help

The bulk of the devastation and loss of life occurred in and around the town of Paradise, where flames reduced most of the buildings to ash and charred rubble on Thursday night, just hours after the blaze erupted.

The 42 fatalities confirmed so far is the most ever from a single northern California wildfire – surpassing the 25 lives lost in the 1991 Oakland Hills firestorm – and ties the all-time statewide record set in 1933 by the Griffith Park blaze in Los Angeles.

Authorities reported two more people perished over the weekend in a separate blaze, dubbed the Woolsey Fire, that has destroyed 370 structures and displaced some 200,000 people in the mountains and foothills near Southern California’s Malibu coast, west of Los Angeles.

U.S. President Donald Trump on Monday approved a major disaster declaration for California at the request of Governor Jerry Brown, hastening the availability of federal emergency assistance to fire-stricken regions of the state.

The fires have spread with an erratic intensity that has strained resources and kept firefighters struggling to keep up with the flames while catching many residents by surprise.

The remains of some of the Camp Fire victims were found in burned-out vehicles that were overrun by walls of fire as evacuees tried to flee by car in panic, only to be trapped in deadly knots of traffic gridlock on Thursday night.

“It was very scary,” Mayor Jody Jones recounted of her family’s own harrowing escape from their home as fire raged all around them.

“It took a long time to get out. There was fire on both sides of the car. You could feel the heat coming in through the car,” she told CNN. Ms. Jones said her family is now living in their mobile home parked in a vacant lot.

Perilous winds that stoked the fire through drought-parched brush and chaparral abated on Saturday, giving firefighters a chance to gain some ground against the flames.

High winds returned on Sunday but diminished again Monday morning, with crews by Monday night managing to carve containment lines about 30 per cent of the Camp Fire perimeter, an area encompassing 45,729 hectares of scorched, smoldering terrain.

The Woolsey Fire has blackened more than 91,000 acres and was 20 percent contained as of Monday, according to the California Department of Forestry and Fire Protection (CalFire).

In the wake of the chaotic evacuations in and around Paradise, at least 228 people were listed as unaccounted for early on Monday, according to Butte County Sheriff Kory Honea.

Speaking on CNN, Honea held out hope many of the missing would turn up safe, but added: “Given what we’ve dealt with so far with casualties as a result of this fire, I have concerns that it (the death toll) will rise.”

Winds of up to 40 miles per hour (64 km per hour) were expected to continue in Southern California through Tuesday, heightening the risk of fresh blazes ignited by scattered embers, while winds were forecast to begin diminishing again in Butte County.

Taken together, the Camp Fire, the Woolsey Fire and a handful of smaller blazes in Southern California have displaced about a quarter-million people, CalFire said. About 8,000 firefighters were battling the flames, backed by squadrons of water-dropping helicopters and airplane tankers, including crews from out of state.

“These are extreme conditions. If there’s a fire in your neighborhood, don’t wait for an evacuation order, leave,” Los Angeles County Fire Department Chief Daryl Osby told a news conference.

Many of those allowed to return in Malibu, a seaside community that is home to many Hollywood celebrities, were left without power or cellphone service, even if their homes were spared by the flames.

Malibu resident Tony Haynes described how strong winds brought the fire through his neighborhood during the weekend, with the sky growing dark, saying there was so much smoke he put on his scuba-diving tank to breathe. Haynes said his home survived.

“It all came down to luck and a whole lot of buckets of water,” he told KTLA 5.

California has endured two of the worst wildfire seasons in its history over the past couple of years.

Forty-six people died in a flurry of wind-driven wildfires that swept northern California’s wine country in October of last year, destroying some 8,900 homes and other structures. The worst of those blazes, dubbed the Tubbs Fire, was blamed for 22 of the deaths. 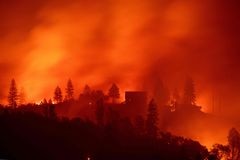 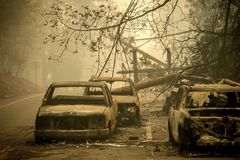