Colombian President Ivan Duque on Friday pressed Cuba to arrest 10 peace negotiators from the National Liberation Army after his government blamed the leftist group for a car bombing against a police academy that left 21 dead and dozens more wounded.

In a televised address, Duque said he had revoked a decree suspending arrest orders against leaders of Colombia’s last remaining rebel group, known as the ELN for its Spanish initials, who have been living on the communist-run island amid fading hopes that peace talks would resume.

“It’s clear to all of Colombia that the ELN has no true desire for peace,” Duque said, citing a long list of kidnappings and attacks attributed to the guerrillas since peace talks began in 2017.

“We would like to thank the Cuban government for the solidarity it expressed yesterday and today, and we ask that it capture the terrorists who are inside its territory and hand them over to Colombian police,” he said, adding that no ideology could justify the cruelty of Thursday’s attack.

Duque’s comments came after authorities claimed that a one-armed ELN explosives expert was the person who carried out the attack, the deadliest in the South American nation in 15 years.

Even though Jose Aldemar Rojas had no criminal record, authorities said that the 56-year-old man is the same individual who shows up in intelligence reports as alias Mocho Kiko and who is believed to have lost his arm manipulating explosives during a long clandestine career with an ELN cell near the border with Venezuela. He died in Thursday’s attack.

The shock bombing recalled some of the bloodiest chapters of Colombia’s recent past and has raised tough questions about lingering security threats in the wake of a 2016 peace deal with FARC rebels. It would also appear to torpedo any chance of stalled peace talks with the ELN resuming any time soon.

“The entire Colombian state,” chief prosecutor Nestor Martinez said, “is prepared to confront with the constitution and laws in our hands those who want to ambush our national security and impose the force of terrorism.”

Overnight, the death toll from the bombing more than doubled to 21, the worst tragedy since a 2003 car bombing carried out by FARC rebels against an elite Bogota social club that killed 36. It proved especially unsettling because the target, the General Santander school, is one of the city’s most protected installations.

With the help of security cameras and fingerprints on his one-remaining left hand, investigators were able to quickly identify Rojas and determine that he was the owner and driver of a 1993 Nissan-pick up that was loaded with 80 kilograms (175 pounds) of pentolite and rammed past a security checkpoint into the leafy campus.

Defence Minister Guillermo Botero said Rojas entered the heavily guarded facility via a side entrance used for deliveries, driving fast through a gate opened to allow the exit of a few motorcycles. He then drove into the heart of the school where the vehicle exploded in front of a red tile-roofed barrack used by female cadets just after an honour ceremony had concluded.

Martinez said that less than 10 minutes before the blast an unidentified man descended from the vehicle at a nearby bus stop – an indication the bomb may have been activated remotely and not a suicide bombing as some initially had speculated.

Investigators are now trying to determine whether that man is Ricardo Carvajal, who acknowledged taking part in the attack in phone calls intercepted by police. Carvajal was arrested in a pre-dawn raid in Bogota on Friday in which authorities also seized a rebel combatant manual.

“This was an operation being planned for more than 10 months,” Botero said.

Duque, visiting the academy in the aftermath of the blast, vowed to spare no effort in fighting the “miserable” terrorists who carried out the attack.

“Colombia will demonstrate that it is a strong state, united and won’t break in the face of the dementia of these aggressions,” he said in a televised address Thursday night in which he declared three days of mourning.

Police director Gen. Oscar Atehortua said just four of the deceased cadets have been fully identified because the bodies of many of the victims were badly mutilated. He asked family members to provide DNA samples to a team of forensic anthropologists trying to identify the dead from among a list of unaccounted-for cadets.

The dead identified thus far include Erika Chico, a top-of-class cadet from Ecuador who had identification on her at the time of the attack. Of the more than 70 wounded, including three students from Panama, 10 remain hospitalized.

Little is known about Rojas.

Records show he bought the car 10 months ago from Mauricio Mosquera, who Martinez said was charged in the past for terrorism and rebellion. The car was last inspected six months ago in the eastern city of Arauca, near the border with Venezuela.

The same volatile area is a stronghold of the ELN, which became the country’s last remaining rebel group following a 2016 accord between the government and the Revolutionary Armed Forces of Colombia that saw some 7,000 rebels disarm.

Authorities said Rojas, as a member of the hardliner Domingo Lain front, travelled on several occasions to Venezuela to train rebels in the use of explosives.

The ELN has been stepping up its attacks on police targets and oil infrastructure amid a standoff with the conservative Duque government over stalled peace talks. A year ago, the group claimed responsibility for the bombing of a police station in the coastal city of Barranquilla that left five officers dead.

But until now the Cuban revolution-inspired group, which is believed to have around 1,500 fighters, has never been capable or much interested in carrying out such a high-profile act of violence.

Duque in his address Friday stopped short of closing the door completely to a negotiated settlement to decades of warfare with the ELN. But he repeated his demand that the groups cease all attacks and kidnappings as a condition for restarting the talks.

He also vowed to condemn any government that provides safe haven to the group – an indirect shot at Venezuela, where much of the ELN leadership is believed to be hiding out.

At least 10 killed after car bombing at police academy in Colombia
January 17, 2019 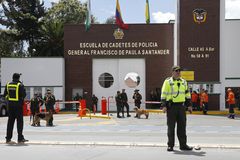