A tightening siege of the Tigray region of northern Ethiopia, backed by a campaign of air strikes, is inflicting a mounting death toll on an area that has already been ravaged by war for the past 14 months.

United Nations agencies warned this week that the air strikes have killed dozens of refugees and other civilians, and the World Health Organization has said a blockade on medical supplies in the region is worse than anything experienced in Syria or Yemen. Children are dying as a result of the blockade, doctors say.

The UN estimates that almost 90 per cent of Tigray’s six million people need emergency food aid, but no trucks carrying humanitarian supplies have been allowed to enter Tigray since Dec. 15. The rebellious region has been battling Ethiopian and Eritrean forces since November, 2020.

Three Eritrean refugees, including two children, were killed this week and four others were injured when an air strike hit the Mai Aini refugee camp in Tigray. Details of the air strike were unclear, but Ethiopia has the only aircraft in the region.

“Refugees are not and should never be a target,” said Filippo Grandi, the UN High Commissioner for Refugees, in a statement after the attack.

The UN office of humanitarian affairs said there were “mass civilian casualties” – including dozens of deaths – in a series of air strikes in Tigray in late December. One of the attacks hit a major electricity substation in Mekelle, the capital of Tigray, killing a firefighter and damaging electricity service in the region. It was “the most intense series of air attacks and casualties reported since October,” the UN said in a situation report.

In recent months, Ethiopia has received frequent shipments of armed drones from Turkey, Iran, China and the United Arab Emirates, according to independent experts monitoring cargo flights and airports.

The sophisticated drones have turned the tide in the war, forcing Tigrayan forces to retreat after they had advanced to within 200 kilometres of Addis Ababa, the Ethiopian capital. But there are widespread reports that the drones have also attacked civilian targets in Tigray.

A video posted online by Tigrayan media on Friday showed a civilian minibus that had reportedly been destroyed by an armed drone, killing 25 people, near the Tigrayan city of Axum. The video showed a massive dent and scorch marks on the roof of the minibus, suggesting that it had been hit by a missile from above.

For the victims of air strikes, hospital care in Tigray is increasingly difficult to access, because the blockade by Ethiopian authorities is halting shipments of medical supplies to the region.

WHO director-general Tedros Adhanom Ghebreyesus said the blockade is causing deaths in Tigray from shortages of medical aid. He added that his organization has not been permitted to send medical supplies into Tigray for the past six months, despite repeated requests.

“Even in the toughest periods of conflict in Syria, South Sudan, Yemen and others, WHO and partners have had access to save lives,” Dr. Tedros told a briefing on Thursday. “However, in Tigray the de facto blockade is preventing access to humanitarian supplies, which is killing people.”

At the largest hospital in Tigray region, Ayder Referral Hospital in Mekelle, patients are dying from a lack of oxygen and essential medicine as a result of the blockade, according to a statement published on Tuesday by its doctors and other health staff. 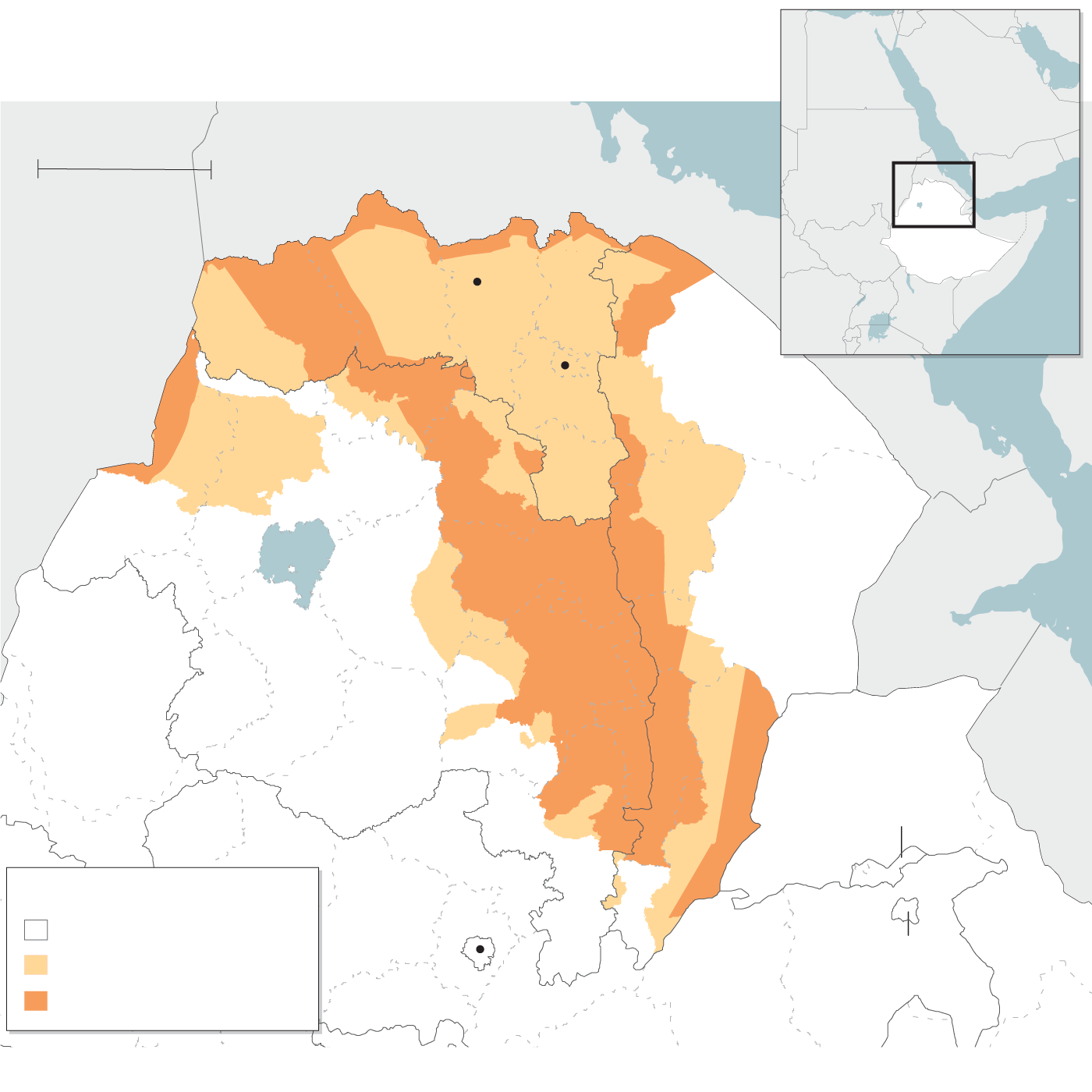 “We have been forced to work in a hospital without intravenous fluids, gloves, even the most commonly used antibiotics, anti-pain medication, drugs vital for women undergoing labour and delivery, drugs for various kinds of mental illnesses, basic laboratory tests and a lot of other essential drugs,” the health workers said.

“The oxygen supply to our hospital has become very unreliable and resulted in the death of patients because of the frequent breaking down of machines that could have been easily repaired.”

The hospital has less than 18 per cent of the essential drugs that it needs, compared to 82 per cent a year ago, the statement said. The hospital staff said they have been forced to use expired drugs, while begging local residents to donate soap, detergent, bed sheets and linens.

Children needing surgery have been left to die, and neurosurgeons have been forced to do brain operations without scans or images, the statement said.

Health workers provided photos of skeletal children who are being treated for severe malnutrition, including one of a four-year-old boy named Medhaniye. The hospital staff said he is malnourished because his farming family has suffered food shortages.

“The ox they used to plough their fields was stolen, animal foods were burned to ashes, and household goods were stolen by soldiers,” the hospital staff said. “In the nearby health centre, no medications are available and its equipment was stolen or damaged by the soldiers.”

Another severely malnourished child in the hospital is nine-month-old Milat. “She was born in a forest while the whole family of six was hiding out from soldiers,” the hospital staff wrote. “Most of their cereals were stolen and the remainder was mixed with soil by soldiers. All household goods were stolen. Their harvest was burned to ashes in a field. The father was forced to carry weapons to the battlefield and was beaten by soldiers.”

Over the past six months, because of the access restrictions, Tigray has received less than 12 per cent of the humanitarian supplies it needs, the UN says.

“Several UN and non-governmental organizations will be forced to cease operations if humanitarian supplies, fuel and cash are not delivered to Tigray very soon,” he said.