If 2020 was a typical election year, the balloons and confetti would be falling on delegates this month, and parties would be revving up their door-knocking campaigns for a post-Labour Day sprint to U.S. election day on Nov 3.

But the COVID-19 pandemic had upended nearly every aspect of the traditional political campaign, from throngs of supporters crowded into ballrooms, to neighbourhood canvassing, to how American voters will cast their ballots.

Fundraising dinners have been replaced by Zoom calls. Rallies have become text-message appeals. And the U.S. Postal Service has become ground zero for a heated dispute over mail-in ballots – with Donald Trump claiming that widespread vote-by-mail fraud will force an election re-do.

All this could mean an election day that stretches into weeks as the parties fight in court over who won the presidency – a legal battle that could make the disputed 2000 presidential election between George W. Bush and Al Gore look like a minor disagreement in comparison.

Here is what you need to know about the most unusual presidential election in recent memory:

The shift to a largely virtual format for nominating conventions this month has sparked a debate over whether to permanently scrap the national in-person gatherings given that little party business is conducted at the events and the presidential nominees are usually known well in advance.

But party conventions still serve an important purpose to energize voters and attract wealthy donors, said Rose Kapolczynski, a long-time Democratic strategist in California and Washington state. “There is something about the ritual that we’re missing, just like we’re missing weddings and birthday parties.”

The Democratic National Convention played out largely over video conference last week, with only a handful of party operatives in person at a control room at the Wisconsin Center in Milwaukee, Wis. 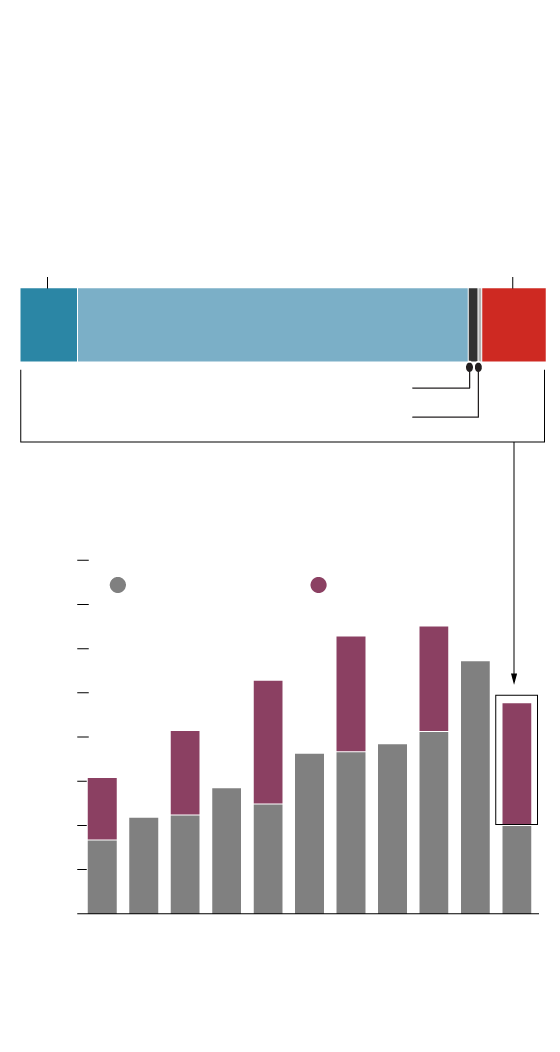 The 2020 presidential and congressional elections will likely

exceed the records set in previous campaigns. Campaigns have

27 Dem. pres.candidates who dropped out 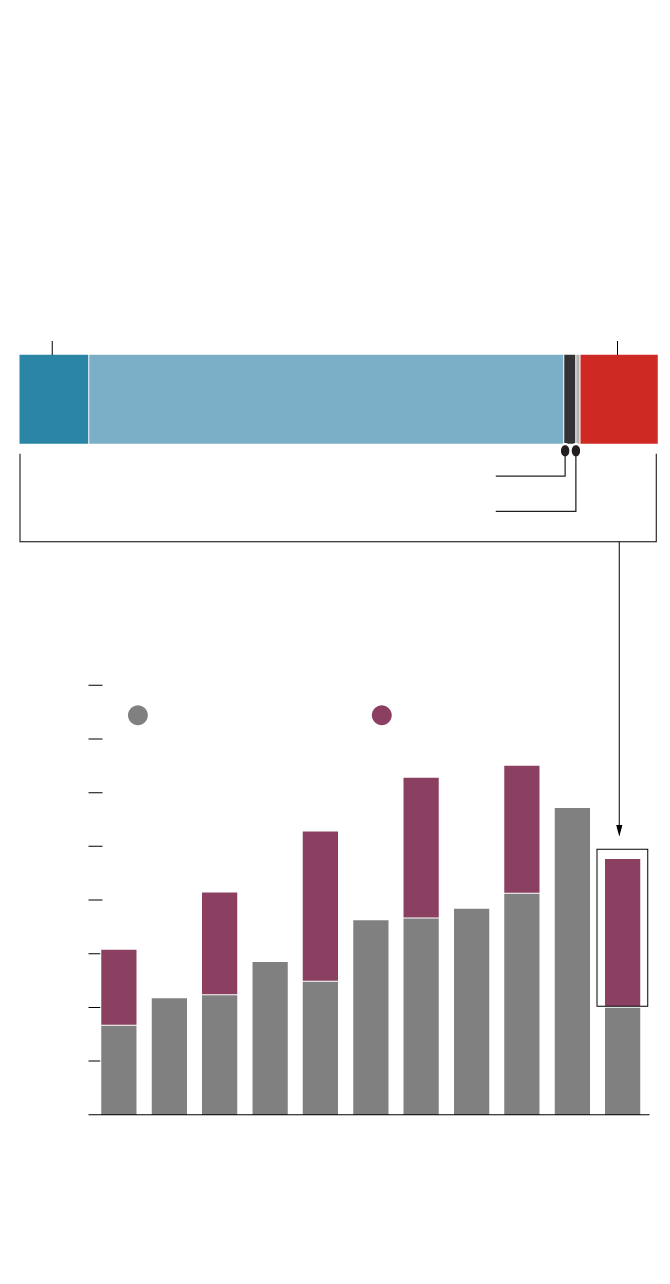 The 2020 presidential and congressional elections will likely

exceed the records set in previous campaigns. Campaigns have

27 Dem. pres. candidates who dropped out 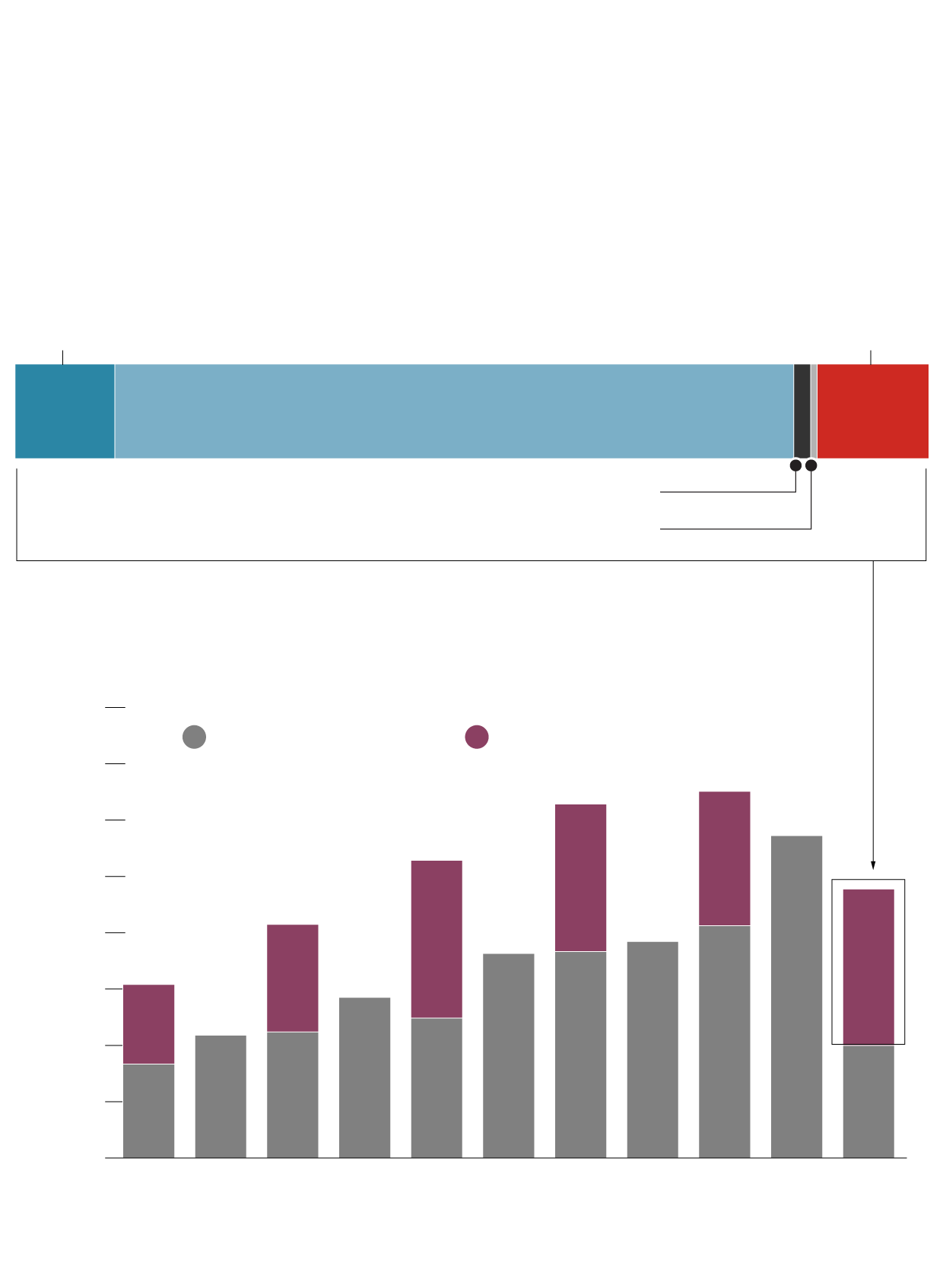 campaigns. Campaigns have raised more than US$4.8-billion so far* –

27 Democratic presidential candidates who dropped out

Joe Biden and Kamala Harris accepted their nomination through a livestream from Delaware. Speeches were trimmed down to just one hour of nightly live network television. Democratic heavyweights such as Michelle Obama, Hillary Clinton and Bernie Sanders spoke by videofeed, or in pre-taped appearances. The roll call on Tuesday night to officially nominate Mr. Biden was largely for show; delegates had already cast their votes remotely on the previous weekend.

Republicans are set to launch their own largely virtual convention on Monday over four days in Charlotte, N.C. Mr. Trump is expected to accept his nomination from the White House grounds, while his running-mate Mike Pence will speak from Fort McHenry National Monument near Baltimore, Md.

More than 300 delegates will still meet in person on Monday to renominate Mr. Trump. They will have to be pre-tested for COVID-19 before travelling to Charlotte, wear masks and practise physical distancing, the Republican National Committee said. They will also be outfitted with bluetooth-enabled badges that will be used for contact tracing in case any of the delegates later test positive for the virus.

Politicians, operatives and researchers will be watching closely to see whether campaigns benefited this year from a postconvention polling and enthusiasm bump in COVID-19 era politics.

The presidential candidates will square off in the first of three debates on Sept. 29 at a health campus in Cleveland.

The debates will be 90-minutes long with no commercial breaks, although plans for whether they will all include a live audience and physical-distancing requirements have not yet been finalized.

Miami officials last month approved a plan to arrange the second presidential debate on Oct. 15 in town-hall style with one moderator, 36 undecided voters who will be asking questions and a live audience of up to 115 people spread out across a venue with capacity for more than 2,000, according to the Miami Herald. Attendees will have to undergo temperature screenings and complete health questionnaires, while protesters will be allowed to gather in a “designated free-speech zone.”

The third debate will be on Oct. 22 at Belmont University in Nashville.

“Primarily, it’s going to be a television event,” university president Bob Fisher told the local NBC-affiliate TV station last week. The university hasn’t come out with its formal plans yet.

With COVID-19 putting the kibosh on rallies and cross-country tours, some campaigns are turning to digital tools to help reach voters and energize core supporters.

But the decision on whether to hit the campaign trail has taken on a partisan hue, with Trump supporters pressing ahead with some in-person events, while the Biden campaign has shifted the bulk of its efforts online.

Forced to scrap arena rallies after a disappointing turnout at an event in Oklahoma in June, the Trump campaign has launched two bus tours and held several scaled-down outdoor rallies. It has continued door-knocking in swing states such as Pennsylvania and Wisconsin.

Mr. Biden, meanwhile, has largely campaigned from his home in Delaware, while his field workers have stuck to texts, calls and dropping off yard signs.

Both presidential candidates have hosted Zoom fundraisers and are pouring hundreds of millions of dollars into online advertising. Strategists say that political ads are targeting not just television stations and social-media platforms such as Facebook this year, but mobile games and video-streaming platforms such as Hulu to capture the attention of voters who have been stuck at home spending hours on their phones.

Democrats acknowledge that the partisan divide over whether to hold in-person events could potentially disadvantage them. But they argue that many voters, concerned about COVID-19, may not want to come into close contact with campaign volunteers.

Instead, they are increasingly turning to apps that let volunteers reach voters over text message and WhatsApp, conduct virtual phone banks from anywhere in the country, or enable supporters to match the personal contacts on their phones against a list of high-priority voters identified by the campaign so they can mobilize people within their social networks.

For the campaigns, one positive aspect of the economic shutdown resulting from the coronavirus is that more people are easier to reach by phone now that they’re having to spend more time at home, Ms. Kapolczynski said. “In some cases, it’s doubled the number of people that a volunteer can reach in an hour,” she said.

Ballot measures, which seek to create new legislation through referendums, have become increasingly popular, helping in recent years to legalize marijuana in several states and raise funds for affordable housing and public schools.

But they rely on campaigns garnering thousands of signatures to qualify – something that has become much more difficult in the era of physical distancing. 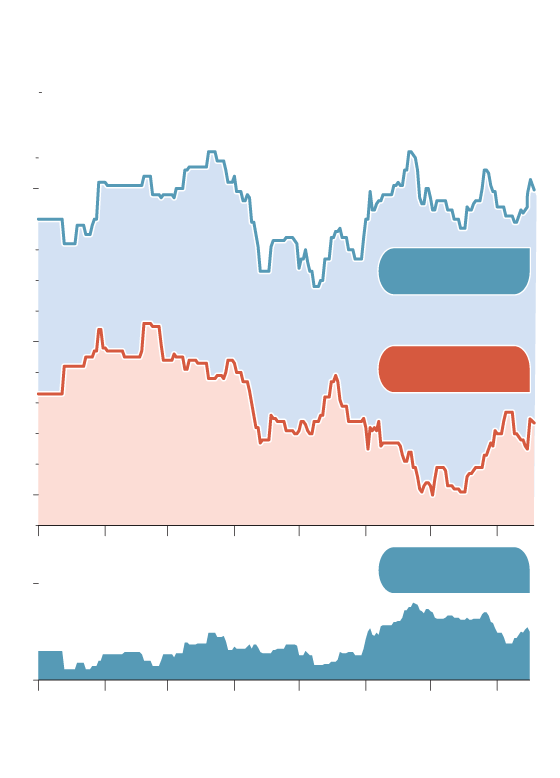 for 2020, as compiled by RealClearPoliticss, 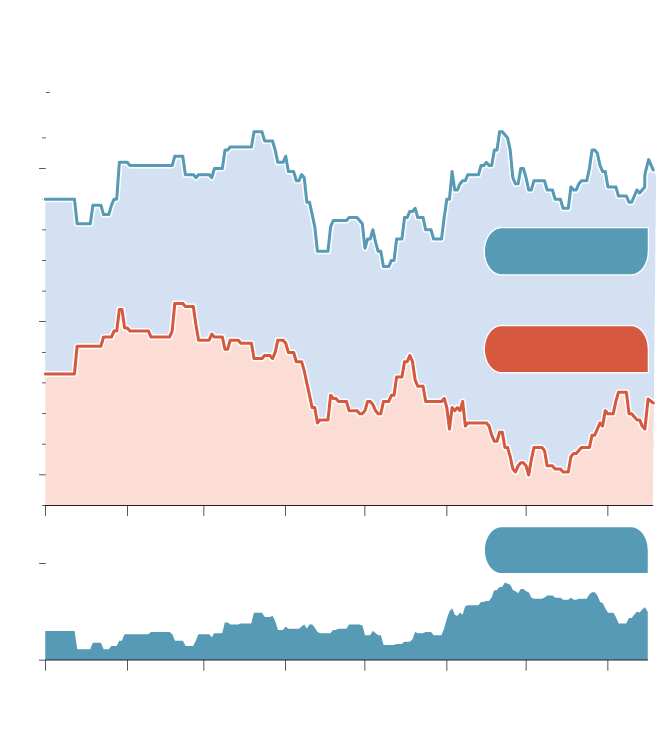 The graphic shows the latest average polling data for 2020,

as compiled by RealClearPolitics, as of Aug. 19. 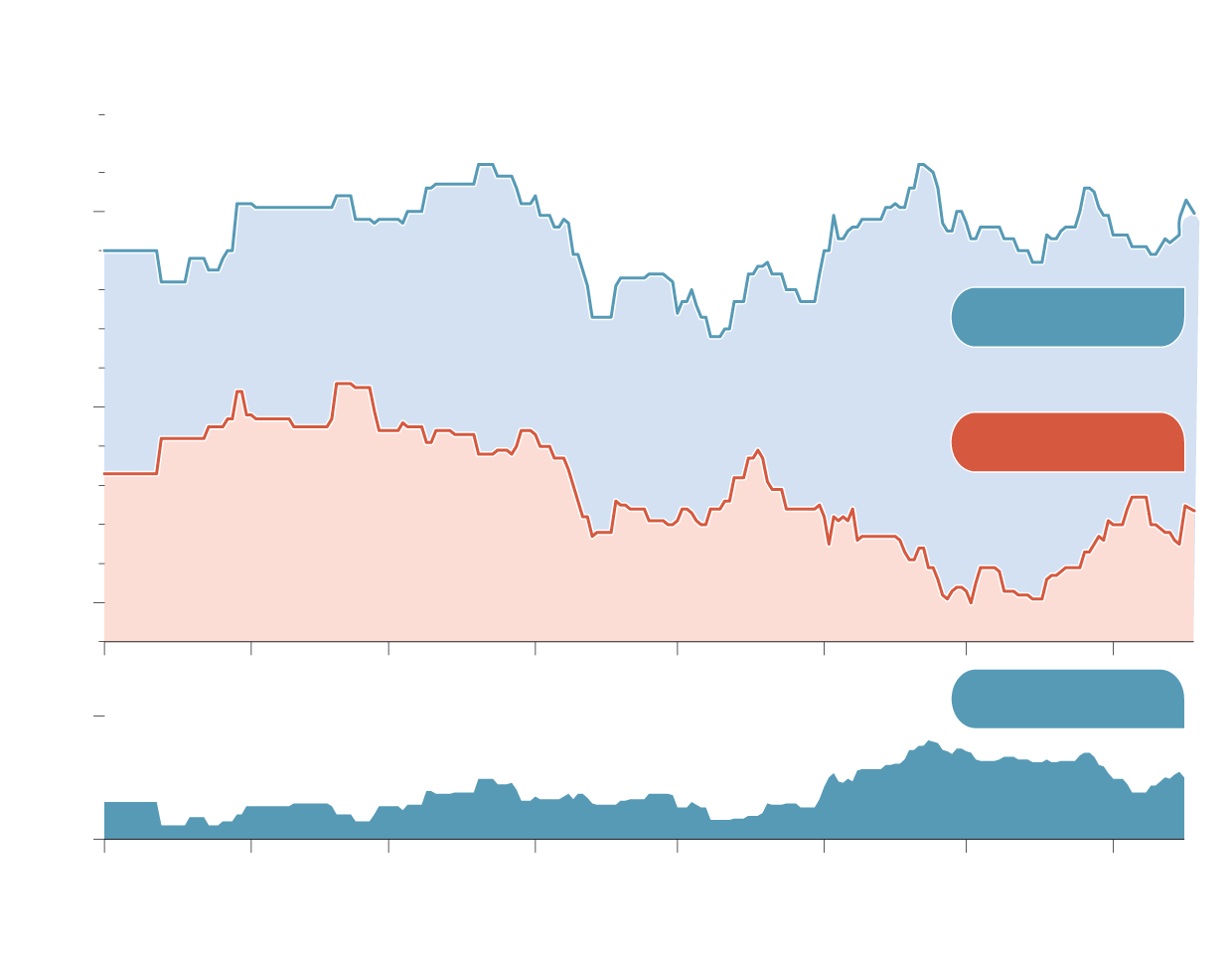 The graphic shows the latest average polling data for 2020, as compiled by

RealClearPolitics, as of Aug. 19.

Groups sponsoring ballot measures in at least 14 states have announced plans to shelve their efforts until 2022 because they couldn’t get enough signatures.

A handful of states have allowed ballot-measure groups to collect electronic signatures, including a proposal to introduce ranked-choice voting in Massachusetts.

Other jurisdictions, including the District of Columbia, are allowing voters to download petitions from the internet, sign them and e-mail them back to the campaigns. But courts have refused to grant ballot campaigns in Oregon, Colorado, Idaho and Ohio emergency exemptions to state laws in order to collect e-signatures or extend the deadline to gather signatures.

The most controversial aspect of the campaign is how voters will actually cast their ballots.

As many as 50 per cent of voters are expected to return ballots by mail or visit early voting sites to avoid crowded polling stations.

That has led to a bitter partisan battle over the state laws governing absentee voting – and a congressional fight over the fate of the U.S. Postal Service.

Mr. Trump and some Republicans have claimed that voting by mail is ripe for fraud and foreign interference. Republicans have sued to block new mail-in voting laws in Nevada and New Jersey, and to prevent Pennsylvania from installing ballot drop-boxes.

Mail-in voting laws vary dramatically by state. Some plan to automatically send ballots to all registered electors, while others only allow voters to apply for a mail-in ballot if they meet certain requirements, such as being away on a military deployment. Some accept ballots that arrive after the election is over so long as they are postmarked by Nov. 3, while the rest require ballots to arrive by election day.

The complexity of mail-in voting during a pandemic and the political battles it has inspired worry some campaign strategists who fear it could disenfranchise large swaths of voters.

Campaigns will need to focus on boosting turnout enough to win by such a large margin that any problems with mail-in ballots won’t matter to the results of the election, he said.

With so much hand-wringing over voting by mail, election experts say there is a good chance we won’t know who won the election until days – or weeks – after the vote.

A close race could invoke the spectre of the 2000 Bush-Gore campaign, which was decided more than a month after election day when the Supreme Court shut down a recount in Florida, prompting Democrat Al Gore to concede to Republican George W. Bush. But it could be even messier than that. Mr. Trump has hinted that he may contest the election if he loses, telling reporters last week: “It will end up being a rigged election or they will never come out with an outcome.”

Under federal law, states have until five weeks after the election – which would fall on Dec. 8 – to give Congress lists of electors who will cast their Electoral College votes. But if a court challenge delays the process beyond that deadline, a state legislature could potentially decide to make up its own list of electors backing its preferred candidate – something the Republican-controlled Florida legislature considered in 2000 while awaiting the court’s ruling.

Swing states such as Wisconsin, Pennsylvania and Michigan are all split between Democratic governors and Republican-controlled legislatures, raising the possibility that a state legislature could vote to send in one list of electors backing Mr. Trump even as the governor certifies election results that favour Mr. Biden.

If some states still haven’t agreed on their election results by Jan. 6 – when the Congress is set to meet to formally count the Electoral College votes – then the House gets to decide the presidency. But each state’s congressional delegation gets just one vote in the decision, making the outcome of any congressional vote even harder to predict.

In the case where Congress can’t decide, and the dispute stretches on past Jan. 20 – the last day of Mr. Trump’s current term – then the Speaker of the House, currently Democrat Nancy Pelosi, would be first in line to be named acting president.

But being appointed acting president requires that a person step down from Congress, giving up their elected seat. If Ms. Pelosi turned down the appointment, then it would go to Senate President pro tempore – currently Republican Chuck Grassley.

If Mr. Grassley didn’t want to give up his Senate seat, then the acting president would be appointed from Mr. Trump’s first-term administration, starting with the Secretary of State.

In which case, say hello to President Mike Pompeo.