Some Venezuelans got a COVID-19 shot this week thanks to a donation of Cuban-developed vaccines, bringing relief to some residents desperate to protect themselves while simultaneously deepening the mystery around the country’s donation-dependent vaccination campaign.

Thirty-thousand shots of the three-dose Abdala vaccine entered Venezuela’s inoculation effort just days after Nicolas Maduro’s government and Cuban authorities reached an agreement under which Havana is expected to deliver 12 million doses in the following months. That deal follows vaccine-donation agreements with other allies, but it remains unclear what the terms of the arrangements are, how many people have received a shot and how well priority groups are being respected.

“If we look at the promises with the Russian and Chinese vaccines, there’s a lot of emphasis on the agreements and the numbers, and then the delivery of those vaccines and who gets what or in Venezuela becomes much more mysterious,” said Jacqueline Mazza, senior adjunct professor of Latin American studies at Johns Hopkins University. “Simply put, the numbers just aren’t there. When we put it together, we are still in the same position we are with the handling of the coronavirus in Venezuela: It’s all shrouded in mystery, and clearly, the figures that are not giving us the true story.”

Venezuela began the first phase of its vaccination campaign in February by focusing on the health, law enforcement and education sectors. It expanded the effort in late May to anyone 60 years of age and older.

Since February 13, at least 380,000 doses of the Russian Sputnik V vaccine have arrived in Venezuela, representing 3.8 per cent of the 10 million initially agreed to in December. Venezuela in March also received a batch of 500,000 doses of the Vero Cell vaccine donated by the Chinese state company Sinopharm. Two months later, Maduro announced the arrival of 1.3 million vaccines from China without giving details.

Those shipments plus the one that arrived from Cuba mean the country has received at least 2,210,000 vaccines. It has only administered 1,466,988 of them and only 223,858 people – .8 per cent of the population – are fully vaccinated, according to data gathered by Johns Hopkins University.

Maduro has said he is aiming to vaccinate “at least 70 per cent of the population” by September. But health care workers and teachers are still waiting for their shots, and some Venezuelans have expressed reservations about the lack of information on the Abdala vaccine and the campaign.

“I have not been vaccinated yet,” said 32-year-old worker Edwin Quintana. “I don’t really know if the Cuban vaccine has gone through the verification processes of the World Health Organization.”

Cuban officials last week said the vaccine has an efficiency of 92.28%. It has not been cleared by the WHO.

The union representing health care workers and the National Academy of Medicine of Venezuela this week expressed concerns about the vaccine, which the latter group described as “products of doubtful scientific credibility” and hoped that the WHO and the Pan American Health Organization would weigh in.

Beyond the doubts over Venezuela’s agreements with allies, it is also unclear if Venezuela will receive vaccines through a United Nations-led effort. Through the COVAX mechanism, Venezuela expected to receive a supply of about 11.4 million doses from a pool of different vaccines. The government was able to make a down payment, but Maduro last month said $10-million that would have covered the amount required by COVAX was blocked because of international sanctions.

Mazza expects years to go by before Venezuela can vaccinate its roughly 30 million population.

“How does a country with a collapsed distribution system and totally incapable bureaucracy now administer a vaccine? They’re clearly not, in essence, ramping up to deliver on any scale,” she said.

At a vaccination site Tuesday in the capital of Caracas, Yoleima Cartaya, an independent worker, reasoned that a vaccine, regardless of brand, is better than no vaccine.

“I think the best thing is to have it,” Cartaya, 37, said after getting her first shot of the Abdala vaccine. “I feel great.” 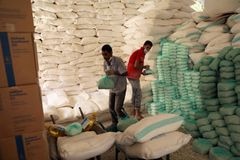 Colombia struggles with multitude of issues as it heads for crucial vote
June 21, 2021 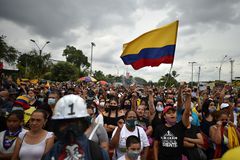 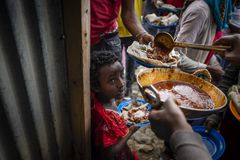