President Bashar al-Assad, who has mostly won Syria’s civil war, now faces an acute economic crisis that has impoverished his people, brought about the collapse of the currency and fuelled a rare public rift in the ruling elite.

Government salaries have become nearly worthless. Protests against falling living standards have broken out in the southeast.

The Syrian pound is worth so little that people have posted images on social media of bank notes used to roll cigarettes.

The government is so strapped for cash that it is squeezing wealthy businessmen to help fund the state, a move that prompted a powerful Syrian tycoon to openly criticize the government.

For nine years, Mr. al-Assad has relied on brute force to beat back the rebels who sought to end his family’s decades-old grip on power. But now, with the war’s biggest battles behind him, he faces new threats that he cannot bomb his way out of or count on his few allies to help him surmount.

That the tycoon, a member of Mr. al-Assad’s inner circle, had the temerity to go public with his dispute suggests a weakening of his power. And strict U.S. economic sanctions that take effect Wednesday are likely to make matters worse.

“The problem for al-Assad is that he does not have a solution,” said Danny Makki, a Syria analyst at the Middle East Institute in Washington. “It is going to create a high intensity crisis, and he either has to talk to the Americans and make concessions or endure what could be a major economic collapse.”

The war has throttled Syria’s economy, reducing it to a third the size it was before the war and taking a toll thought to be in the hundreds of billions of dollars.

An estimated 80 per cent of Syrians live in poverty. About 40 per cent were unemployed at the end of 2019, the latest figures available, and joblessness has only increased because of government restrictions to control the coronavirus.

The collapse of Syria’s currency has compounded the crisis.

Worth about 50 to the U.S. dollar before the war, the Syrian pound traded in the hundreds per dollar in recent years, but began plummeting last fall in connection with a financial crisis in neighbouring Lebanon, where many Syrians kept their money. Unofficial capital controls aimed at stopping a run on Lebanese banks have also blocked Syrians who bank there from withdrawing dollars.

Last week the Syrian pound fell to 3,500 to the U.S. dollar on the black market, destroying the purchasing power of government employees. Prices for imported staples such as sugar, coffee, flour and rice have doubled or tripled.

The government has been hitting up Syrian business leaders for money to help finance government salaries and services, according to Mr. Makki and Jamil al-Sayyed, a former Lebanese security chief who meets with Syrian officials.

Most of those approached have quietly acquiesced, and how much they paid has not been made public.

But Syria’s best known tycoon – Rami Makhlouf, a billionaire financier with holdings in electricity, oil and telecommunications – pushed back, creating a rare open divide at the top levels of Syrian society.

Mr. Makhlouf is a first cousin and childhood companion of Mr. al-Assad’s who used his connections to the ruling family to become one of Syria’s wealthiest men.

The U.S. Treasury Department sanctioned Mr. Makhlouf in 2008 for corruption, freezing any assets he held in U.S. banks. Calling him “one of the primary centres of corruption in Syria,” the department said he had “amassed his commercial empire by exploiting his relationships with Syrian regime members” and “manipulated the Syrian judicial system and used Syrian intelligence officials to intimidate his business rivals.”

When Mr. Makhlouf refused to pay, the Assad government turned the screws, barring him from state contracts, freezing his assets and levelling about US$180-million in fees on SyriaTel, the country’s main mobile phone provider and once a cash cow for Mr. Makhlouf.

That’s when Mr. Makhlouf went public, posting a series of videos on Facebook complaining about the arrest of his employees, casting himself as a patron of the security services and calling on Mr. al-Assad to rectify matters.

“The situation is dangerous,” Mr. Makhlouf said in one video. If the pressure on him and his employees continued, he said, there would be “divine justice because we have started a dangerous turn.”

Efforts to reach Mr. Makhlouf through his social-media accounts were not successful.

“The regime is suffering from many economic and other problems, or Rami would have never dared to do these videos,” said Firas Tlass, a former associate of the Assad family who defected early in the war.

In another sign of turmoil in the government, Mr. al-Assad dismissed the prime minister, Imad Khamis, on Thursday in a move analysts said sought to deflect blame for the country’s economic distress.

Fearing that public grumbling in pacified areas of the country could fuel unrest, the security forces have detained a number of citizens who have written about corruption and the economic decline on social media.

In April, an economics professor at Damascus University, Ziad Zanboua, wrote on Facebook that he had been fired after speaking publicly about the erosion of Syria’s middle class.

“Why is a university professor punished in a state of institutions and law?” Prof. Zanboua wrote. “Because I committed the greatest of all indecencies: I talked?!”

Anger about sinking livelihoods has flared even among members of Mr. al-Assad’s Alawite minority, whose young men fought in large numbers with his forces only to find that they will share in the country’s poverty instead of reaping the benefits of victory.

One Alawite man with relatives in the military said the currency collapse had made their salaries virtually worthless, with army generals earning the equivalent of less than US$50 a month and soldiers earning less than a third of that.

“We sacrificed tens of thousands of our sons and men to defend the united, strong Syria and live in dignity,” the man said, speaking on condition of anonymity to avoid arrest. “The President should find a solution or leave.”

Mr. al-Assad, who occasionally appears in public wearing dark suits and conservative ties, has not responded publicly to Mr. Makhlouf and has blamed conspiracies by foreign adversaries – the United States, Israel and Saudi Arabia, among others – for his country’s problems.

He has rarely addressed the economic pain facing his citizens, but last month he told a committee that restrictions on business and movement aimed at preventing the coronavirus had trapped Syrians “between hunger and poverty and deprivation on one side and death on the other.”

Mr. al-Assad has managed to reclaim most of the country, aside from pockets in the north and most of the northeast, with generous military assistance from Russia and Iran.

But those allies, both struggling under Western sanctions, are unlikely to bail him out financially. Officials in both countries have raised questions about how Mr. al-Assad will pay them back for their support.

“The Russians, the Iranians, the allies – they are not going to plow money into Syria,” said Mr. Makki, the Syria analyst. “They want a return on their investment.”

The United States will impose sweeping new sanctions this week that could target the business people Mr. al-Assad needs to rebuild his shattered cities.

The Caesar Act, named after a Syrian police photographer who defected with photos of thousands of prisoners tortured and killed in Syrian custody, requires the U.S. president to sanction anyone who does business with or provides significant support to the Syrian government or its officials.

It specifically targets anyone who provides aircraft parts, offers services to the Syrian oil industry or engages in engineering or construction projects for the state or people linked to it.

Analysts said the legislation is so broad that it is unclear how it will be applied, but that it has already sent a chill through companies in the region that were eyeing opportunities to profit from Syria’s reconstruction efforts.

“If I am a businessman and I have a few million dollars to invest, I won’t go to Syria today,” said Kheder Khaddour, a Syria analyst at the Carnegie Middle East Center in Beirut. “It’s too risky.”

Canadians land in Montreal after pandemic had stranded them in Syria
June 5, 2020 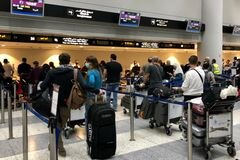 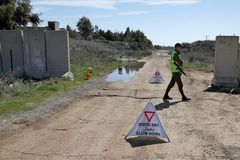