Reeling under tremendous pressure amid the ongoing raging wave of COVID-19 in India, the country’s medical professionals are outraged over controversial comments made by an influential yoga guru, Baba Ramdev, against modern medicine and doctors on the front lines of the pandemic.

In videos that went viral last week, Mr. Ramdev claimed doctors and their treatments against the coronavirus have caused hundreds of thousands of deaths in the country.

He also mocked patients who were desperate for oxygen cylinders, claiming, “God has filled the universe with oxygen and we just need to breathe properly... yet, people are complaining about a shortage of oxygen, medicine, hospital beds, cremation sites and spreading negativity all around.”

His statements sparked a backlash from doctors and families of COVID-19 patients. “It is wrong to make such irresponsible statements. Remdesivir helps in clinical recovery, but it is not a life-saving drug. It also does not affect any person [adversely]. It is wrong to make such statements about allopathy,” Maharashtra state COVID-19 task force member Shashank Joshi told local media, referring to Mr. Ramdev’s allegation that drugs such as Remdesivir and Fabiflu, which have been approved by the Drugs Controller-General of India, had failed to help patients.

Mr. Ramdev withdrew his statements, clarifying that he has “no ill-will against modern science” after federal health minister Harsh Vardhan, a doctor himself, intervened and asked for a retraction of the “objectionable” statement that he warned could “break the morale of doctors and weaken our fight against the pandemic.”

But the damage from Mr. Ramdev’s statements, Indian medical experts say, has already been done, by creating fear and a false perception that medicines and vaccines are ineffective.

Mr. Ramdev, the co-founder of Patanjali Ayurveda, a large multinational herbal products company, has styled himself as a spiritual leader through mass yoga camps. He has attracted millions of followers across the country and among the Indian diaspora, and also counts some of India’s most powerful politicians in the ruling Bhartiya Janata Party as friends and supporters.

Last year, Mr. Ramdev tried to sell a herbal product, dubbed Coronil, as a cure for COVID-19, until authorities clamped down. He was later allowed to advertise the supplement as an “immunity booster” and continues to market it widely.

A larger tussle between traditional and modern medicine has been playing out in India over the past year, as doctors called out the government for promoting what they called “mixology” and adopting alternative medicine such as Ayurveda to treat COVID-19 without scientific evidence to back up such therapies. But now, even Ayurvedic practitioners are distancing themselves from Mr. Ramdev’s controversial statements.

The Indian Medical Association (IMA) called for Mr. Ramdev’s arrest, demanding that he be prosecuted under the Epidemic Diseases Act for claims, which the organization said were “a threat to the literate society of the country as well as to the poor people falling prey to him.”

A branch of the IMA in the state of Uttarakhand, where Mr. Ramdev’s Patanjali Ayurved company is headquartered, sent him a defamation notice on Tuesday seeking damages worth C$166-million, demanding Mr. Ramdev post a video countering the charges he made against modern medicine. Several other medical associations have also issued legal notices against him.

Hospitals have also condemned Mr. Ramdev’s attacks on doctors, noting his remarks were particularly ill-timed as their medical staff continue to put their own lives on the line on a daily basis.

“After over 1,000 doctors in India have lost their lives fighting the pandemic, to be ridiculed in this way, calling modern medicine a ‘stupid science’ and labelling us murderers is a dishonour and demoralizing,” Shankul Dwivedi, joint secretary of the IMA’s Junior Doctors’ Network, said in an interview.

“It is very unfortunate Ramdev is being protected by people at the top. He is trying to boost his business by defaming modern medicine. He is also spreading vaccine hesitancy by falsely claiming 10,000 doctors have lost their lives after two doses. He appears daily on television, is watched by millions, and is a repeat offender,” Dr. Dwivedi added. “It percolates to the masses. So it’s important for us to speak up against the ideology he is trying to spread,”

There is widespread anger and frustration growing in the medical community that doctors now also have to deal with an “epidemic of misinformation,” said Kamna Kakkar, senior resident and ICU specialist at the Postgraduate Institute of Medical Sciences in the state of Haryana, neighbouring Delhi.

“We have seen piles and piles of dead bodies in our hospital in the last few months. I have been sleeping for just four hours a day, spending my days in a PPE suit, not being able to drink water or go to the washroom,” she said. “In the middle of all this, Ramdev’s intensified attack against doctors is hugely damaging,”

Dr. Kakkar noted Mr. Ramdev’s comments have already affected her work with coronavirus patients on the ground. Previously, she said, her patients trusted her and any treatments she recommended. Now, her patients question the steroids she prescribes.

“One of my patients, a big fan of Ramdev’s, started fighting with me, demanding that I prescribe Ramdev’s Ayurvedic medicines such as Coronil, which have no evidence of efficacy against COVID-19,” she said.

Even more concerning for medical professionals, a large number of patients with falling oxygen saturation levels had been trying to treat themselves by doing breathing exercises. Others have been self-medicating with herbal concoctions at home for over a year in an effort to prevent COVID-19, Dr. Kakkar learned, resulting in liver damage, among other complications.

“Patients have progressed from moderate to severe COVID by the time they come to us,” Dr. Kakkar said. “How do we help a patient, then, given COVID is a such a time-sensitive disease and the treatment must be done at the right time?”

Even as India’s health care workers battle a multitude of pressures such as low pay, long work hours and rising mental-health issues, “the parallel pandemic of misinformation” must be challenged with renewed energy, the IMA’s Dr. Dwivedi said.

“When an influential person makes defamatory statements against modern medicine, it damages the patient-doctor relationship, spurs violence against doctors and sets us back on the vaccine hesitancy we have been fighting.”

Tens of thousands homeless in eastern India after cyclone batters coast
May 26, 2021 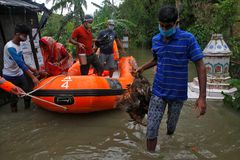 As COVID-19 ravages India, one state has charted its own course against the pandemic
May 23, 2021