Syrian rescue worker Samir Salim found his mother’s body under their collapsed house, but there was no time for a funeral.

“We buried her and went back to work. There were a lot of people under the rubble,” he said. Months later, he can no longer even visit her grave.

When Syrian government forces clawed back his eastern Ghouta hometown, near the capital Damascus, Salim followed hundreds of thousands of others who had fled to the northwest under rebel surrender deals.

Now, he and “White Helmet” workers driven from different parts of Syria have come together in the rebel-controlled town of Azaz to try to rebuild their lives near the Turkish border.

Their work has changed drastically: with no warplanes cruising overhead, they help the opposition authorities put out fires, clean the streets, and plant trees.

Azaz falls within a de facto buffer zone which Turkey has carved out since 2016. The northwest corner remains Syria’s last major insurgent stronghold and is now in President Bashar al-Assad’s crosshairs.

The White Helmets have often said they worried about reprisals as government forces defeated rebel enclaves with Russian and Iranian help.

The civil defence service, which receives funding from Western governments, pulls people from the rubble of air strikes in rebel territory. Assad has accused it of being a Western-sponsored front for al Qaeda’s branch in Syria.

Salim said many comrades stayed behind in eastern Ghouta.

Before leaving, he helped burn down the emergency centre he had once helped establish in his town, where his three brothers also worked.

As buses shuttled evacuees out through government territory, including Salim’s wife, five children, and relatives, some people cursed and threw stones at them, he added.

“We arrived with great misery,” said Salim, 45. “Our peers gave us an exceptional welcome.”

Azaz is worlds apart from Ghouta, which lived through years of bitter siege and air strikes - far from the Turkish influence of the northwest.

Salim recalled a sarin gas attack that killed hundreds of people in 2013 in the rebel enclave. “People were running down the streets screaming ‘chemicals’ and there were a lot of civilians lying in the streets foaming at the mouth.”

He said he injured his spleen during an air strike on a market in 2016 and had part of his intestines removed.

The White Helmet first responders say Damascus has specifically targeted them during the more than seven-year conflict. The government says it only targets militants.

“We fear building a new life in a foreign place and then having to leave once again,” Salim said. “I fear northern Syria will face what we did in Ghouta.”

His family now lives in the nearby Afrin region, where a Turkish assault earlier this year ousted Syrian Kurdish fighters. Those forces have accused Turkey of expelling Afrin’s residents to resettle other people, which Ankara denies.

The bloody battle for Aleppo in northern Syria marked a turning point in the war as pro-government forces swept through the insurgent half of the city. Rashid said 12 friends from his centre in Aleppo were killed.

“Nobody expected me to persevere, especially since my parents are in Turkey. But I cannot leave the civil defence,” the former shoe designer said.

“In Aleppo, the bombing was so heavy we couldn’t sleep. “Here (in Azaz), there is no such pressure.”

Nayef al-Aboud, also part of the same team, said they largely work on services like helping with car accidents.

“Today, our centre has workers from the displaced populations,” said Aboud, 22, who is from Azaz. “Our strength has grown because they are here, we learn from their experiences, they lived through harsher times.” 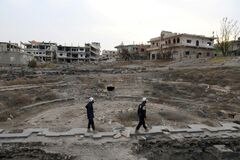 ‘We are trapped:’ Remaining White Helmets plead for evacuation from Syria
July 26, 2018 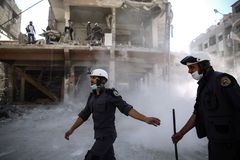 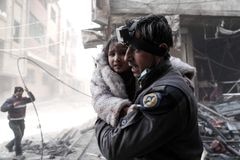