Thailand’s junta chief-turned-civilian prime minister Prayuth Chan-ocha faces a tough task in reviving a faltering economy and sinking investor confidence – the same problems as when he seized power in a military coup five years ago.

Prayuth was confirmed as prime minister by parliament on Wednesday but he will be leading a fragile 19-party coalition with only a four-seat majority in the House of Representatives. That raises concerns about passing legislation and the budget that could disrupt public spending on much-needed larger investment projects and keep investors away.

“This scenario appears vulnerable to the risk of a weak and short-lived government … thus, causing a risk of policy discontinuity,” said Charnon Boonnuch, economist at Nomura in Singapore. “Political uncertainty will remain high and continue to weigh on the growth outlook.”

Investors have been worried about political risk since no clear winner emerged from Thailand’s March 24 general election.

Southeast Asia’s second-largest economy grew 2.8 per cent in the first quarter from a year earlier, the weakest since 2014, as public investment, exports and tourism slowed amid rising global trade tensions and political risks at home.

Political uncertainty has affected private sector sentiment and dampened prospects for public spending this year, said Sarun Sunansathaporn, economist of Bank of Ayudhya, who slashed his 2019 economic growth forecast to 3.2 per cent from 3.8 per cent.

The central bank said last month that heightened political uncertainties have clouded the outlook for economic policy. It is expected to cut its growth forecast – currently at 3.8 per cent – for a third time in six months later this month.

Thailand’s state planning agency said the fiscal 2020 budget will be delayed by 2-4 months, adding to the problems of already slow public spending and thus holding back private investment.

Listed firms’ free cash flow – cash that is yet to be invested – are at 10-year highs of about 250 billion baht ($7.9-billion), said Naris Sathapholdeja, head of TMB Analytics.

Initiatives such as the ambitious $45-billion Eastern Economic Corridor project to draw investment into the country’s industrial east could be delayed if the coalition is unable to work together and the budget is gridlocked.

The junta has taken some cautious steps to lift growth, largely through short-term economic measures and subsidies for low-income earners, analysts said, but more action is needed beyond simply staying on the same course.

“If we want the economy to grow 3.5 per cent this year, the new government will need additional stimulus measures worth 30 billion baht to 50 billion baht,” said Thanavath Phonvichai, an economics professor at the University of the Thai Chamber of Commerce.

Although the new government is expected to introduce economic measures to boost consumption, its instability will continue to weigh on market sentiment, said Saharat Chudsuwan, head of marketing and wealth advisory of Tisco Asset Management.

“Everyone believes the government may not be stable. If the stock market ever rises because of the election, it may not go very far,” he said.

The Thai stock market has risen about 5 per cent this year, driven by recent foreign fund inflows across the region, but still trailing the Philippines and Vietnam.

Industry still hopes for some stability, as business sentiment was at a 3-month low in April while consumer confidence hit its lowest in 19 months in May.

“We want a new government to be formed quickly and to be stable,” said Supant Mongkolsuthree, chairman of the Federation of Thai Industries.

“If the government is stable, investment will improve and foreign trade negotiations will be more credible,” he said. 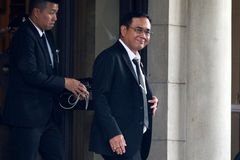