The presidents of Turkey and Russia spoke by phone Friday to try to defuse tensions that rose significantly in Syria after at least 33 Turkish troops were killed in an air strike blamed on the Syrian government, and a new wave of refugees and migrants headed for the Greek land and sea border after Turkey said it would no longer hold them back.

The attack Thursday marked the deadliest day for the Turkish military since Ankara first entered the Syrian conflict in 2016 and also was the most serious escalation between Turkish and Russian-backed Syrian forces, raising the prospect of an all-out war with millions of Syrian civilians trapped in the middle.

It was not clear whether Syrian or Russia jets carried out the strike, but Russia denied its aircraft were responsible.

Turkey’s U.N. Ambassador Feridun Sinirlioglu told an emergency meeting of the U.N. Security Council that the country “lost 34 soldiers” – higher than the 33 previously reported by Turkish officials – and “a significant number” were wounded.

“We have not identified the nationality of the aircraft which struck our convoy and positions,” he said, but “the radar tracks demonstrate that (Syrian) regime and Russian aircraft were in formation flight during that time.”

NATO envoys held emergency talks at the request of Turkey, a NATO member. Turkey’s 28 allies also expressed their condolences over the deaths and urged de-escalation, but no additional NATO support was offered.

Apart from providing some aerial surveillance over Syria, NATO plays no direct role in the conflict. But its members are deeply divided over Turkey’s actions there, and European allies are concerned about any new wave of refugees.

Turkey’s Erdogan, whose country already hosts more than 3.5 million Syrian refugees, has long threatened to “open the gates” for millions to flee to Europe unless more international support was provided.

Greece and Bulgaria increased security at their borders with Turkey as hundreds boarded buses in Istanbul, apparently headed for the Greek border or the Turkish coast opposite the Greek islands.

The crisis stems from a Syrian government offensive that began Dec. 1 with Russian military support to retake Idlib province in northwestern Syria, the last opposition-held stronghold. Turkey, the main backer of the Syrian opposition, has lost 54 soldiers this month, including the latest fatalities, and now feels the need to respond strongly.

Thursday’s attack sharply raised the risk of direct military confrontation between Turkey and Russia. The Turkish stock market fell 10%, while the Turkish lira slid against the dollar.

In their phone call, Erdogan and Russian President Vladimir Putin discussed implementing agreements in Idlib, the Kremlin said. Fahrettin Altun, Erdogan’s director of communications, said they had agreed to meet “as soon as possible.”

Russia’s U.N. Ambassador Vassily Nebenzia said the two leaders agreed to meet “at the beginning of March, when the leaders’ schedules allow.” He added that a Russian delegation currently in Ankara is “intensively ... conducting negotiations to stabilize the situation.”

Erdogan has made no public comments but spoke with a series of global leaders Friday.

In a call with Bulgarian Prime Minister Boyko Borissov, the two agreed to meet Monday, the Bulgarian government’s press office said. It said the phone call clarified “there is currently no direct threat” to the country bordering Turkey.

Erdogan also talked with German Chancellor Angela Merkel and U.S. President Donald Trump, who both called for the Syrian government and its supporters to stop their offensive and for a de-escalation to avoid a humanitarian crisis.

“We stand by our NATO Ally Turkey in the aftermath of the despicable and brazen February 27 attack on Turkish forces in Idlib, which resulted in the death of dozens of Turkish soldiers,” said U.S. Secretary of State Mike Pompeo in a statement. “The (Syrian President Bashar) Assad Regime, Russia, Iran and Hizballah must cease their ongoing attacks in Idlib.”

U.N. Secretary-General Antonio Guterres told reporters that he’s talking with Russia and Turkey, appealing for an immediate ceasefire in Idlib, but “we are not yet there.” He warned that “without urgent action, the risk of even greater escalation grows by the hour, and as always, civilians are paying the gravest price.”

At Friday’s emergency Security Council meeting, 13 of its 15 members supported Guterres’ call for an immediate ceasefire.

But Russia and China made no mention of a ceasefire, insisting that Syria has a right to go after terrorists in their own territory. China’s U.N. Ambassador Zhang Jun did say that “counterterrorism operations should be cautious, not to harm civilians.”

Russia’s Defence Ministry said the Turkish troops that came under fire were deployed among “terrorist battle formations.” According to co-ordinates given to Russia’s Reconciliation Center in Syria, “there were no Turkish military units in the area ... and there weren’t supposed to be,” the ministry said.

Russian air forces did not carry out air strikes in the area, its statement said.

An Associated Press video showed rubble of a demolished building, a destroyed car and abandoned Turkish equipment at one of the sites the Syrian government targeted in the village of Balyun.

In recent weeks, Turkey has sent thousands of troops as well as tanks and other equipment to Idlib. As recently as Wednesday, Erdogan gave the Syrian government until the end of February to pull back from its recent advances or face Turkish “intervention.”

The offensive has triggered the largest single wave of displacement in Syria’s nine-year war, sending nearly 950,000 people fleeing to areas near the Turkish border for safety. Ankara sealed its borders in 2015 and agreed to step up efforts to halt the flow of refugees under a 2016 deal with the European Union.

Turkish Foreign Ministry spokesman Hami Aksoy warned that the movement of migrants to the West could continue if the situation in Idlib deteriorated further.

“Some asylum seekers and migrants in our country, worried about developments, have begun to move toward our western borders,” he said. “If the situation worsens, this risk will continue to increase.” However, he added that there was “no change” in Turkey’s migration policy.

Saying “significant numbers” of migrants and refugees had gathered on the Turkish side of the border with Greece, Greek Prime Minister Kyriakos Mitsotakis tweeted that no illegal crossings would be tolerated and that Greece was not to blame for the “tragic events in Syria.” He called a meeting of top cabinet and military officials for Saturday.

Greece deployed police and military patrols to the border. Police said an estimated 1,200 people had gathered late Friday and periodically tried to push through. Some managed to cut holes in the fence close to the Kastanies border crossing and attacked police with stones but were driven back with tear gas and stun grenades.

A police officer told The Associated Press that pressure was mounting along the 200-kilometre (125-mile) land border.

“Along the entire length of the border, there are much increased attempts to break through,” said the officer, who spoke on condition of anonymity because he wasn’t authorized to discuss the matter with the media. “But police and army units are constantly deterring them.”

Off Turkey’s west coast, several rubber dinghies with groups of people aboard headed for the island of Lesbos. However, migrant crossings from the Turkish coast to Greek islands are a daily occurrence, and Greece’s coast guard said there was no notable increase in arrivals. Five boats carrying a total of 151 people had arrived – a fairly average daily number – and the coast guard said there were no reports that Turkish officials were allowing migrant boats to sail unchecked. 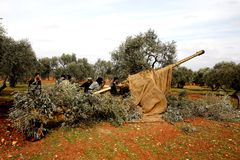 Opinion
NATO must stand with Turkey against Russia to prevent a humanitarian catastrophe in Syria
February 27, 2020 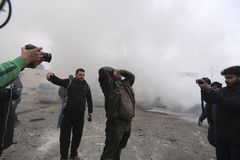