Despite repeated denials by the Pentagon, an escalating wave of U.S. air strikes in Somalia has killed civilians and could constitute war crimes, Amnesty International says.

The attacks by U.S. drones and aircraft, which have dramatically increased under President Donald Trump, have hit more than 100 targets across Somalia over the past two years, killing several hundred people. The U.S. military has insisted that every victim of an air strike was a “terrorist” or a “militant,” but Amnesty says it has obtained strong evidence of more than a dozen civilian casualties in just five of those attacks.

“The attacks appear to have violated international humanitarian law, and some may amount to war crimes,” Amnesty says in a report to be released on Wednesday.

Because most of Somalia is inaccessible to independent observers, the U.S. air strikes have been shrouded in secrecy. In most cases, the only official version is a brief press release by the U.S. Africa Command, known as AFRICOM, which controls the Pentagon’s forces in Africa.

Every few days, and sometimes almost every day, AFRICOM announces that its air strikes have killed terrorists in Somalia. Each announcement includes a death toll for the alleged terrorists – adding up to more than 550 dead since the beginning of last year.

But this claim is false, according to the new Amnesty report. Amnesty investigated five of the U.S. air strikes – a small fraction of the more than 100 air strikes over the past two years – and found evidence that 14 civilians were killed in those five attacks alone. Its researchers also heard unverified accounts of other civilian casualties.

The Amnesty report is based on more than 150 interviews with eyewitnesses, relatives, experts and other sources, along with an analysis of photos, satellite imagery and munitions fragments.

The secrecy surrounding the U.S. air strikes “is actually a smokescreen for impunity,” said a statement by Amnesty researcher Brian Castner. “Our findings directly contradict the U.S. military’s mantra of zero civilian casualties in Somalia.”

In March, 2017, just two months after taking office, Mr. Trump signed an executive order that declared the southern part of Somalia an “area of active hostilities.”

This order, in effect, reduced the burden on the U.S. military to ensure that civilians aren’t killed by U.S. strikes, and allowed it to target any adult male in proximity to Islamist fighters or living in villages sympathetic to the Islamists, according to sources cited by Amnesty.

The executive order by Mr. Trump sparked a surge in U.S. air strikes. In the last nine months of 2017, there were 34 air strikes by U.S. forces in Somalia – more than the total number of strikes in the five-year period from 2012 to 2016.

Since then, the attacks have continued to escalate rapidly. There were 47 air strikes by U.S. forces in Somalia last year, and this was followed by 24 strikes in the first two months of this year alone, targeting the Islamist militia group al-Shabab. More than 550 people were killed in those 71 attacks since the beginning of last year, according to Pentagon press releases.

In its analysis of five of the U.S. air strikes, Amnesty concluded that 14 civilians were killed and eight injured. The strikes were conducted by armed Reaper drones and military aircraft in the Lower Shabelle region near Mogadishu, a region largely under the control of al-Shabab.

In one case, the evidence gathered from witnesses and photos led Amnesty to conclude that three farmers were killed by a U.S. air strike at around 3 a.m. on Nov. 12, 2017, in the village of Darusalaam, as the farmers rested after a night of digging irrigation canals.

Their injuries were described by villagers who recovered the bodies, and photos showed that two of the men were badly disfigured by ordnance fragments. Villagers said they heard the noise of a plane and then an explosion. They confirmed that the farmers were civilians.

Amnesty verified the location of the photos and confirmed that the ordnance fragments were from a weapon launched by the AC-130, a U.S. military aircraft. AFRICOM told Amnesty that it had carried out an air strike in the village at 3 a.m. on that day, but insisted that it killed only “militants” and no civilians.

Somalis whose families were killed or injured in U.S. air strikes have no real opportunity to obtain justice, since their villages are remote and there is no accessible place where they can report their casualties to U.S. authorities, Amnesty said. Even the U.S. procedures for counting casualties and identifying victims are kept secret, it said.

Amnesty is calling on the U.S. government to conduct “impartial, thorough investigations” into the evidence of civilian casualties, and to provide compensation to victims and survivors.

A spike in U.S. air strikes during the Trump era

is raising concerns about unreported civilian

five of the more than 100 air strikes and found 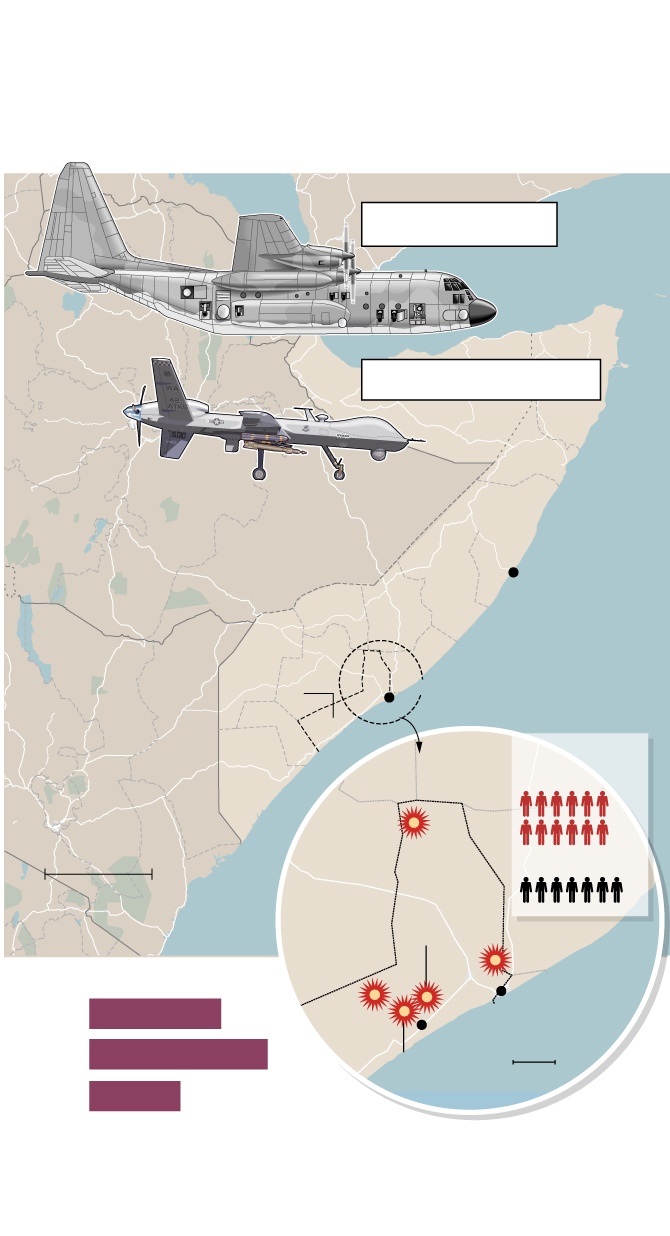 A spike in U.S. air strikes during the Trump era is raising

International investigated five of the more than 100 air 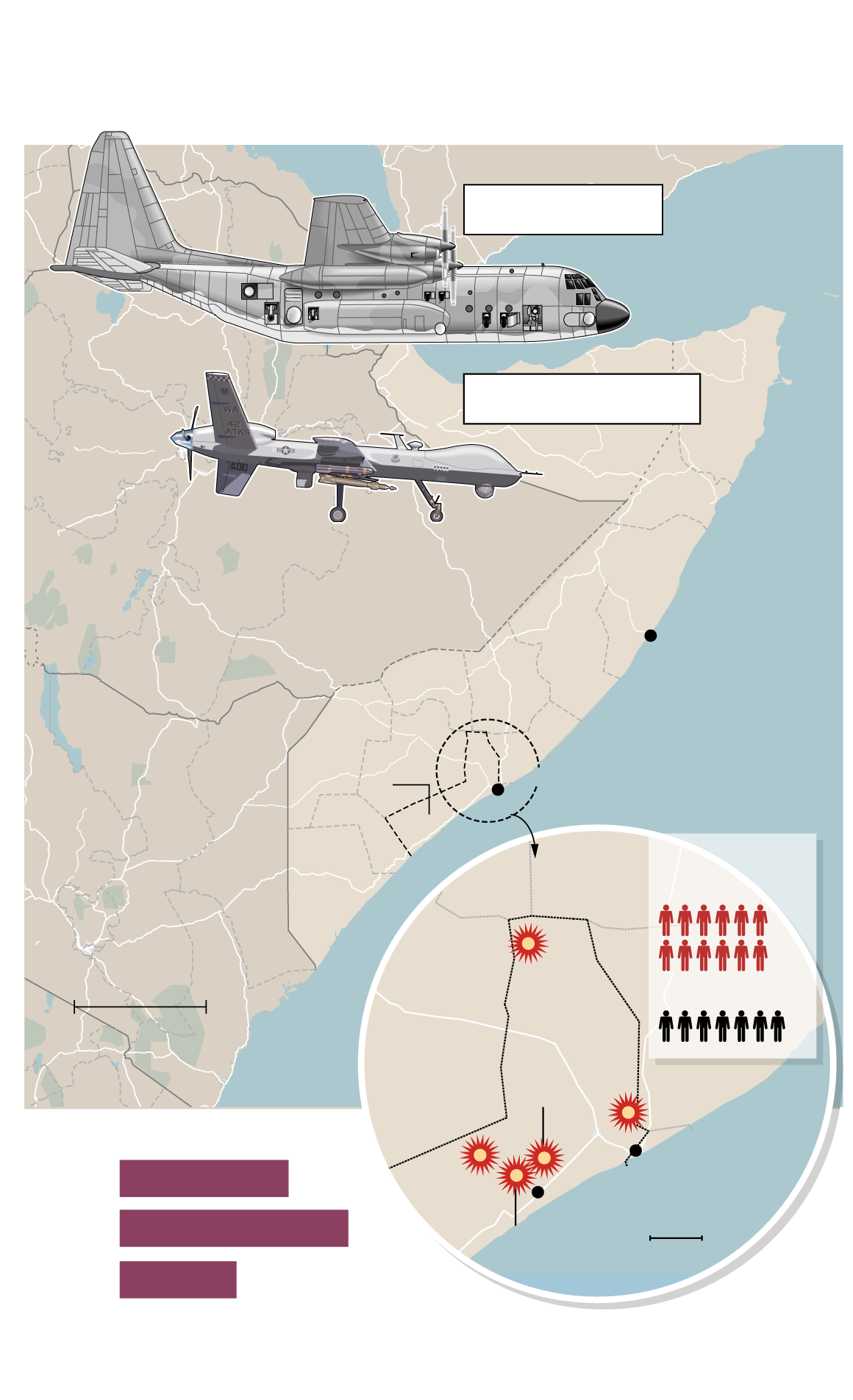 A spike in U.S. air strikes during the Trump era is raising concerns about unreport-